“With God on Our Side,” the new anti-Israel movie produced by an evangelical pastor and aimed at evangelical audiences, is touring America this month, with anti-Israel British Anglican priest Stephen Sizer in tow. On October 27, it was originally going to be screened in the U.S. Capitol Visitor Center, doubtless hoping to appeal to young evangelical Congressional staffers, whose numbers and influence likely will increase in the new Congress. Now, for whatever reason, it instead will screen at a Lutheran church on Capitol Hill.

The Evangelical Left is anxious to neutralize evangelicals as America’s typically most pro-Israel demographic, especially by focusing on the plight of Palestinian Christians, who are portrayed as victims exclusively of Israeli oppression. “With God on Our Side,” predictably, portrays pro-Israel Christians as mindless zealots indifferent to Palestinian suffering and exploiting Israeli Jews as merely tools for precipitating the Second Coming. Hapless quotes from Christian Zionists are contrasted with thoughtful articulations from Palestinian Christians and other pro-Palestinian advocates. 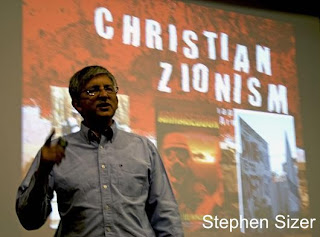 “Aspects of this belief system lead some Christians in the West to give uncritical support to Israeli government policies, even those that privilege Jews at the expense of Palestinians, leading to great suffering among Muslim and Christian Palestinians alike and threatening Israel’s security as a whole.”

Rev. Sizer essentially advocates a Helen Thomas sort of theology. His blog even acclaimed Thomas for exclaiming that Jews need to “get out of Palestine” and go back to Poland or wherever. “Bring it on,” Sizer enthused in response to Thomas’s promise to keep speaking out. He has further explained:

“With God on our Side” is a direct challenge to the foolish idea that Christian Zionism has any biblical or moral foundation. It is an oxymoron, as absurd as to suggest that biblical Christianity and apartheid are in any way compatible. The Dutch Reformed Church in South Africa tried and failed and eventually repented. Would that Christian Zionists did the same.”

Sizer is incredulous that Christians would “justify on theological grounds the theft of land, the demolition of homes, the destruction of property, the creation of ghettos and the denial of fundamental human rights, in order to create what is increasingly becoming a racist state.” He insists in his blog that Christian support for Israel challenges “our understanding of the gospel, the centrality of the cross, the role of the church, and the nature of our missionary mandate, not least, to the beloved Jewish people.” And he deplores Christian Zionism as a “heresy conclusively refuted by the New Testament.” Sizer and “With God on our Side” are unwilling to accept that many evangelicals and other Christians have substantive reasons for supporting Israel other than a grimacing expectation of the End Times. Israel’s democracy, pro-Western stance, and resistance to Islamist terror are just a few reasons that many Americans, Christian or not, affirm Israel against its many enemies. But Sizer and his film are largely uninterested in the transgressions, and inferior human rights records, of Israel’s primary foes. Nor are they usually willing to critique radical Islam.

“With God on our Side,” with Sizer and producer Porter Speakman of Colorado as the chief promoters, is gaining an audience among some evangelicals. They screened their film at prestigious evangelical Wheaton College earlier this year. (The film features a Wheaton professor.) And “Christianity Today,” a flagship evangelical magazine, favorably reviewed the film this Summer. “A Christian pastor, Speakman asks such Zionists to reevaluate their absolute support of Israel,” the review observed. “He presents historical context, theological perspective, and on-the-ground impressions.” Agreeing with the film that “Palestinians’ claims to the land cannot be easily dismissed,” the reviewer uncritically accepted the film’s premise that “ordinary Palestinians, including fellow Christians, are being hurt by Israel’s policies,” without examining other more potent threats to Palestinian Christians. Admitting that “some” might see the film as “slanted,” the reviewer defended the film for ostensibly “telling a story” that its “intended audience has not heard.”

That audience is supposedly naïve and mindless evangelicals who have been insulated from any criticism of Israel until exposed to “With God on our Side.” It’s not clear what caves or compounds those pious fools live in. But this film, no less propagandistic and vapid than it alleges its Christian Zionist targets to be, offers a simplistic counter narrative that portrays Israel as the moral equivalent of apartheid South Africa. The tiny percentage of Palestinians who are Christian are useful props for this film and its advocates who, like much of the Evangelical Left, are not typically interested in persecuted Christians unless Israel is the villain.

Anti-Israel activists often especially fault U.S. evangelicals for America’s pro-Israel tilt. But polls usually show that pro-Israel sentiment in America includes not just evangelicals but also Mainline Protestants, Catholics and Jews. End times scenarios do not motivate the pro-Israel beliefs of most Americans or even most evangelicals. But “With God on our Side” constructed a cheap straw man based on stereotypes, maybe because it could not proffer more substantive arguments.

Porter Speakman, Jr. & Stephen Sizer to Tour with the Film 'With God On Our Side' in the U.S. in October - Christian Newswire

Whose Side Is God On? - BPB (Jan Markell)

What is Zionism / Christian Zionism? - GotQuestions.org