As Sharron Angle, Newt Gingrich and others have started making Islamic law (Sharia) part of the national debate, and Oklahoma actually moves to outlaw it, there is a new attempt to confuse the American people about the nature of the threat we face. It’s a large-scale mainstream media effort to deny both that there is any attempt to bring Sharia to the United States, and that Sharia is anything to be concerned about in the first place. Unfortunately, there is plenty of evidence of attempts to establish the primacy of Islamic law over American law, and much to indicate that Sharia is anything but benign.

Characteristic of the media campaign was a Saturday Religion News Service story by Omar Sacirbey, which asserted that “no one in Oklahoma, Michigan or anywhere else is calling for Shariah — including and especially Muslims.” Sacirbey quoted Ibrahim Hooper of the Hamas-linked Council on American-Islamic Relations (CAIR) – without noting, of course, CAIR’s status as an unindicted co-conspirator in a Hamas funding case, the jihad terror convictions of various former CAIR officials, or the Islamic supremacist statements made by Hooper and CAIR co-founder Omar Ahmad. Hooper said:

“This is another right-wing fantasy that started on the hate blogs and worked its way into the mainstream media. Where is the evidence of the takeover?”

The RNS story goes on to cite as evidence the New Jersey judge who declined to charge a Muslim with sexual assault on his wife because under Sharia, a woman may not deny sex to her husband at any time under any circumstances. This remarkable introduction of Islamic law into American jurisprudence was overturned, leading those who would dismiss the threat of Sharia to claim that its spread in the U.S. is simply a matter of one lone example. Unfortunately, there are more. 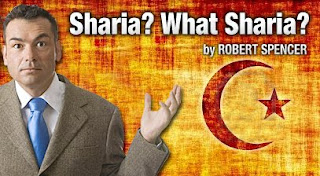 There have been successful attempts by Muslim workers at meat packing plants in Nebraska and Colorado to force their employers to restructure the work schedule to give them special breaks at times for Islamic prayer. These efforts initially met with protests from non-Muslim workers, who complained to no avail that the special breaks given to Muslims forced the non-Muslims to work longer hours, and thus discriminated against them. The result? Muslims in these plants have special privileges that other workers do not have – in accord with the privileged status Muslims enjoy over non-Muslims in Sharia societies.

Another example of Sharia insinuating itself into American life are the footbaths that have been constructed in airports and schools for the ablutions prescribed before Islamic prayers. Imagine the outcry if holy water fonts were being placed in airports for Catholic travelers – but Islamic footbaths have been dismissed as non-religious, on the pretext that anyone can use them. It would be interesting to see what would happen if a non-Muslim tried.

Yet Sharia, claims Jehan S. Harney, an Egyptian-American filmmaker writing in the Huffington Post, “is simply the rules that govern the lives of Muslims from daily prayers and fasting to inheritance. Sharia does not - and never will - apply to non-Muslims.”

Harney doesn’t mention the Christian women who have been threatened and sometimes even killed in Iraq and elsewhere for not wearing the Islamic headscarf. Nor does she mention the elaborate superstructure of Sharia laws governing the conduct of non-Muslims in Islamic societies, and mandating for them a second-class status that deprives them of basic rights. Just this week, Catholic bishops have been meeting in a synod to discuss the plight of Christians in the Middle East. Reports on the status of those Christians noted that they routinely face job discrimination (in accord with the Sharia provision that non-Muslims must not hold authority over Muslims) even in states where Sharia is not fully enforced; they have immense difficulty getting permits to build new churches (which is forbidden by Sharia); and converts from Islam must always live under the threat of death (in accord with Sharia’s death penalty for apostasy).

Eventually Sharia advocates will attempt to bring even those elements of Sharia to the U.S.: there is no form of Sharia that does not contain them. But if the mainstream media has its way, Americans will sleep on as those advocates continue to work.

Religion of Peace?: Why Christianity Is and Islam Isn't - Robert Spencer (Book)