Europe and Russia Cozying Up

The leaders of Germany, Russia and France convened in Deauville, France early this week for a diplomatic summit at Sarkozy's invitation to "reset" Russo-European Union relations. One issue on the table was the possibility of Russia's cooperation in a new US-led pan-European missile defense system. That's right, missile defense in Europe has not been trash-binned completely.

Russia has maintained a peaceable-enough attitude toward NATO during the 19 years since the dissolution of the USSR. Several former Warsaw Pact nations have been welcomed in, and with the entrance of Albania and Croatia in 2009, the organization has enlarged to 28 member states. Since NATO was formed with the Soviet Union as the major enemy, it has naturally proved difficult for Russia to truly trust the organization. US President Barack Obama scrapped George W. Bush's missile defense plans for Poland and the Czech Republic in September 2009, to Russia's warm approval. Now, however, Russia may partner with the rest of Europe in producing a missile defense system. 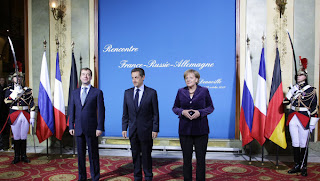 Angela Merkel of Germany, Dmitry Medvedev of Russia and France's Nicolas Sarkozy joined each other this week, having replaced Schroder, Putin, and Chirac since the last meeting in 2005. Past summits were held sans consultation with other EU states, angering many NATO members. This most recent meeting isn't going quietly unnoticed. Russia's neighboring countries have also been concerned, along with the US, that Russia is looking to buy French warships.

This week's summit was meant to be a brainstorming session in preparation for further summits in November. On the agenda: improving Russian/NATO alliances, missile defense, a new "security architecture" for Russia, visa-free access to the EU for Russian citizens, and energy deals between the EU and Russia. Sarkozy convinced Medvedev to attend November's upcoming NATO summit in Lisbon, and, as of now, Russia intends to send representation to that meeting.

Russia is also seeking to be on the committee that set the EU's foreign policy. "We would like Russia and the EU to be able to take joint decisions," said Vladimir Chizhov, Moscow's ambassador to the EU, "We want our relationship with the EU through the political and security committee to be formalized, to be more efficient." As Chizhov pointed out, "This summit is important because France and Germany are considered the locomotive of European integration."

On the Friday prior to the Beauville triumvirate session, Sarkozy pledged to help pay for and develop a US-led anti-missile shield for the EU's NATO members. He also offered to extend the missile defense shield to include Russia, if Medvedev were willing to participate. Now that Medvedev plans to attend the NATO Summit next month, he is inching closer to possible inclusion in deals that will decrease Russian and US stockpiles of missiles and nuclear arms while providing Russia with nuke protection.

Relationships between Obama, Medvedev, and Sarkozy have cozied just a little over the past year for practical reasons. Iran's progressing nuclear capabilities have encouraged the US, the EU, and Russia to cooperate in order to protect themselves. Yet Russia has continued to help Iran further its nuclear aspirations. In the end, Russia does what suits Russia, which may or may not lead to greater peace in the future.