To date, since the 9-11 terrorist attacks, the cost of the wars in Afghanistan, Iraq and other items associated with the war on terror has been $1.292 trillion, according to a September 2 report by Amy Belasco, Specialist in US Defense Policy and Budget. Approximately 15% of the increase in national debt since September 2001 has been related to defending America against Islamic terrorism. That seems like a small portion of the debt considering that the war against Islamic aggression - the peaceful religion, mind you - has been ongoing for nearly a decade. Keep in mind, however, that Islamic terrorists were costing Americans billions of dollars in the years leading up to 9-11. 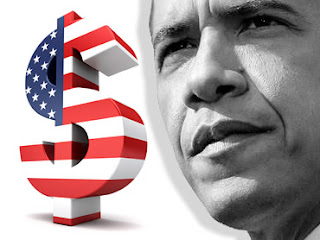 The acceleration in the national debt that has occurred since the last year of the Bush Administration and the first two years of the current Administration is related to economic bailouts - more accurately described as unconstitutional socialism. Given the action of the Federal government, one may assume that the fastest track to a socialistic government is by bankrupting the nation, its economy and its citizens so they are so beholden to the government that freedoms and rights will be forfeited to the government in return for security - government mandated security. The first net in this trap is socialized medicine and healthcare, which is carefully planned to begin years after this economic collapse.

The entire concept of communism/socialism is put in play by first educating the people in a way they cannot make reality-based decisions. Hence, the public school system. The second step is to separate the people from God. This was done over the years by the slow acceptance of separation of church and state - a communist concept. And the third step is economic destruction so that middle class property ownership and independence is abolished. The November elections will not reverse this process. We must stand as a people vigilant for our God and country. What to do? Matthew 6:33, "But seek ye first the kingdom of God, and his righteousness; and all these things shall be added unto you." The Lord will provide.

Senate Republicans May Not Try to Repeal Obamacare - RedState