The White House monetary policy aims to devalue the American position in the world and bring the nation into alignment with other lesser nations - this is the goal of the White House's Treasury Secretary Timothy Geithner as he seeks to "rebalance" the world economy at the weekend meetings of the worlds top 20 producing nations. The concept of American exceptionalism and leadership appears to be far from the Geithner strategy, the Democratic wonder boy who owed back taxes prior to becoming Treasury Secretary.

The Wall Street Journal reports, Geithner says that leaders of the G-20 "are trying to figure out what is in their self-interest." Geithner thinks that it is in America's self interest to reduce its trade deficit by saving more and reducing US demand for products. That is bureaucratese for having a lower standard of living in America. This is the result of globalization, practiced by every president since Ronald Reagan. The idea was to send jobs overseas that Americans "did not want to do," and import such goods back to the country. Over the decades, politicians have "globalized" the American auto, textile, and its electronics industries, and more to the point America is reliant on other countries like China. 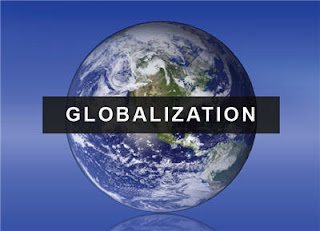 Meantime, the politicians have refused to secure the borders of this nation while allowing illegals into the country to do the jobs that Americans "do not want to do." This is a ridiculous and absurd policy, but it is all part of the "globalization" of America. The true aim of globalization is like that of any one world order - to control the people. By getting rid of the American middle-class, the backbone of the Republic in so many ways - globalists are able to control the lower class with government programs and control the upper class through buying their loyalty with programs and loopholes that make them wealthier. This is called class warfare and its ultimate goal is not what it seems.

Christians know that there will be a one world order establishing the Antichrist. Revelation 13:16,17 says,

"And he causes all, both small and great, rich and poor, free and bond, to receive a mark in their right hand, or on their foreheads; And that no man might buy or sell, save he that had the mark, or the name of the beast, or the number of his name."

The true class to be warred against in these days is Christians. Globalization is the strategy of Satan in that Christians will be prohibited to preach the gospel. We see this beginning even today. But we are commanded to occupy till Jesus returns. Therefore, we need to resist globalization and preach the gospel to the ends of the earth - with even more passion.