CBS television network anchor Lesley Stahl, in the CBS television program 60 Minutes, takes aim at the archaeological dig at the City of David in Jerusalem casting doubt on the validity of the archaeological findings in the City of David excavations and the unity of the city. Stahl has claimed there is no proof that the City of David excavations are really connected to the Biblical King David who reportedly defeated the Jebusite stronghold of Jerusalem and made it the political capital of the Jewish people some 3000 years ago. 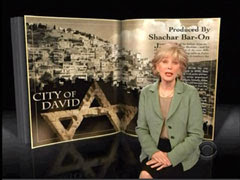 The claim by CBS anchorperson Lesley Stahl that the City of David in Jerusalem is not valid is in contradiction to Bible history and in opposition to Biblical prophecy for this location in the last days.

CBS anchorperson Lesley Stahl, in the CBS television program 60 Minutes, made an effort to destroy the authenticity of the City of David, the original 10 acre plot for Jerusalem found on the slopes of the Kidron Valley in the city of Jerusalem. Stahl accused the Israeli government of using the archaeological excavations as a political tool to indoctrinate the soldiers of the Israeli Defense Force. The CBS reporter said that having the IDF soldiers come through the tunnel through which King David captured the city is an implicit message that King David captured this city for the Jewish people back then some 3000 years ago and thus now belongs to the Jews today.

Lesley Stahl is correct about two things. King David did capture the Jebusite stronghold of Jerusalem 3000 years ago (II Samuel 5). The CBS TV anchor is also correct about the fact that Jerusalem belongs to the Jewish people today - and that is found in the Davidic Covenant, God's promise to the Jews about Jerusalem as found in II Samuel 7. Jesus Christ, the Messiah, said that He will come back one day to build His temple in Jerusalem and rule and reign from this spot among His people, the Jewish people, forever (Zechariah 1:16, 6:12-13, and Psalm 132:13-14.)

CBS TV anchor Lesley Stahl can make all the claims she wants about the City of David and Jerusalem. However, Bible prophecy will be fulfilled.