Dietrich Bonhoeffer Understood the Globalists Were Co-opting the Church

Dietrich Bonhoeffer noticed the globalists were co-opting the liberal American churches in 1930. Today however, it is both the liberal and "conservative" denominations and Christian leaders that are being co-opted by the globalists.

What is happening within American Churches and denominations is not new. Bonhoeffer writes,

"In New York they preach about virtually everything, only one thing is not addressed, or is addressed so rarely that I have yet been unable to hear it, namely, the gospel of Jesus Christ, the cross, sin, and forgiveness, death and life."

"Seeing an opportunity to knock out fundamentalism in New York, the Rockefeller Foundation promptly funded the construction of a church for Fosdick [a liberal pastor], one that would serve as a proper platform for his 'progressive' modernist views."

The progressives for years have sought to co-op Christianity for their own political, progressive agenda. The Rockefellers helped establish the United Nations and sadly we have discovered that the Southern Baptists' Ethics, Religion and Liberty Commission, headed by Richard Land, is a United Nations, Non-governmental Organization. We confirmed this fact with a phone call to the Washington D.C. office of the ERLC on October 12, 2010 and through this January 30, 2007, United Nations press release. America's largest; protestant denomination is aligned with the godless United Nations.

The story is really the same as what Bonhoeffer saw in America in 1930; globalists and progressives seeking to use the church to give themselves credibility while they push their anti-Biblical worldview.

Where are the American Bonhoeffers? Where are the Bonheoffers inside the Southern Baptist Convention; America's largest protestant denomination? Why do Christians attack us when we are simply pointing out the facts and what the Bible instructs? Why are SBC leaders clueless as to what has been going on under their own nose? Why have we, SBC members had to point all this out?

Perhaps what is happening in the American church is the very same thing Bonhoeffer noticed among ministers and seminary students in New York in 1930. Bonhoeffer wrote,

"…without doubt the most vigorous…have turned their backs on all genuine theology and study many economic and political problems. Here, they feel, is the renewal of the Gospel for our time."

He also noted their "self-assurance which lightly makes mock of any specifically theological question [as] unwarranted and naïve."

Today if you question, with Scripture as your basis, one of the "celebrities" of evangelicalism do not be shocked to be called a "pinhead". Many that heard Land's national radio program of October 9, 2010 believe I was the "pinhead" Land was referring to as it was my article that he was responding to when he used this term. I dared to raise theological issues over the economy, politics, and pragmatism.

Bonhoeffer noticed the same flippant, condescending, response by those in church leadership, ministry, and seminary in his day when he wrote,

Bonhoeffer, also warned of "the secularization of Christianity in America." Even in 1930 he believed that most American Christians and churches had forgotten the real calling of Christians:

So what stands in place of the Christian message? An ethical and social idealism born by a faith in progress that - who knows how - claims the right to call itself "Christian". And in the place of the church as the congregation of believers in Christ there stands the church as a social corporation. Anyone who has seen the weekly program of one of the large New York churches, with their daily, indeed almost hourly events, teas, lectures, concerts, charity events, opportunities for sports, games, bowling, dancing for every age group, anyone who has heard how they try to persuade a new resident to join the church, insisting that you'll get into society quite differently by doing so, anyone who has become acquainted with the embarrassing nervousness with which the pastor lobbies for membership - that person can well assess the character of such a church. All these things, of course, take place with varying degrees of tactfulness, taste, and seriousness; some churches are basically "charitable" churches; others have primarily a social identity. One cannot avoid the impression, however, that in both cases they have forgotten what the real point is.

With each passing day I am more and more thankful for the example of Pastor Bonhoeffer; a man that I am sure would be marginalized and criticized by America's Christian celebrities if he were alive and living in America today. 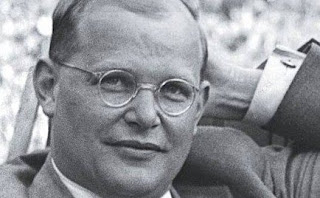 Bonhoeffer was a man of deep conviction that was willing to leave America and return to Germany in order to call the church to be the church. Bonhoeffer knew if he returned to Germany there was the risk of his being arrested and indeed he eventually was.

Christianity in Germany was replaced by Germanism and pastors and religious leaders by the thousands turned their back on Bonhoeffer. In the end, most of his friends abandoned him and he was hung to death by a piano wire at the hands of a government that had largely co-opted the church.

Christianity in America has largely been replaced by progressivism and the stage is set for the coming persecution of the west. Do not be shocked when Christian leaders position themselves so they might be thought well of by the powers that be. Neither be surprised when members of the remnant are criticized and mocked by these same leaders.

Bonhoeffer was not certain he could remain faithful in the face of persecution but because of God's grace and strength Bonhoeffer persevered till the end.

I close with this verse and an earnest prayer that it will encourage you for the spiritual battle that is drastically heating up even within our own churches and denominations.

But we have this treasure in earthen vessels, that the excellence of the power may be of God and not of us. We are hard-pressed on every side, yet not crushed; we are perplexed, but not in despair, persecuted, but not forsaken, stuck down, but not destroyed. (2 Corinthians 4:7-9).

Grave Influence: 21 Radicals and Their Worldviews That Rule America From the Grave - Brannon Howse (Book)