Jerry A. Coyne is not one to pull punches. A professor in the Department of Ecology and Evolution at the University of Chicago, Coyne is an ardent defender of evolution and an equally ardent opponent of any “friendship” between science and religion. In today’s edition of USA Today, Coyne once again makes that point most emphatically.

In ‘Science and Religion Aren’t Friends,” Coyne argues that the worldviews of science and religion are irreconcilable. While he frames his argument in terms of religion in general, his specific reference is Christianity. Science and faith, he insists, are based on irreconcilable ways of understanding the universe.

The debate between Christianity and modern science is not new, of course, but Coyne and his fellow evolutionists are growing impatient at the fact that a majority of Americans still reject the theory of evolution. Over 150 years after Darwin and almost 90 years after the Scopes trial, Americans still reject the theory of evolution as an explanation for the universe and the life therein. Coyne expresses exasperation in light of the fact that only the nation of Turkey exceeds America in the popular denial of evolution.

Over the last fifteen decades or so, three major positions have emerged in terms of the relationship between evolutionary science and the Christian faith. The first position is an open embrace of evolutionary theory. This is the path chosen by theological liberals, who abdicate the biblical doctrine of creation and simply begin with the affirmation of evolution as a brute fact. In some cases, this is done with a full and honest acknowledgment of the theological and doctrinal modifications that are then made necessary. In other cases, there is no honest acknowledgment. 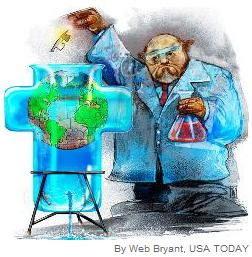 The position at the other end of the spectrum is the outright denial of evolutionary theory. This is the path chosen by conservative evangelicals who acknowledge the Bible as the infallible and inerrant Word of God and then recognize the incompatibility of the biblical revelation and the doctrine of evolution. As Jerry Coyne remarks in his book, Why Evolution is True, “While many religious people have found a way to accommodate evolution with their spiritual beliefs, no such reconciliation is possible if one adheres to the literal truth of a special creation.” Believers committed to a biblical worldview and the trustworthiness of the Bible figured this out long ago.

In my view, any Christian form of theistic evolution is a contradiction in terms. At the end of the day, the theological modifications required by the acceptance of evolution are vast and utterly disastrous for biblical Christianity. The theistic evolutionists think otherwise, of course, and that is one of the great debates of our day.

Oddly enough, it is those who hold to the classically opposed positions who agree that theistic evolution is both unsatisfactory and untenable. Nevertheless, many try to argue for the accommodation of evolution and Christianity. In his USA Today article, Professor Coyne sets his aim at destroying any attempt to argue for the compatibility of Christianity and evolution.

To those who argue that “science and religion are completely compatible friends,” Coyne says:

As a scientist and a former believer, I see this as bunk. Science and faith are fundamentally incompatible, and for precisely the same reason that irrationality and rationality are incompatible. They are different forms of inquiry, with only one, science, equipped to find real truth. And while they may have a dialogue, it’s not a constructive one. Science helps religion only by disproving its claims, while religion has nothing to add to science.

Coyne acknowledges the existence of scientists like Francis Collins of the National Institutes of Health who are both Christians and evolutionists, but he attributes this position to contradictory thinking and a lapse in judgment. He argues that “the existence of religious scientists, or religious people who accept science, doesn’t prove that the two areas are compatible. It shows only that people can hold two conflicting notions in their heads at the same time.”

But Coyne does not believe that there are very many “religious scientists” anyway. He cites the study by Elaine Howard Ecklund that reported the fact that fully 64 percent of American scientists are atheists or agnostics.

Coyne is not a dispassionate scientist. His attack upon religious belief is direct and unsparing. Why does he offer such a hostile approach to theistic belief: He writes:

Because pretending that faith and science are equally valid ways of finding truth not only weakens our concept of truth, it also gives religion an undeserved authority that does the world no good. For it is faith’s certainty that it has a grasp on truth, combined with its inability to actually find it, that produces things such as the oppression of women and gays, opposition to stem cell research and euthanasia, attacks on science, denial of contraception for birth control and AIDS prevention, sexual repression, and of course all those wars, suicide bombings and religious persecutions.

Professor Coyne offers us a clear and forceful defense of naturalism as a worldview, and he is honest enough to show us where it leads. He also dismisses the attempt to forge a middle position between evolution and theism. Both of these intellectual moves should be noted and remembered.

Are science and Christianity friends? the answer to that is an emphatic yes, for any true science will be perfectly compatible with the truths we know by God’s revelation. But this science is not naturalistic, while modern science usually is. Too many evangelicals try to find middle ground, only to end up arguing for positions that combine theological surrender with scientific naivete. As Jerry Coyne makes very clear, there really is no middle ground.

Science or the Bible? - Answers in Genesis

Evolution: Science or Faith? - Grace to You (John MacArthur)