How Evil Works (or, RIP, France)

Well, it’s all over for France.

It probably has been for a long time, ever since the Germans no doubt laughed and wet themselves when the Maginot Line was being constructed.

Jean-Louis Bruguiere told the Israeli press last week that “states should keep within the confines of the law without resorting to extrajudicial means.”

He means, of course, that one must play fair against one’s enemies. The former French “counterterror czar” has gone all Vichy, yet his stance is hardly different from other Western friends, including the U.S.

As the python of Islamic terrorism cuts off the oxygen to Western brains, we see a strategy of capitulation. This method of “confronting terrorism” is one of several reasons that Israel is virtually alone.

One sometimes struggles to understand just how we came to this place in the world today in which evil is good and good is evil.

And yet there is a biblical answer. There is also a “human answer” in a certain sense, too.

The biblical answer of course is the enmity that the Enemy feels toward God and His Chosen People.

I would submit a most fascinating human answer this week, though. I have just finished a sensational new book by David Kupelian, the editor for WorldNetDaily.

How Evil Works is a rare book. It actually provides reasons and answers and insight into our world today. David’s discussion of the so-called “Stockholm Syndrome” in Chapter 3 is riveting. The question of why the Israelis would give ground and negotiate with the very people who want to kill them has always been a puzzle.

It shouldn’t be. It is the same thing that afflicts people like Jean-Louis Bruguiere: sustained terror aimed at people over a long period of time begins to re-shape how the victims think.

Just this morning, I was scanning headlines on Yahoo News and this is a random sampling of words used in the first few headlines: toxic, fail, kill, disappointment, charged.

The human mind can only take so much negativity. If mere headlines cause our shoulders to sag first thing in the morning, imagine what it must be like to live in a country like Israel, which is unique in that the nation has been in a state of war with its hostile neighbors for 62 years.

John Wayne would wither in such conditions. 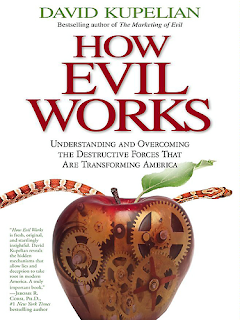 In How Evil Works (I strongly urge you to get a copy of this book), we begin to understand why Israel has made certain decisions.

“If there’s one country that has long existed in a state of siege, it is Israel. Surrounded by Arab states sworn to destroy it, Israel has been subjected to repeated wars of intended annihilation since its 1948 founding. After six decades of such chaos, a significant number of Israel’s leaders and citizens have embraced appeasement of their Arab victimizers.”

Kupelian recognizes that people under siege — whether kidnap victims or entire nations — eventually crack psychologically and begin to look for ways to appease their tormentors. People who are afraid of being murdered will, in an almost childlike way, begin to identify with their captors. This is the Stockholm Syndrome (get How Evil Works for a fabulous explanation of the origin of this term!).

As the global war on terror (a term that Barack Obama loathes) heats up, we see appeasement on every corner. The last time I was in London, I saw a statue of Churchill and wished mightily that it were the flesh-and-blood real thing.

Yet when we begin to understand the motives of our enemies — of Israel’s enemies — some focus returns to our minds. Kupelian — who understands totalitarian brutality in a personal way, since most of his family was wiped out during the massacre of Armenians early in the last century — has a brilliant roadmap of his own for defeating our enemies:

“In reality, anything short of overwhelming, paralyzing, courage-destroying strength is perceived by terrorists and tyrants as pathetic weakness and an engraved invitation to commit more atrocities.”

Kupelian cites Israel’s past methods for dealing with killers and recalls the victories in June, 1967; at Entebbe; and in the destruction of Saddam Hussein’s nuclear reactor at Osirik in 1981. The Arabs totally understood they would not be able to defeat Israel militarily. Israel’s vigilance was key.

This is, by the way, the same tactic used by U.S. Grant and William Sherman in the Civil War. The overwhelming force they brought into the heart of the Confederacy broke the will of that fighting force and brought the Civil War to its conclusion.

Can you imagine the results if Barack Obama or Jimmy Carter had occupied Mr. Lincoln’s office during that time? No doubt the descendants of Nathan Bedford Forrest would still be inflicting terror on the North.

In reality, Bible believers are already in the cleft of the rock. We understand that the sovereignty of God — a concept tragically missed by change agents like Darwin, Spencer, Huxley, Mao, and Putin, to name but a few — is a majestic antidote to our ills today, and to the dangers we all face.

Until the time, though, when He returns to rescue the planet, we must fortify our resolve and recognize that appeasement of our enemies will only result in more murder and terror. We must fortify ourselves with that overwhelming strength when confronting our bloodthirsty enemies.

Israel used to understand this.

Would that the French ever did.

Negotiating in the Middle East: How The Other Side Sees It - Intellectual Conservative

How Evil Works: Understanding and Overcoming the Destructive Forces That Are Transforming America - David Kupelian (Book)

Lieberman: 'We will not be victims of appeasement' - Jerusalem Post