The warnings have come for months - for several years, actually. Each time the e-mail articles contain the almost-guaranteed certainty that the summer months would bring a preemptive attack on Iran’s gestating nuclear facilities by Israel or the U.S. Mideast war would ensue, perhaps even lighting off the Ezekiel 38-39 Gog-Magog attack, according to the warnings.

Then, you might recall, the deadline was reached. If Israel didn’t take out the Iranian nuclear sites by a certain day, the facilities would go online, making any strike against them too dangerous. Radiation would devastate populations surrounding the areas hit. Destruction of Iran’s feared nuclear weapons effort could not be carried out. Iran would thus achieve the means by which to produce plutonium and other byproducts necessary to bring atomic weaponry into its military repertoire. The strike was imminent, the articles I continued to receive warned. The attack had to be accomplished before the nuclear facilities came online. This was it! All-out war in the Middle East!

But the deadline came and went. Neither Israel nor the U.S. struck Iran’s atomic weapons development facilities. The inevitable was thus merely delayed. The war was averted, but the refusal of Israel or the United States to risk setting off conflict only assured that when the war did finally erupt, the world would then face a more deadly foe. The Iranians would now be a nuclear power – or so the fearful rhetoric goes.

How could Israel let such a thing eventuate? How could a madman like Iran’s Mahmoud Ahmadinejad be allowed to have the power that now will guarantee the destruction of Israel at a point, perhaps in the not-too-distant future?

Enter – in my view — the hand of God. The intervention was unwittingly carried out by the human sort, no doubt, but the handiwork of the God of Israel, it seems to me, is all over the matters involved. An unseen entity suddenly has manifested itself in a way that has all but shut down Iran’s nuclear energy/possible atomic weapons production capability. While it is a mysterious cyber-bug that could devastate, particularly, the most highly technical and sophisticated of industrial infrastructures, such as those of America and Israel, it is a number of other nations that are experiencing the illness. 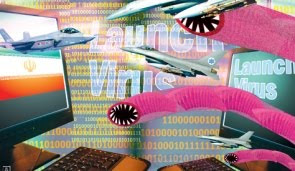 Stuxnet is called a malicious cyber-weapon - a software, or malware, program that was apparently first discovered in June of 2010. It has appeared in China, Indonesia, Pakistan, and India, but Iran seems to have been affected most. The cyber-bug has particularly devastated Iran’s industrial complexes, including its nuclear installations.

Stuxnet, which acts as a computer worm, is inserted into a computer system through a USB port. Since it is thus introduced, rather than through the Internet, the worm is capable of infiltrating networks not connected to Internet.

The Stuxnet is a quantum leap in cyber-bug terrorism, having the ability to determine what, where, and when it wants to attack upon entering a system. It invades, then assaults, industrial computer systems that control infrastructures such as those of power plants, refineries, and others.

According to experts in the field, the Stuxnet, after recognizing its target, does what no other malware program has been able to do. It takes over the industrial target’s supervisory control and data acquisition system (SCADA), and working within this system it is able to manipulate controls and even destroy the facility.

This is what has happened to Iran’s computer, thus the nuclear program, at Bushehr. Iran was poised to start up the plant next month, but has announced the start-up has been set back at least several months. Deputy head of Iran’s Information Technology Company, Hamid Alipour, told reporters that the malware operated undetected in the country’s computer systems for about one year. He said later that despite its discovery and efforts to mitigate the Stuxnet’s destructive effects, they have been unsuccessful.

“We had anticipated that we could root out the virus within one to two months. But the virus is not stable and since we started the cleanup process, three new versions of it have been spreading,” Alipour said.

Speculation is rampant that Israel introduced Stuxnet to Iran’s computers to cause this malfunction. I would really like to think so. Ah…it would indeed be poetic justice… Regardless, whether by Israel or by whomever, it is a welcome relief. Rumors of Mideast war because of Iran’s atomic threat can be pushed down the road for the moment.

Perhaps it will be pushed down the road until the Iranian hordes are destroyed by God when they come with Gog to try to make good on Ahmadinejad’s threat to wipe the chosen people off the earth. Certainly, there is no mention of the Persian forces (Iran) or any other of the Gog-Magog coalition nations using atomic weaponry on Israel.

Quite the opposite will be the case, according to Bible prophecy. It is those attacking satanic forces that will lose five-sixths of their troops - and by weaponry that will far exceed in power anything human scientists have been able to devise. Maybe the Stuxnet is the first small volley in Jehovah’s battle plan for that coming event. Stay tuned…

Stuxnet Rumored Cause of Executions in Iran - PC Magazine

Welcome to the world of cyberwar - Ha'aretz