The Rise of the Suicide Protests

David Be'eri is either much admired or much hated, depending on how you feel about Israel and Jewish heritage. Be'eri is the founder and head of the Ir David Foundation, a non-profit organization dedicated to excavating, preserving and developing biblical Jerusalem, the City of David.

When Be'eri began his project in 1986, the City of David, located just opposite the Old City, was in shambles. Former excavations were hidden beneath heaps of garbage and debris.

Owing to his efforts, today the City of David is one of Israel's most beloved tourist attractions. Some 500,000 tourists visit the site each year. Seventeen archaeological excavations have been undertaken there or are currently ongoing. Annual archaeological conferences at the site attract leading scholars from all over the world.

One of the keys to Be'eri's success has been the close relations he has cultivated with the local Arabs. Hundreds of local Arabs have worked in the City of David on the various excavations.

But in the past few months, beginning around the time the Obama administration began pressuring Israel to curb its sovereignty in Jerusalem, things have begun to change. Leftist groups including Peace Now, Ir Amim, B'Tselem, the Association for Civil Rights in Israel, Rabbis for Human Rights, and Emek Shaveh have begun organizing frequent protests.

According to Udi Ragones, the spokesman for Ir David, the various leftist groups collaborate openly with two Arab groups that have been formed over the past year: Silwannet and the Wadi Hilweh Information Center. Peace Now's Hagit Ofran is often seen working with Jawad Sayam from the information center. One of the information center's employees also works for Emek Shaveh, an organization of anti-Zionist archaeologists.

Over the past month, what began as non-violent protests against Ir David turned violent. A month ago, anti-Israel activists set several cars ablaze. Local Arabs who work with the Ir David Foundation began receiving threats. The car of one such Arab was set on fire.

Two weeks ago, the demonstrations morphed into suicide protests as activists set up a roadblock in the middle of the street, ambushed an Ir David security guard and began violently attacking him. In order to fend off his attackers, the guard shot his pistol and killed one of them.

Using faux footage, the protesters accused the guard of murder in cold blood. The police rejected the accusation. Channel 2 initially backed up the protesters' claim, but later its reporter recognized he had been used.

Last Friday, the violence was ratcheted up several notches when Be'eri was personally targeted by an ambush. As he drove to his home in Ir David with his 13-year-old son, the car in front of him suddenly hit the breaks. Be'eri drove around the car and was greeted by an ambush of demonstrators who attacked him with stones.

Blocked from backing away by the car that had suddenly stopped, Be'eri had to decide between opening fire and driving through the protest. He drove through, hitting two of his attackers. Both were minors. Neither sustained serious injuries and were out and about within hours of the event.

The stone throwers were not the only people who participated in the ambush. Six or seven photographers and at least one employee of the Wadi Hilweh Information Center were also on the scene. The photographers hailed from the far Left Hebrew-language Walla web portal and from several European media outlets. They filmed Be'eri running over his attackers from multiple angles. They then quickly sold the story to the world as a tale of a vicious "settler" who ran over two innocent children on their way home from the mosque, just because he is an evil settler.

But as Ragones notes, "We were actually lucky that the media were there. The photos that were supposed to frame Be'eri showed clearly that the whole thing was a setup."

Not only does the footage show that Be'eri was ambushed. It shows that the photographers were integral members of the ambush team. The children's role was to provoke Be'eri into killing or injuring them by attacking him with rocks. The photographers' role was to photograph the children getting killed or hurt.

The Ir David Foundation accuses the Wadi Hilweh Information Center of organizing the incident. The presence of the center's employees on the scene in the footage lends credence to the allegation. Ir David also argues that the entire episode was the product of close coordination between the information center and the leftist groups that work with it to demonize, discredit and otherwise harm Ir David specifically and Israeli control over unified Jerusalem generally.

What is new about Friday's incident is not its nature, but its location. As Marc Prowissor, the director of security projects for the One Israel Fund, a non-profit that supports stressed Jewish communities in Judea, Samaria, the Galilee and the Negev notes, these sorts of suicide protests have been going on for at least a decade.

Early incidents that had strategic impact on Israel's international standing were the Muhammad al-Dura affair in October 2000 and the Rachel Corrie incident in 2003. In the former, Palestinian security forces worked with a Palestinian cameraman and France 2 to cook up the libel accusing IDF forces of killing the Palestinian boy Muhammad al-Dura. A French court ruled last year that the footage, which shows al Dura moving after he allegedly died, was falsified.

In the second incident, Corrie was brought to Gaza by the non-Israeli, jihad supporting International Solidarity Movement and deployed to block IDF forces from carrying out counterterror operations. Corrie became the poster girl for suicide protesters when an IDF bulldozer operator, who could not see her, ran Corrie over as she sought to block his operations.

Since 2000, there has been escalating cooperation between Israeli leftist organizations with foreign pro-jihad groups like ISM and Palestinian terror and political warfare outfits. This new cooperation first gained prominence as the Israeli group Anarchists Against the Wall began participating in the weekly Palestinian/ISM riots against IDF units at Bi'ilin and Na'alin in 2003.

Prowissor notes that throughout Judea and Samaria, especially around olive harvest season, Rabbis for Human Rights and likeminded radical groups bus Arab protesters into areas where they do not live to stir up and participate in protests.

"Their modus operandi is always the same," Prowissor explains. "They stage violent attacks in front of their own cameras with the aim of provoking local Israelis to defend themselves. For instance, they stone Jewish cars and if a Jewish driver gets out and tries to fend off his attackers, they film him and accuse him of attacking them for no reason."

The weekly protests at Bi'ilin and Na'alin involve Palestinian, Western and Israeli rioters attacking IDF forces and Border Police units with stones and Molotov cocktails. Five months ago, the protesters began using the same tactics against Israeli civilians at Neveh Tzuf in the Binyamin region. A few weeks ago they added the Carmei Tzur community in Gush Etzion to their list of targets. 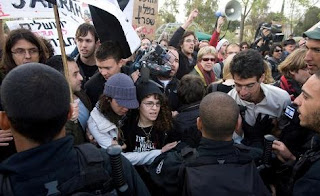 As for Jerusalem, the riots in Sheikh Jarrah every Friday have been going on for several months. They spread to Ir David on Friday.

The reason suicide protests are spreading is clear enough. Suicide protests are an effective means of harming Israel. Just look at the Turkish terror ship Mavi Marmara. The nine suicide protesters onboard who were killed while attacking IDF naval commandos with knives, guns and bats are a bonanza for Israel's enemies. They are being used to drag Israel before the international hanging jury at the UN, the Hague, in US university campuses and throughout Europe.

What can be done about this growing menace? How can Israel defend itself against it?

Suicide protests work on three levels simultaneously. To neutralize their impact, Israeli citizens and officials have to develop strategies to contend with them on all three levels.

Bearing this in mind, the police and the IDF should begin aggressively arresting everyone who participates in these riots. Moreover, they should be directed to investigate all organizations suspected of planning, directing or participating in violent protests. When authorities get advance notice of protests, they can and should be preempted. It is legal for the police to arrest the protesters en route to illegal demonstrations.

Then too, cases should be built against sponsoring organizations. Groups instigating violence should be banned.

Suicide protests, like suicide bombs, use violence to advance political goals. In Israel's case, they are used to demonize the state and its citizens in a bid to coerce the government into acting in a manner that endangers it.

Bureaucratic and political tools should be employed to scuttle these efforts. For instance, in the aftermath of Friday's ambush in Ir David, the media watch group Tadmit sent a letter to the Government Press Office requesting that it withdraw the press credentials from the photographers present at the scene. The GPO should act on Tadmit's request and deny or remove press credentials from any self-proclaimed reporter or photographer that participates in violent, illegal activities aimed against the state.

Beyond that, Israeli citizens' groups and the government should actively discredit groups involved in suicide protests. Data should be gathered against participating organizations and should be rapidly released every time an event like last Friday's ambush takes place.

Finally, there is the legal aspect of the suicide protest strategy. The alliance of Arab, Israeli and Western anti-Israel groups use suicide protests as a means of attacking Israel in foreign and international legal areas, like British courts and the Hague. Both private citizens and the government should sue local groups who collaborate with such initiatives for damages. To the extent that enabling legislation is required to bring such suits, the Knesset should pass such legislation.

The local media initially ran the story of Be'eri's ambush just as the leftist-Arab coalition wanted them too. Be'eri was portrayed as an aggressive, violent settler who ran over two innocent Palestinian children for no reason.

But then the suicide protesters overreached. On Sunday they ambushed and stoned a Channel 2 camera crew. Sunday night the truth was out.

Next time they will probably be more careful.

Suicide protests are the newest and, so far, most effective weapon in the political war against Israel. It is the task of the government and citizens alike to develop and implement strategies to blunt their effectiveness.