Obama and the US-Israel Alliance

Israel's opposition leaders spent the past week trying to prove their relevance. On Tuesday, both former prime minister Ehud Olmert and Kadima leader Tzipi Livni accused Prime Minister Binyamin Netanyahu of wrecking Israel's relations with the US. Both Livni and Olmert claimed that Netanyahu is taking a knife to Israel's most valuable alliance by refusing to bow to US President Barack Obama's demand that the government extend the ban on Jewish building in Judea and Samaria for an additional 60 days.

As Olmert put it, "The United States, the great superpower, says: 'You held a building freeze for 10 months, now extend it by two months...'"

"Sure we are an independent state," Olmert allowed, but then he continued, "But doesn't reason, a sense of responsibility and foresight, justify giving two more months?"

Finally, he warned, "We can refuse the efforts by friendly states, but will we then be able to continue to conduct a relationship of goodwill with them in the future?"

So as far as Olmert is concerned, if Israel refuses to bow to the Obama administration's demand that Jewish property rights be abrogated for an additional two months, the US will be justified in ending its support for Israel.

Livni accused Netanyahu of sacrificing Israel's relations with the US in order to placate his coalition partners.

Olmert's and Livni's assaults on Netanyahu made clear that like most of their colleagues on the Left, they believe that relations between countries and relations between governments are the same thing. They recognize no distinction between ties with autocracies like Egypt and Jordan on the one hand and ties with democracies like the US on the other. In both cases, as far as the Left is concerned, alliances or conflicts between nations are determined by the status of relations between political leaders.

Assuming for a moment that Livni and Olmert are right about the nature of US-Israel ties, does it follow that Netanyahu is wrecking those ties by defying Obama? Tuesday's State Department press briefing indicates that this is not the case.

On Tuesday, State Department spokesman P.J. Crowley was asked, "Do you [i.e. the administration] recognize Israel as a Jewish state and will you try to convince the Palestinians to recognize it?

As Rick Richman at Commentary's blog noted, Crowley repeatedly tried to evade answering the question. Reporters were forced to repeat the question six times before Crowley managed to say, "We recognize that Israel is a - as it says itself, is a Jewish state, yes."

As for whether or not the administration will try to convince the Palestinians to recognize the Jewish state, Crowley could not bring himself to give a simple affirmative answer. 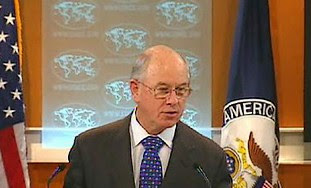 Crowley's unwillingness to state flat out that the US recognizes Israel as a Jewish state and expects Israel's supposed Palestinian peace partners to do so as well means that the Obama administration's basic hostility to Israel is so salient that no amount of appeasing on any specific issue will alter its position.

What this means is that if Livni, Olmert and the Left they represent are correct, and the sole or even major determinant of the strength and quality of US-Israel relations is views of the US president, then Netanyahu's actions are irrelevant. Relations with America are doomed no matter what he does.

Luckily for Israel, Livni, Olmert and the Left they represent have no idea what they are talking about. Contrary to what they would have voters believe, there is a world of difference between how democracies conduct foreign relations and how autocracies conduct them.

Whereas in places like Egypt, Israel's relations with the country are completely contingent on the identity of Egypt's leader, in the US, the president does not determine whether the alliance between Washington and Jerusalem will remain strong. The American people make that decision. And the American people have no intention of abandoning their alliance with Israel.

As a poll released last week makes clear, Americans are far more likely to ditch leaders they believe are harming the US-Israel alliance than they are to ditch the alliance. The poll was carried out from October 3-5 by the non-partisan McLaughlin and Associates survey research group for the pro-Israel Emergency Committee for Israel. It is the most in-depth poll of US sentiment towards Israel in recent memory. The poll broke down respondents by political affiliation, geographical area, religion, race, age, education level, sex, income level and ideological outlook.

The results were extraordinary.

The Right-Left divide mirrors and amplifies the partisan divide. A majority of US conservatives are pro-Israel and only 5% of self-described liberals are pro-Israel.

With everyone from Glenn Beck to George Soros predicting a massive Republican victory in next month's midterm congressional elections, it is clear that the disparity between Obama's policies and the preferences of the American people is about to massively constrain Obama's ability to implement his agenda.

From Netanyahu's perspective, what this means is that if he wishes to maintain US support for Israel, his best bet is to do exactly the opposite of what the Left proposes. He should continue to defy Obama and explain to the American people why Israel cannot accede to the administration's demands.

As the electoral clock runs down it is becoming increasingly clear that it is Obama and his supporters, not Israel, that will be forced to pay a price for Obama's Middle East policies. In fact, those most strongly identified with Obama's anti- Israel positions are already paying a price for their highly unpopular positions. Take the pro-Palestinian lobby J Street for instance. If Obama's policies towards Israel were popular, J Street wouldn't be concerned about The Washington Times' recent exposes about the group.

Those reports revealed that contrary to repeated claims by J Street's leaders, the virulently anti-Israel George Soros is one of its largest financial backers. Moreover, again, in spite of the group's denials, J Street's senior personnel set up meetings with US lawmakers for notoriously anti-Israel Richard Goldstone. Indeed, J Street's co-founder Daniel Levy accompanied Goldstone to his meetings on Capitol Hill.

As things stand today, the group that positioned itself as Obama's chief defender in the American Jewish community is teetering on the verge of collapse. J Street's credibility is in tatters and the administration that sought to empower J Street is now distancing itself from the group.

J Street's central contention is that American Jews stand to the left of pro-Israel groups like AIPAC. By staking out a position to the left of AIPAC - and in line with the White House's policies - J Street claims it serves as the true voice of American Jewry. But another recent poll shows that this is untrue.

A survey of American Jewish opinion published this week by the American Jewish Committee shows that J Street's agenda is rejected by American Jewry. Whereas 78% of American Jews voted for Obama in 2008, today a bare majority of 51% approve of his performance in office. As political analyst Larry Sabato noted, "A 50% positive rating for a Democratic president among Jews is, frankly, terrible."

Democrats supported by J Street - that is Democrats who have supported Obama's policies towards Israel - are running scared today. The Emergency Committee for Israel and the Republican Jewish Coalition are running ads against members of Congress supported by J Street to great effect. In Pennsylvania, Democratic Senate candidate and J Street ally congressman Joe Sestak is polling far behind Republican nominee Pat Toomey.

In Chicago, far-left six-term Democratic congresswoman and J Street sweetheart Jan Schakowsky's approval ratings have fallen below 50%. Her unabashedly pro-Israel Republican opponent Joel Pollak is making Schakowsky's record on Israel a pillar of his campaign. For his efforts Pollak was the recipient of Harvard law professor Alan Dershowitz's first ever endorsement of a Republican.

Likewise, in New Jersey seven-term Democratic congressman Rush Holt is facing a tough challenge from Republican Scott Sipprelle. Sipprelle is also pounding his opponent over his ties to the Obama-aligned J Street.

In Florida, Democratic congressman Ron Klein is expected to lose his reelection bid against Allen West. Although Klein is Jewish and West is African-American, West has been running to Klein's right on Israel to great effect. Klein has also participated in J Street events.

The Israeli Left's failure to recognize what is happening in the US today is not surprising. After all, the Left has ignored the sentiments of the Israeli people for years. But as the elected leader of the Jewish state, Netanyahu should recognize the truth. If he wishes to secure Israel's alliance with the US, he should do what is best for Israel, not what is best for Israel's Left.