China Emerging as End Time Powerhouse with US in Crosshairs

Americans better take a long hard look at China. Private estimates by MIT indicate that China holds up to $2.4 trillion of US debt, twice as much as estimated by the federal government. If China called its debt, the US would face untenable economic choices. Meantime, China is becoming more and more aggressive against the US in various foreign policy venues. For example, China is entering the Middle East as a major player. DEBKAfile reports that Turkey, Iran and Syria are participating together in a military intelligence alliance that is held together by China. In fact, China replaced the US and Israel as a participant in the Turkey Air Force's annual exercise this year with Chinese warplanes in the skies.

Moreover, the Chinese planes refueled on their way to Turkey at the Gayem al-Mohammad air base in central Iran. It is reported that the planes' crews were welcomed by the Iranian air force commander. China has been a known technology partner in building Iranian missile systems as well as the Iranian nuclear program. The refueling of Chinese warplanes, however, was reported as surprising to the politicians in Washington, DC. China is also in the shadows of Pakistan's nuclear program. The Administration is upset by Chinese plans to build two nuclear reactors in Pakistan, bypassing international rules that bar the sale of nuclear equipment to states not participating in the Nuclear non-Proliferation Treaty. 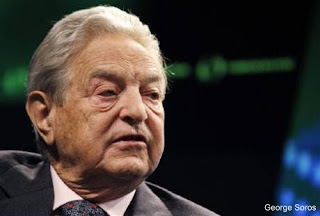 In addition, no-friend to the US, George Soros, is warning that a global "currency war" pitting China versus the rest of the world could lead to the collapse of the world economy. Soros told BBC Radio 4's Today program that China had a "huge advantage" over international competitors because it can control the value of its currency. He said China could also influence the value of other world currencies because they have a "chronic trade surplus", which means the Chinese have a lot of foreign currencies. He said, "They control not only their own currency but actually the entire global currency system." Indeed, China warned that the US should not blame China for its economic problems from a weak dollar.

The current US president said in a recent assessment of Chinese military strength that "[the U.S.-China] relationship has not been without disagreement and difficulty. But the notion that we must be adversaries is not pre-destined." While it may not be pre-destined, it may be inevitable. China holds trillions of dollars of US debt, has funded its military on a $200 billion plus a year trade deficit with the US, manipulates its currency, and assists all the enemies of America, including terrorists. This is not accounting for the millions of forced abortions, human rights violations and religious persecution perpetrated by China.

Proverbs 27:6 says, "Faithful are the wounds of a friend; but the kisses of an enemy are deceitful." Do not be deceived.