Praying for the Peace of Jerusalem

This week I am writing to you from Jerusalem. Next week I will be in Cape Town, South Africa at the Lausanne Committee for World Evangelization's world congress, a gathering of over 4,000 church and mission leaders from around the globe. I have been asked to be on a panel that will discuss "Praying for the peace of Jerusalem," in line with Psalm 122, particularly verse six:

"Pray for the peace of Jerusalem: 'May they prosper who love you.'"

As I plan what I'd like to say, I wanted to give you a preview of some of my thoughts on the subject.

Over the ages, Jerusalem has been a study in profound contrasts: a place of hope and despair, life and death, love and hatred. The city is mentioned 776 times in the Bible, which describes Jerusalem as the dwelling place of God, the throne of the Lord, a city of truth and a holy mountain — but it also calls Jerusalem a place of iniquity, a heavy stone that no one can lift and a cup of reeling and drunkenness.

The prophets agonized over Jerusalem, longing for the day when God would finally restore His presence there. Jesus wept passionately over the city, knowing it would be witness to the most enormous cruelty and terrible destruction imaginable. 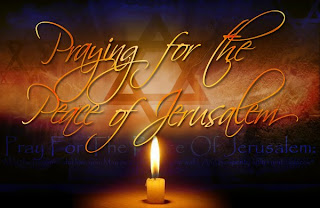 If we are to care for our world, we must follow the biblical mandate — and we must follow Jesus' example — to love and pray for the peace of Jerusalem. Like His prayer, our prayers for the city should include mournful tears as well as hopeful longing. As we pray, we should be aware of Jerusalem's past, mindful of her present, yet always doggedly looking to God's promise for her future.

Jerusalem is a spiritual microcosm of our world today, and her future stands as a great biblical symbol of what our world will one day become under the rule of its Creator when He makes all things new. Therefore, our prayers for Jerusalem ought be informed by all the richness of a full biblical theology.

Modern Jerusalem is a city like so many others, filled with people, poverty, crime and construction. The most recent census was completed in 2003, but since then it is estimated the population of Jerusalem has grown to 764,000 — approximately 470,000 of its people being Jewish and the rest made up primarily of Arabs, the majority of whom are Muslim. Jerusalem is an intensely devout city: approximately 50% of the Jewish population is religiously Orthodox. An estimated 1,204 synagogues, 158 churches, 72 monasteries and 73 mosques are located there.

Jerusalem also has the highest poverty rate of any city in Israel, with over 40% living below the poverty line. That includes over 50% of all children who reside there.

Politically, Jerusalem is as divided as any city possibly could be. Israel has declared all of Jerusalem to be the undivided capital of the Jewish state, but no embassies are located there and Palestinians claim East Jerusalem as the future capital of their own state. During 4000 years of struggle for control of Jerusalem, over 118 separate conflicts have been waged — everything from religious uprisings to military campaigns.

Jerusalem today is not a city of peace, and yet Psalm 122 instructs us to pray for her peace and her prosperity. How do we do that?

Since the Scriptures tell us to do good "especially to those who are of the household of faith" (Galatians 6:10), I believe that our prayers for Jerusalem should begin by interceding for the people of God living there. Messianic Jews, Arab Christians and believers from various nations comprise a small minority of Jerusalem's inhabitants, but I think we ought to pray especially for their peace. Some cooperation and fellowship among believers does exist and has grown in recent years, but we still need to pray for unity and love among the followers of Christ in this city.

Using our Messiah's prayer in John 17 as a model, we can pray earnestly for the humility, strength and sacrifice needed to pursue peace within the diverse family of God living in Jerusalem. The desire for unity must come from the heart, and must be seen in personal examples set by congregation leaders there.

Second, in a place so wracked by injustice and political struggle, as we pray for prosperity we must pray for mercy and justice to flow. Messianic Jews are regularly persecuted and denied citizenship and other rights by a small but zealous group of religious Jews. Palestinian Christians often face danger from Muslim neighbors because of their faith, as well as hardship from Israeli authorities because they are Arabs. Christians from other countries have to be circumspect so as not to have their working visas denied by religious Jews in the government. The Bible reminds us to pray for those in government, to remember the political leadership as well, and pray for all efforts at peacemaking no matter how frail and feeble they appear.

And what about the poverty in Jerusalem? Some Christian ministries are reaching out to help with clothing, food and rehabilitation from drugs and alcohol, but they are relatively few in number. We should pray for increased effort on the part of God's people to meet the needs of the downtrodden of Jerusalem — both Jews and Arabs.

These are all aspects of peace that we can and should pray for the people of Jerusalem. Yet true and lasting peace only comes through the Prince of Peace, and so our most fervent prayers should be directed toward the propagation of the gospel of peace in the city of peace. When Arabs and Jews can sincerely say to one another, "I love you in Jesus' name," the whole world will see the reconciling power of the gospel. Only in Christ is peace between such enemies made possible. Only by the power of the Holy Spirit do we see such reconciliation in Jerusalem, and only as God's people are willing to risk opposition and persecution in order to boldly proclaim His name.

My parents have lived as citizens of Israel in Jerusalem since 1989, but I first visited there in 1984. I had come to Jerusalem with our Jews for Jesus singing group, the Liberated Wailing Wall. I remember nervously setting up equipment for an outdoor concert on Ben Yehuda Street in downtown Jerusalem. As we sang our Jewish gospel music a large crowd gathered — there were Jews and Arabs who stopped to hear us — some believers in Jesus, but mostly unbelievers. Many were clapping, smiling; some were even doing a little folk dancing off to the side. I thought to myself, "Praise God, here we are preaching the gospel right out on the streets of Jerusalem."

Then I noticed out of the corner of my eye a group of young ultra-Orthodox men walking towards us with looks of grim determination on their faces and I knew we were in trouble. Sure enough they came and stood in front of us shouting and screaming. Then one of them reached out and tried to grab the violin bow to wrench it out of my wife's hand.

I'm thinking, "We are about to be martyred right here, right now, in Jerusalem," when up walks a large Israeli, a secular Jew, about 6'4", 250 pounds and completely bald. He says to those Orthodox men, "You touch them and I will touch you!"

That story illustrates both the challenges and opportunities faced by all who stand for Christ in Jerusalem. Jerusalem is home to fair and open-minded individuals, as well as to those who think they would be doing the Almighty a favor by driving away — through any means possible — anyone who stands publicly for Jesus.

As we pray for the prosperity and the peace of Jerusalem, may we recognize the prophetic significance of such peace. We will face opposition from within and without because we are focusing our efforts on a place and a people that are at the center of God's concern for all of humanity. Yet we know that as we pray into the future hope and promise of God concerning this place, we can be assured of His answer from Scripture:

Pray for the Peace of Jerusalem - Jews for Jesus

Future Hope: A Jewish Christian Look at the End of the World - David Brickner (Book)