I have never much agreed with left wing news analyst and political commentator Jaun Williams. He, however, always has a very unique take on a certain news event or political situation. It rarely makes any sense, but unique nonetheless. He was fired this week from the government funded National Public Radio for just being honest. Appearing on FOX News' "The O'Reilly Factor," Williams said,

"I mean, look, Bill, I'm not a bigot. You know the kind of books I've written about the civil rights movement in this country. But when I get on a plane, I got to tell you, if I see people who are in Muslim garb and I think, you know, they're identifying themselves first and foremost as Muslims, I get worried. I get nervous."

NPR fired Williams because his comments...

"were inconsistent with our editorial standards and practices, and undermined his credibility as a news analyst with NPR."

As a news analyst, myself, I have to say that NPR is dead wrong. But I have never been a fan of government-sponsored radio and television. If these people had to make it in the real world of news, without being subsidized by the government, they would be waiting tables and there wouldn't be an NPR - sorry if I have offended anyone who just loves to listen to NPR. But the statement NPR has made about the reasons it fired Jaun Williams speak volumes of the mentality of this bastion of leftist broadcast wannabes. 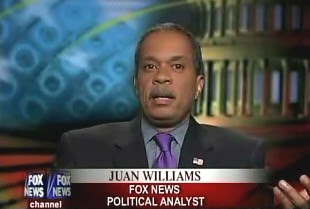 Williams says that he gets nervous when he sees people on a plane dressed in "Muslim garb." Well, let's put it another way. Many people get nervous when they see people who look like those of Middle Eastern descent getting on a plane. Its not often we hear news of someone who is dressed like a Rabbi, Priest or an Evangelical Christian blowing up planes. Its most always a Middle Eastern perpetrator, and its most always a Muslim. Get real, NPR. The facts are the facts - but that has never been the basis of NPR news and commentary for as long as I have been in the news business. NPR just "feels" certain ways about the news. At least that's been the outcome of their editorial policy over the years.

NPR said that Williams' statement "undermined his credibility as a news analyst with NPR." Williams' statement as a news analyst was in character of what a news analyst does. Its NPR's credibility that is undermined to embrace political correctness at the expense of what gives NPR the ability to even espouse its so-called editorial practices - the First Amendment. The First Amendment is neither politically correct nor even political. It is what guarantees our God-given right of free speech and religious freedom. It guarantees as Ephesians 6:20 says, "that therein I may speak boldly as I ought to speak" - Not something that NPR feels is in the best interest of its editorial standards.