Bankruptcy in the Cathedral

The news that the Crystal Cathedral had filed for bankruptcy protection made for an instant sensation. The church established by Robert Schuller, the very prophet of “Possibility Thinking,” was now forced to seek protection from its creditors, listing $55 million in debt, including a $36 million mortgage.

The Los Angeles Times ran “Cracked Crystal” as a headline. The New York Times reported that the “landmark megachurch” would continue, even as it sought protection from its impatient creditors. From coast to coast, the news traveled fast.
A statement posted on the church’s Web site dated October 18 was titled, “A New Chapter for the Crystal Cathedral.” It began by stating that recent financial reports “indicate the best cash flow the Ministry has experienced in 10 years.” But, after describing efforts to forestall action by its creditors, the statement read:

As is often the case, negotiations and decisions do not move fast enough to satisfy all parties. A small number of creditors chose to file lawsuits and obtained writs of attachment. Ultimately, the Creditors Committee decided not to extend the moratorium. For these reasons, the Ministry now finds it necessary to seek the protection of a Chapter 11. The Ministry is extremely grateful for the time and effort expended by the Creditors Committee to date, and looks forward to working with them to finalize a payment plan that is fair to all vendors and consistent with our belief as a Ministry and emerge from Chapter 11 as quickly as possible.

Dr. Sheila Schuller Coleman, daughter of founding pastor Robert H. Schuller and the church’s senior pastor, told The New York Times that the church had been unable to cut its budget quickly enough to avert the crisis. The church pledged to continue its worship services and its weekly “Hour of Power” television broadcast, the longest-running religious broadcast in the nation. At the same time, the church has sought to sell unused property and was forced to lay off staff. 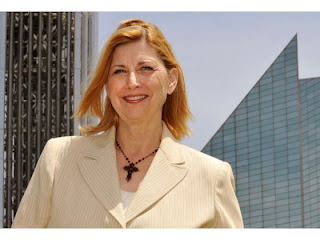 Sheila Schuller Coleman told the Los Angeles Times, “Tough times never last, every storm comes to an end. Right now, people need to hear that message more than ever.” She continued, “Everybody is hurting today. We are no exception.” The elder Schuller commented, ‘Challenging situations are nothing new to our 55-year-old ministry.”

Without doubt, the media impact of the news was guaranteed by the fact that Robert Schuller has been so closely identified with his own version of prosperity theology. How does the ministry built on “Possibility Thinking” declare financial bankruptcy?

Robert H. Schuller founded the Garden Grove Community Church in 1955. Within six years he had led the young church to build a multi-million dollar church facility designed by architect Robert Neutra. In 1981 the church dedicated the famous “Crystal Cathedral,” a massive glass sanctuary designed by Philip Johnson, one of the most famous architects of the twentieth century. The church became familiar to millions of Americans through the broadcasts of the “Hour of Power.”

“Possibility Thinking” was Schuller’s central message. He told his fellow preachers not to worry about repeating themselves in sermons, insisting that every message (he did not like to call his messages “sermons”) must be about the development of a positive mental outlook.

Though ordained in the Reformed Church in America, Schuller minimized historic Christian orthodoxy and stressed instead the message of positive thinking. In his 1982 book, Self Esteem: The New Reformation, Schuller explicitly replaced the message of salvation from sin with a message of rescue from low self esteem. In his 2001 autobiography, My Journey, Schuller told of the massive influence of Dale Carnegie and Norman Vincent Peale on his thinking and theology. He told of his decision early in his ministry to replace theology with therapy. “I realized that every sermon I preached (whether formally from the pulpit or casually at a coffee shop) should be designed, not to ‘teach’ or ‘convert’ people, but rather to encourage them, to give them a lift. I decided to adopt the spirit, style, strategy, and substance of a ‘therapist’ in the pulpit.”

Dennis Voskuil, a professor of church history at Schuller’s alma mater, Western Theological Seminary, placed Schuller within the context of the New Thought movement. “Robert Schuller is indirectly related to a long line of popular religionists who have proclaimed the gospel of this-worldly well-being through positive thinking,” he wrote. “His lineage includes such disparate figures as Phineas Parkhurst Quimby, Mary Baker Eddy, Charles and Myrtle Fillmore, Ralph Waldo Trine, and Norman Vincent Peale. While there are many ideological branches on this family tree, all of its members have stressed a utilitarian message of self-help through some form of mind-conditioning.”

“By several standards, then, Schuller is an unconventional evangelical. But while he may be unusual, he is by no means unique, for he is merely one of the most prominent of a large and growing group of evangelicals who are promulgating the gospel of success.”

Those words were written almost thirty years ago. How does the “gospel of success” deal with bankruptcy? The filing of bankruptcy papers would be humbling enough for any ministry, but how does the very epicenter of “Possibility Thinking” deal with the stark reality of financial calamity?

In his 1986 book, Your Church Has a Fantastic Future, Schuller provided what he called “A Possibility Thinker’s Guide to a Successful Church.” The book is a manual for a ministry built on pure pragmatism, sensationalistic promotion, a therapeutic message, and a constant and incessant focus on thinking positively.

His message about money was simple: “No church has a money problem; churches only have idea problems,” he asserted.

In an odd and upside-down way, the news of bankruptcy at the Crystal Cathedral makes that point emphatically. The most significant problem at the Crystal Cathedral is not financial, but theological. The issue is not money, but this ministry’s message. The “gospel of success” is not the Gospel of Jesus Christ, therapy is no substitute for theology, and “Possibility Thinking” is not the message of the Bible.

It turns out that Robert Schuller offers the best analysis of this crisis with his own words. “No church has a money problem; churches only have idea problems.” The theological crisis in Garden Grove is far more significant than the financial crisis.

The Gospel According to Schuller - Let Us Reason Ministries

What are Some Examples of False Teaching in the Church? - Eternal Ministries (Ron J. Bigalke)