Islam is the Religion, a Muslim is the person who follows Islam

As the Muslim population grows exponentially in the world, so does their influence.

Regarding the 4 million Muslims who have immigrated to Germany in the last 30 years, but who refuse to assimilate into German society, Chancellor Angela Merkel candidly admitted, "Germany's attempt to create a multicultural society has utterly failed."

The Merkel remarks only add more fuel to the growing debate over immigration and Islam. If the world continues to ignore Islam's stated desire to take over the world, it will ultimately give them victory. The following is a brief recap of facts of which everyone should be made aware.

The Qur'an (the Islam Bible) was written by one man, Mohammed, about 1400 years ago. History shows Mohammed was a mass murderer, warlord, and had several wives (polygamy). Mohammed claims he received the Qur'an through revelations from the angel Gabriel in the seventh century (actually a demon). The Qur'an demands that all worship Allah, who was the moon god of ancient Mesopotamia. Allah and Jehovah God are NOT one and the same.

Islam Is NOT a Peaceful Religion

In the first part of the Qur'an, Mohammed included a large number of peaceful passages. Toward the end of the book he penned more violent passages, AND, instructed that if there were any contradictions between passages in the book, followers of the Qur'an were to use the last/more recently penned passage.

The result was that all the peaceful and tolerant passages recorded in the early part of the Qur'an were superseded by the latter more violent passages. The Qur'an is loaded with direct commands and warns that you will burn in hell if you ignore even one of them.

Under Shari'a law, you cannot disagree with the Qur'an. Free speech is not allowed. The word "love" is not in the Qur'an. Neither is "Jerusalem." In 622 AD Muhammad founded the first Islamic state, a theocracy in Medina, a city in western Saudi Arabia located north of Mecca.

When Mohammad was poisoned to death in 629 AD, the family of Mohammad was split as to a successor. Those who followed Bakr were called "Sunni" and those who followed Ali were called "Shiite." 85% of Muslims are Sunni. The Shiites control Iran (Biblical Persia), and have large populations in southern Iraq, Yemen, Bahrain, Syria and Lebanon. Sunni Muslims control or dominate Saudi Arabia, Egypt, Jordan, and several smaller countries.

Saudi's Sunni Muslim population believes that Shiites aren't real Muslims. In Saudi Arabia the law doesn't allow Shiites to hold jobs in politics or judicial posts, to testify in court, or to intermarry with Sunnis.

The most recent reason for the disdain between the Shiites and the Sunnies dates back to the 1980s when Saudi Arabia gave Iraq/Sudamn Hussian money and weapons to fight Iran. In that war, over 500,000 Iranians were killed. Iran has not forgotten and forgiveness is never an option in the Islamic religion. Iran would love to invade and take control of Saudi Arabia - home to Medina and Mecca - considered the two holiest cities for Muslims.

There is no distinction for the Muslim between the political and religious. Islam is less than a religion and more of a religious and political ideology. It demands control over every level of society: legal recourse, beliefs, morals and manners, worship specifics. Islam means 'submission.' The Qur'an demands it.

Muslims expect to take over the world and institute Shari'a law everywhere. Spreading out from the Middle East, Muslims have been multiplying like rabbits in Europe, averaging 6 kids per family. In France, one in ten are Muslim. Many European cities, including Amsterdam, Marseille, France and Malmo, Sweden are already one-quarter Muslim. Paris is now surrounded by a ring of Muslim neighborhoods.

A Muslim man can have up to four wives. With American and European birthrate at less than 2 per family, Muslims are destined to have majorities in the not so distant future. It's simple math.

The Europe you know is changing. According to the German Central Institute Islam Archive, the total number of Muslims in Europe in 2007 was about 53 million. San Diego University recently calculated that a staggering 25 percent of the population in Europe will be Muslim just 12 years from now. Bernhard Lewis has predicted a Muslim majority by the end of this century. 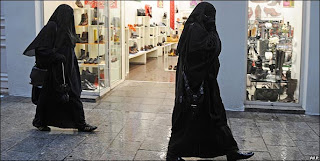 All throughout Europe there are entire Muslim neighborhoods where very few locals reside or even dare to walk. Even the police avoid them at all costs. All the women are berka dressed - covered from head to toe except for the eyes. Husbands, by Shari'a law, walk three steps ahead in public. There are thousands of mosques throughout Europe. These fast-growing neighborhoods are the building-blocks for territorial control of increasingly larger portions of Europe, street by street, city by city. It is the world of parallel societies created by Muslim mass-migration.

In the Netherlands, 60% of the population see the mass immigration of Muslims as the number one policy mistake since World War II. Another 60 percent see Islam as the biggest threat since WWI. They have Muslim official state holidays. The Christian-Democratic attorney general has stated he is willing to accept sharia in the Netherlands if there is a Muslim majority.

Muslims who immigrate/mass migrate do not assimilate into the culture of their new country, refusing to learn the language and demanding their own Shari'a courts of law. In England sharia courts are now officially part of the British legal system. There are about 100 sharia tribunals operating in Britain with Muslim courts deciding cases in London, Manchester, Bradford, Birmingham and Nuneaton.

In France school teachers are advised to avoid authors deemed offensive to Muslims, including Voltaire and Diderot. Many neighborhoods in France are no-go areas for women without head scarves. The Pew Research Center reported that half of French Muslims see their loyalty to Islam as greater than their loyalty to France. One-third of French Muslims do not object to suicide attacks. The British Centre for Social Cohesion reported that one-third of British Muslim students are in favor of a worldwide Caliphate (Muslim rule). Even the history of the Holocaust is vanishing in Europe because of Muslim sensitivity.

In some elementary schools in Amsterdam the farm can no longer be mentioned, because that would also mean mentioning the pig, and that would be an insult to Muslims. Many state schools in Belgium and Denmark only serve halal food to all pupils.

Muslims in the U.S.

There are varying estimates of the number of Muslims in America ranging from 5 to 10 million, and of course, with their high birth rate, they are growing exponentially.

In Hamtramck, Michigan, the City Council has approved Muslim 'call to prayer" to be broadcast on loudspeakers five times a day. Anyone who has ever heard these "prayers" understand the problem. Sounds like a guy with a stomach ache... incredibly discordant!

In Dearborn, Michigan there are so many Muslims in residence that they effectively control the local government. Football practice times were changed at one of the high schools in order to accommodate Ramadan, a month-long time of fasting. Non-Muslim football players had to change normal practice times to accommodate Shari'a law.

President Obama appointed Arif Alikhan and Kareem Shora, both devout Muslims, to key Homeland Security Posts. Shora has referred to anti-U.S. jihadists as heros. Alikhan has referred to Hezbollah as a "Liberation Movement."

And no one gave a second thought when Keith Ellison (D-MN), was sworn into the 110th Congress with his hand on a copy of the Qur'an. Speaker Pelosi had her hand on the Qur'an also.

"We do believe as Muslims the East and the West will one day be governed by Sharia. Indeed we believe that one day the flag of Islam will fly over the White House."

The Organization of the Islamic Conference (OIC) is currently campaigning to have so-called "Islamophobia" recognized by the international community as a form of racism prosecutable under international law. This would include any expression the Islamists find offensive, which in practice would amount to a global gag order on any critical discussion of Islam. Last year, the Obama administration co-sponsored with Egypt a U.N. Human Rights Council resolution against "racial and religious stereotyping," which offered cover to the Islamists in their drive to put any criticism of their religion off limits.

Israel and the Muslims

Israel is in the hot seat due to their proximity in the Middle East to all the Muslim countries. Since 600 AD, God has allowed the Muslims to grow up around them. But the Muslim war against Israel is more than a war against Israel. It is jihad against the West. Israel is simply on the front lines. Without Israel being planted so firmly in the middle east, Islamic imperialism would have moved much faster.

Many in the world, including many misunderstanding Christians, ridiculously argue in favor of abandoning Israel in order to address the grievances of the Muslims. But that would not mean Muslims would all of a sudden change their behavior and values. On the contrary, the end of Israel would not mean the end of our problems with Islam, but only an escalation. It would mean the start of the final battles for world domination. If the Muslims defeat Israel, they will go after the next country in line, until they conquer the world.

A Big Problem to Watch

90% of all the oil coming out of the Middle East must pass through the "Strait of Hormuz," on Iran's western border. Iran could paralyze the world overnight by shutting down that waterway. Is there any chance they won't try? 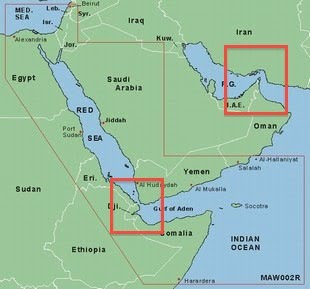 Yemen is another choke point on the other important waterway, the Red Sea. Yemen controls a strait called, "Gates of Tears." 3.3 million barrels of oil ship through there every day.

For obvious reasons, Iran wants control of Yemen and is funding the terrorists there. The terrorists have grown so strong that Yemen has just been labeled, "a threat to global stability" by the U.S. State Department. The U.S. is quietly sending ships, troops and weapons to Yemen.

The U.S. is providing F-16s to arm Saudi Arabia to defend themselves against what they believe will ultimately be a Muslim vs. Muslim war between Iran (Shiite) and Saudi/Yeman (Sunnie). The Muslims are always fighting, even each other (Gen 16:10-12). Saudi jets have already begun dropping bombs in Yemen at the terrorists camps. Over 250 border towns have already had to close, including 50 schools.

Almost 70% of the world's gas and oil reserves are at stake in this region. When this spark finally ignites, it could easily cause oil to shoot up past $200 a barrel, much like the 1973 Arab oil embargo or 1979 Iranian crises. When the price of oil goes up, so does the price food, transportation, business costs, etc. Most everything in life is affected by the price of oil.

All the countries the Bible says will battle Israel in the last days, are in fact, Muslim. Don't be fooled into thinking that this is a struggle over land in Israel, or Muslim extremists in the world. The struggle is about whose god is the real God. Is the true god "Allah," whose Qur'an says Islamic forces will conquer and rule the world? Or is the One True God "Jehovah" of the Judo-Christian Bible, Who says His Son Jesus will rule the world from His throne in Jerusalem? I peeked at the end.... it's Jehovah!