Moral Relativism on the 'Right'

Moral relativism has always been a problem of the left.

Liberals, progressives and socialists of various stripes are fond of imposing their moral code on others – from coercive redistribution of wealth to invented "rights" for people based on sexual proclivities to "choice" to kill unwanted, unborn babies – without any transcendent basis for their convictions.

But now, peculiarly, the "right" is becoming seduced by this intellectually bankrupt concept of moral relativism – to the great peril of the United States of America.

First, let's define moral relativism: Moral relativism is the view that ethical standards, morality and positions of right or wrong are culturally based and therefore subject to a person's individual choice. We can all decide what is right for ourselves.

The Bible strictly and repeatedly warns against this concept with illustrations from history:

"Ye shall not do after all the things that we do here this day, every man whatsoever is right in his own eyes" (Deuteronomy 12:8).

Instead, the Bible reveals God's standards of approved and disapproved conduct for mankind. Like it or not, believer or atheist, this revelation is the basis for the laws that led to western civilization.

The political left historically dismissed this revelation as ancient superstition or, in some cases, sought to revise the clear, unambiguous words of scripture to make them fit into their own political ideology.

"Conservatives," on the other hand, generally sought to preserve these ancient truths, either because they believed them to be divine instructions or because they recognized that they provided a moral code that worked, that provided liberty, prosperity and justice.

However, a new form of moral relativism is infecting the political right, at the very moment it stands on the precipice of sweeping political victory. 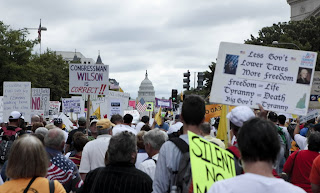 The moral relativism I see on the right – in the Republican Party, the conservative movement and the tea party – works a little bit differently from the moral relativism of the left. It suggests the most pragmatic and effective way to achieve political victory is to dismiss the eternal standards of right and wrong, put them aside, keep them matters of private concern and promote only an economic agenda proponents apparently and wrongly assume to transcend morality.

They base their concept on the idea that "free enterprise" demonstrably works in the real material world in which we live – thus, it is somehow not regarded as one of those sticky and divisive "moral issues."

Of course, that is not true.

The Bible has as much to say about money as it does about salvation from sin. And the Bible uniformly and unequivocally affirms private property. When the children of Israel clamor for a king rather than the decentralized form of government God gave them, God Himself tells the Prophet Samuel to warn them that a king will tax his subjects at the seemingly unimaginable rate of 10 percent! (1 Samuel 8)

What the political right needs to understand is that economics is as much a moral issue as every other we face in America today. No more so, no less so.

So, on what basis do we divide economics from other concerns?

The only excuse is this new form of moral relativism of the right.

This is the central theme of my new book, "The Tea Party Manifesto" – a point few others are making, but one increasingly important to understand if we are to be successful at turning our country around.

This temptation to become, even temporarily, moral relativists of the right is seductive and alluring. It seems like the right way to build winning coalitions. But it just doesn't work. It never has and it never will. It's shortsighted. It fails to address the most serious, root problems we face.

And it fails to recognize the importance of moral absolutes – the idea that there really are right ways of behaving and wrong ways of behaving, for individuals and for nations.

What is moral relativism? - GotQuestions.org

Thinking Biblically About the Economy, Government, and Your Money - Grace to You (John MacArthur)