For nearly thirty years, the U.S. has been blessed with low inflation. There are now signs that our luck is about to run out. The U.S. monetary base has more than tripled over the last couple of years, and all that money is starting to filter into the hands of consumers. Commodity prices are absolutely skyrocketing, and it is inevitable that those price increases will show up at the grocery store.

In his recent article entitled "An Inflationary Cocktail in the Making," Richard Benson lists sixteen key commodities that have seen huge price increases over the past year:

The Dow Jones Industrials average has just had its best September in seventy-one years, rising 7.7 percent. Just in the past month, cotton, sugar, wheat, oil, and rice have risen more than 12 percent. The motor oil in your garage and the Uncle Ben's in your kitchen cupboard outperformed the best traders on Wall Street. 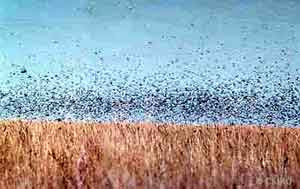 Some of the increases are due to a string of adverse weather conditions. Russia had a severe drought that cut its wheat crop by 30 percent; India is suffering from low monsoon rainfall, which has hit sugar cane yields; and the U.S. has seen growing conditions that were both too wet and too dry. And calamity keeps coming. One report said that Australia faces the worst locust plague in twenty-five years for the 2011 crop.

Years of environmental restrictions on mining are adding to inflation pressure. Even though the demand for metals has been rising, supply is tight: No new mines have been opened in twenty years. The last iron ore smelter to be built in the United States dates back to 1969.

There is a growing problem with rare earth metals, which are used in a wide number of industrial and electronic products. China controls 97 percent of the rare earth market, and it has recently stated that it will no longer export these metals. American firms are now scrambling to find alternative sources before their supply runs out.

The uptick in commodity prices has failed to get the attention of the Federal Reserve. One of the duties of this body is to be on guard for inflation.

Amazingly, the Fed wants to print lots more money because it thinks we are in greater danger of seeing falling prices. The president of the Federal Reserve Bank of New York, William Dudley, stated that the high unemployment and the low inflation the United States is experiencing right now are "wholly unacceptable.... Further action is likely to be warranted unless the economic outlook evolves in such a way that makes me more confident that we will see better outcomes for both employment and inflation before long."

The government has been reporting low inflation because it uses crazy methodology in figuring its numbers. Food substitution is one example of this chicanery. If Kraft Macaroni and Cheese goes up 5 percent in price, the government may still see this component as unchanged because it concludes that people will switch to a no-name brand.

The Federal Reserve might be smoking those left-handed cigarettes, but many savvy investors understand what is going on. The fear of future inflation is the main reason gold and silver has risen more than 500 percent in the past decade. Even the U.S. Mint is adding to inflation. It has officially raised the wholesale pricing above spot on American Silver Eagles from $1.50 to $2.00.

The Bible warns of ramped-up inflation in the last days. The book of Revelation says a person will need to work for a whole day just to earn enough to buy a measure of grain equal to a loaf of bread. To go from fat and happy to a starvation diet would seem to require a transition period. Any movement towards high inflation may indicate we are headed in that direction.

“When he opened the third seal, I heard the third living creature say, ‘Come!’ And I looked, and behold, a black horse! And its rider had a pair of scales in his hand. And I heard what seemed to be a voice in the midst of the four living creatures, saying, ‘A quart of wheat for a denarius, and three quarts of barley for a denarius, and do not harm the oil and wine!’” (Rev 6:5-6).