Gold bullion is again in the limelight, recently again hitting new highs in USD terms. We continue to get questions as to whether gold would be a good investment. For example,

“I have read your book, Global Financial Apocalypse Prophesied, but still cannot determine if you think physical gold is the investment of choice for these days. Would you please comment on this.”

As we have already provided a detailed comment on this metal in the December 2009 issue of EVR, we here provide a short update.

As readers will already know, I do not wish to stake EVR’s reputation on specific investment opinions, instead focusing upon applying Biblical perspectives to world “money” developments. I do not know of anyone who has consistently been proven correct in providing investment opinions on specific investments. No such person exists. Everyone is fallible … especially, of course, when trying to predict the future. I make incorrect judgments about markets and economies frequently. Any reference to my opinions expressed in secular publications would quickly prove that point.

My repeated counsel to investors who have assets to steward, is to broadly diversify one’s investments across as many asset-types as possible, as well as globally. For the far majority of people, this is the safest approach to take. Yes, there definitely will be investments from time to time that appear more attractive than others. Though that may be the case, the average individual investor will likely not succeed in generating consistent gains. There are many reasons for this (for which we do not have sufficient space to explain).

This one fact investors should never forget: The “love of money” (1 Timothy 6:10) is the greatest vulnerability of all mankind. It is at the very root of all evils, as the Bible clearly outlines. However, in practical terms, what does this actually mean? It signifies that a godless world will make “Money” (or Mammon as identified in the King James Version) its god and object of worship and aspiration. That means that there are 6.8 billion people in the world today, that are either vulnerable to, or committed to, doing anything possible to “get money.”

Money is therefore the nexus point of the most competitive and brutally corrupt arena that exits in the entire universe. This thorny thicket is what any investor is up against when they enter the modern world of money and financial markets. Despite that there are supposedly many regulatory bodies and consumer protection agencies around the world who seek to keep the “animal spirits” of money in check, massive financial busts, elaborate thefts and grand lying and cheating in high places will continue (and worsen). In fact, the Bible states this to be the case, even prophesying that such global conditions would be a “sign of the times.” This being the condition of the world today, no specific investment opinion can be sure, nor any one outcome can be guaranteed. Conditions can change rapidly and without warning. The vast majority of investors are therefore no match for the “experts in greed” that serve to brutally rig the global money casino. 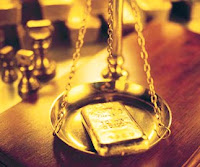 We repeat the question: Should I invest in gold? Without being coy, my answer is that gold is a good investment … from time to time. There are times to own it; other times not. Telling the difference surely tests the skills of the most proficient investment strategists. I surely have no reliable insight into the matter, though I have indeed advocated above-average positions in gold bullion and gold-related shares in global, balanced portfolios over the past 4 or 5 years. It should be noted that these are “globally balanced” portfolios … meaning widely diversified. Even as a professional Chief Investor Officer, my insights and opinions are not sufficiently reliable to warrant sticking all the “eggs” into any one basket.

Despite the hyped fears of currency debasement and an outbreak of inflation on the horizon ahead, long-term government bonds have outperformed bullion by a good margin most of this year (yes, even those of the U.S., a country which still has a federal government budget deficit over 12% of GDP). Looking ahead, given the incredibly unprecedented and desperate conditions around the world, anything is possible … including a run-a-way stock market. (Please see this issue’s World Money Update for an overview of these conditions.) Gold’s rise over the recent years has not been extraordinary. That said, I have continued to hold overweight positions in “globally-balanced” portfolios, but with an itchy finger. Gold is most likely in a bubble phase at present.

All the same, I am not a “gold-phile” ... in other words, one persuaded to see gold as the ultimate money, the sure solution to all of mankind’s monetary problems and corruption. The historical record does not support this conclusion. In my view, many people seem to hold a near-sacred view of gold; with a fervent religious zeal that is beyond reason — what I have called “God’s Money Syndrome.” Frankly, a lot of gold bullion is sold to investors by so-called Christian advisors using this very premise.

Having this opinion apparently is not popular in certain Christian circles. Late last year, Gary North, reading my opinion in a secular forum, wrote a polemic in which I was referred to as a “gold-hating Christian advisor.” Apparently, it is a heinous crime to have both balanced buy and sell opinions on gold. It did not escape notice that a double-standard seems to apply to advisors that are purportedly Christians. In professional circles, were one to disagree with someone else’s opinion on an economic or financial matter, one would try to substantiate one’s opposing view empirically, if at all possible. It would be in poor taste to try to discredit an individual’s view by reference to his/her religious beliefs. Frankly, never before have I encountered a charge of an unforgivable “hate” crime being perpetrated because of an investment opinion.

Returning to the topic of the investment-worthiness of gold, there are two potential vulnerabilities to gold over the long-run that should be kept in mind. Firstly, it is not an interest-bearing asset for the private investor. Many other investments at least offer an interest-rate or a dividend yield. This must be factored into the return calculation. For the average buyer, therefore, an investment in gold bullion can be somewhat of an inert holding. Secondly, it must not be forgotten that the world’s monetary systems are manipulated; its powers fiat, contrived and corrupt. There is no reason why the use of gold cannot be legislatively curtailed at some
point in the future. As it is even now, it cannot be used as money in any store. Many people (remarkably, many of them Christians) imagine that gold is a good investment because it will also be accepted as a transactional metal and therefore will prove to be a good store of wealth. This is not a sure bet nor are such desperate conditions likely this side of the Tribulation, certainly not given the current late state of world interconnectedness and globalization.

In fact, the Bible tells us that a time will come when commerce — the act of buying and selling — will be controlled worldwide. This facility will be invoked at some point during the Great Tribulation period by an evil personage.

Accordingly to the Bible,

“[…] he causeth all, both small and great, rich and poor, free and bond, to receive a mark in their right hand, or in their foreheads: And that no man might buy or sell, save he that had the mark, or the name of the beast, or the number of his name” (Rev. 13:16–17).

These measures surely imply that a barter economy (buying and selling things by trading them outside of the financial system) will have already been banned at that point. A system will be in place that can selectively exclude anyone from an economic transaction. Will this regime be based upon gold? Hardly. It would not be possible to control world commerce through the use of gold either today or in that future Tribulation period.

Of course, we have no idea as to the exact timing of events concerning gold, either those prophesied in the Bible or those being considered by the world’s supramonetary and economic authorities. In any case, pretribulational Christians will already have been raptured by that point. One thing seems sure from Scripture: The world’s final monetary system will not be based upon gold.

In conclusion, a modest investment in a gold-related investment is reasonable. However, to repeat, the best approach to stewarding investment assets is to remain diversified amongst as broad a range of assets-types as possible. As research clearly shows, the average investor is too prone to being pulled into investments (psychologically) at the wrong time, only to also exit at inopportune times.

Booms, bubbles and busts will continue. All the while, the wealth skew of the world continues to widen … the rich becoming wealthier, the rest poorer and more indebted.