Q. I just watched the Glenn Beck show from 8-17-10. He spent the whole show trying to link the North American Indians to a Jewish heritage. He is now promoting Mormon doctrine on his show.... He knows that if he can link the American Indians to Israel he can validate Joseph Smith's claims. When is the church going to wake up to this guy?...He is corrupting the church with ecumenical unity by using national restoration as his unifying point. Do we stand for the real Gospel, or do we stand for America? Please expose this.

A. The focus of the church is always the presentation of the gospel. To reform a political system without changing the hearts of men is ultimately futile. We are on a rescue mission, sent by our Creator, the One who came to earth to pay the penalty for the sin of humanity:

"And being found in fashion as a man, he humbled himself, and became obedient unto death, even the death of the cross" (Phil 2:8).

Professing agreement with this, Glenn Beck appears to hold contradictory ideas. In conflict with Mormon teaching, on his July 13, 2010, broadcast, he said,

"You cannot earn your way into heaven. You can't! There is no deed, no random act of kindness, no amount of money to spread around to others that earns you a trip to heaven. It can't happen. It's earned by God's grace alone, by believing that Jesus died on the cross for you. This is what Christians believe."

"The demands of justice for broken law can be satisfied through mercy, earned by your continual repentance and obedience to the laws of God [our emphasis]. Such repentance and obedience are absolutely essential for the Atonement to work its complete miracle in your life" (Scott, "The Atonement Can Secure Your Peace and Happiness," Ensign [Conference Edition], November 2006, 42).

If Beck truly believes the biblical gospel, he is on an inevitable collision course with the teachings of Mormonism. 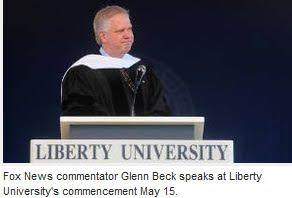 Nevertheless, Beck at times uses Mormon terminology, as at his May 15, 2010, commencement address at Liberty University:

"Beck urged graduates not to underestimate the power of the atonement. When he was 13, his mother took her life. He said he nearly followed in her footsteps. 'As a man who needed the atonement...I read the promise. He will carry your burdens. I made Him a promise. You keep your word and I will keep mine,' he said. 'He will never break his promise, and now it's all up to me'" (David Hylton, Liberty University Online, May 15, 2010).

Of great concern are the "bridges" Beck is building as a representative of Mormonism. In that same commencement address, Beck stated that his appearance at Liberty was "an endorsement of your faith. This is a time when we all need to come together. We may have differences, but we need to find those things that unite us" (Ibid.).

As you point out, there is also the problem of Beck promoting the made-up history of The Book of Mormon as he attempted to "prove" that American Indians are the surviving descendants of Hebrews who came to North America. As the documentary DNA vs. The Book of Mormon demonstrates by presenting evidence from DNA researchers, including Mormon scientists, there is no link between the Mongoloid American Indians and Semitic Jews. Neither has any objective evidence of the great civilizations promoted in The Book of Mormon ever been found (see August 2003 TBC). Consequently, if Beck is serious about basing his faith on the Bible, he must forsake Mormon teachings and the "Jesus Christ" of the Latter Day Saints.

DNA vs. the Book of Mormon (DVD)