By Iranian and Hizbullah accounts, Iranian President Mahmoud Ahmadinejad's visit to Lebanon next week will be a splendid affair. The man who stole his office and then killed his countrymen to protect his crime will be greeted as a conquering hero. Billboards bidding him welcome and Iranian flags will line the roads from the Beirut airport down to the border with Israel.

Ahmadinejad's visit to southern Lebanon will be the highlight of his two-day visit. In preparation for his arrival, in the border town of Maroun A-Ras, Hizbullah has built a replica of the Temple Mount in Jerusalem festooned with an Iranian flag. Ahmadinejad is scheduled to stand outside the structure and throw stones at IDF forces patrolling what he has reportedly referred to as "Iran's border with Israel."

Many Israelis are rattled by Ahmadinejad's trip to our neck of the woods. It is unsettling that the man who personifies the Islamist goal of eradicating the Jewish people will be literally standing at our doorstep, provoking us.

So what new message is Ahmadinejad bringing with him? Who is he communicating with?

Ahmadinejad's visit must be seen within the regional context that it is taking place. Specifically, it must be seen against the backdrop of Lebanese politics. It must also be seen in the context of waning US power and influence in the region. Finally it should be evaluated in terms of Iranian domestic affairs and Ahmadinejad's ongoing struggle with his people who reject his leadership. While Iran's ill-intentions towards Israel remain static, all of the other developments in the region are dynamic.

One aspect of Ahmadinejad's visit is abundantly clear. It is the diplomatic equivalent of a victory lap. Iran's ruler is using his trip as an opportunity to flaunt his position as the colonial overlord of Lebanon.

Moreover, not only does Ahmadinejad's triumphalist visit show that Lebanon has lost its independence and serves as an Iranian vassal state. It exposes as a myth the popular Western tale that Hizbullah is an independent Lebanese political and military force.

Over the past week, many regional commentators and officials have warned that Ahmadinejad's visit may be the prelude to the consolidation of Hizbullah's control of Lebanon. Recent events lend credence to these warnings. 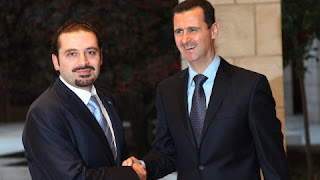 Lebanese Prime Minister Saad Hariri has not had a day of peace since he bowed to Hizbullah pressure and formed a government in November 2009 in which the Iranian proxy was given veto power over all government decisions. Hariri's move put him into the unenviable position of having to bow and scrape before the Syrian and Hizbullah assassins who murdered his father, former prime minister Rafiq Hariri.

Syrian and Hizbullah culpability for Hariri Sr.'s murder in February 2005 has been the focal point of the UN investigative tribunal charged with investigating the crime. The latest reports indicate that the UN's investigators will name Hizbullah officers as responsible for the hit. The UN tribunal is scheduled to announce its findings in the coming weeks.

So Ahmadinejad's visit comes just before his Lebanese proxy force is set to get some serious egg on its chin. A UN pronouncement of Hizbullah culpability would diminish both Hizbullah's standing in Lebanon and its international reputation. Iran has a clear interest in neutralizing the impact of the expected announcement.

To this end, Syria and Hizbullah have steadily escalated their demands that Hariri and his associates in the March 14 movement disown the UN investigation and denounce all their colleagues who implicated Syria and Hizbullah in the 2005 hit. Ratcheting up the pressure, on Monday Syria issued arrest warrants against 33 senior Lebanese officials allied with Hariri for what Damascus alleges are their false testimonies before the UN commission. Hizbullah and its underlings in Lebanese politics have followed suit, demanding that the government disown the UN tribunal and refuse to fund it.

As of the end of this week, Hariri and his allies are refusing to bow to this newest round of pressure. They recognize that if they submit, it will destroy the March 14 movement as an independent political force in Lebanon.

Unfortunately for the March 14 forces, the fact of the matter is that if they take a last stand, it will likely be an exercise in futility. Arabic media reports this week claimed that Hariri and his allies may be seeking Saudi and Egyptian support for Christian and Sunni militias that may be attacked by Hizbullah in the anticipated post-Ahmadinejad visit showdown.

But the official responses to these stories indicate that no one is willing to do more than express rhetorical support for the Lebanese. Thursday, Egyptian Foreign Minister Ahmad Aboul Gheit denied that Egypt is aiding the militias but he also pointed an accusatory finger at Iran. After calling the reports "a lie," Gheit added, "Some people in Lebanon want to have a single control over the country and this issue is linked to Iran."

This lack of Arab support for Hariri and his allies is a direct consequence of the US's effective abandonment of the March 14 forces. While the Bush administration arguably did the most damage when it forced Israel to seek a ceasefire in 2006 and then did nothing to defeat Hizbullah's coup in May 2008, the Obama administration has exacerbated the damage with its abject fecklessness.

Then there is the administration's preening and scraping before Assad. The administration's obsession with the so-called peace process between Israel and its neighbors has made it impossible for Washington to take a concerted stand against Syria which it hopes to convince to negotiate with Israel. Even as Assad visited Teheran and declared his undying devotion to Iran, the administration hosted his deputy foreign minister Faisal Moqdad in Washington and cooed that Syria is "absolutely essential" for "comprehensive peace" and regional stability.

And on the subject of US strategic incompetence, there is US President Barack Obama's senior counterterrorism advisor John Brennan's laudatory comments on Hizbullah from this past May to consider. In a public lecture, Brennan referred to Hizbullah as "a very interesting organization."

Ignoring completely the fact that Hizbullah is controlled by Iran, Brennan said that the US seeks to "build up the more moderate elements," of Hizbullah at the expense of those "elements of Hizbullah that are truly a concern to us."

The US descent into strategic imbecility has convinced Arab leaders that they should avoid getting on Iran's wrong side. With the US even standing aside as Iran paralyzes Iraq's post-election government, no one can take US guarantees seriously anymore. And if anyone had any doubts about this state of affairs, the fact that the US has no leverage with which it can compel the Lebanese government to cancel Ahmadinejad's visit reinforces the glum reality.

The last target audience for Ahmadinejad's visit is the Iranian people. As some commentators have noted, his victory lap in Bint J'Beil and Maroun A-Ras is a message to his own people. On the one hand it shows the Iranian people, who seek the overthrow of their despotic regime that Ahmadinejad is a rising star regionally. On the other hand, Hizbullah's expected violent consolidation of its control over Lebanon is a signal that the Iranian people should be very afraid. Just as its Lebanese proxy will not hesitate to murder its fellow Lebanese to advance the interests of the Iranian regime, so the Iranian regime will not hesitate to use all force necessary to quell any domestic opponents.

If indeed, Ahmadinejad's target audiences are Lebanese, pan-Arab and Iranian, then should Israel be concerned about his visit? The answer to this is yes, and not because his visit, in and of itself increases the likelihood of war. With its complete control over southern Lebanon and its 40,000 missiles, Hizbullah can open a war with Israel at any time. Ahmadinejad's visit neither adds nor detracts from this grim state of affairs.

The reason that Israelis should be concerned is because Ahmadinejad's visit can negatively impact perceptions of the likely political outcome of a war with Israel.

In October 1973, Egypt knew that it did not have the wherewithal to defeat Israel militarily. Israel's strategic advantage over Egypt was clear. But events preceding that war - including Egypt's move from the Soviet to the US side of the Cold War - convinced Egyptian president Anwar Saadat that he could use a limited military victory to gain a strategic political victory against Israel. His gamble paid off as a year later, the US forced Israel to withdraw from much of the Sinai Peninsula.

The insecurity of the Arab states, the rise of Iran in Lebanon and throughout the region, the waning of US regional power, and the voices of sympathy for Hizbullah in the Obama administration all form a political climate that increase the likelihood that Iran will wage another war against Israel though Hizbullah. Israel's options in this context are limited.

Obviously, it must prepare for war and commit itself to defeating Hizbullah as a fighting force and delivering a paralyzing blow to Syria in the event that war breaks out. Israel must also take what political steps it can to impact the political calculations of various regional actors.

Having Ahmadinejad on the border is unsettling. But to properly prepare and contend with the threat he poses, we must understand what he is doing there.

Is Hezbollah About To Take Over Lebanon? - Forbes

Ahmadinejad looks to Lebanon to escape home truths - The Guardian

Report: Arab League to give US 1 month to save peace talks - Jerusalem Post

Connelly after Meeting Hariri: We are Worried about Any Action that May Destabilize Lebanon - Naharnet