A senior Israeli government official last week told me that Prime Minister Netanyahu will assess the effectiveness of international economic sanctions on Iran in December and January. “Decisions will have to made after that,” he said. What kind of decisions? The official wasn’t particularly optimistic that sanctions would work, but when pressed wouldn’t say what Netanyahu might do next. Still, the implication was fairly clear: If Iran’s nuclear weapons program is not severely hampered enough by the first of the new year – by a combination of diplomacy, international sanctions, and/or covert actions inside Iran – Netanyahu and his government feel they have no choice but to launch preemptive military strikes against Iran’s nuclear facilities.

Yesterday, I reported that there are early indications that sanctions are driving up prices inside Iran and causing political unrest. Earlier in the week, I reported that Western governments appear to be stepping up an aggressive covert war to sabotage Iran’s nuclear program. 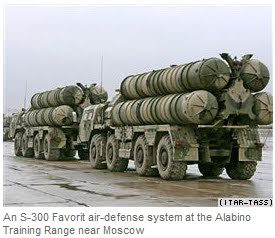 Now, Moscow has curiously announced that it has cancelled the sale to Iran of its state-of-the-art S-300 anti-aircraft missile system. In fact, the Russian company that builds the missile system says it’s going to refund about $166 million which Iran has already paid. The reason for the cancellation is the new U.N. economic sanctions which were imposed on Iran. Noteworthy is that this is a reversal of Russia’s position earlier this year when it vowed to deliver the S-300 system to Iran despite the sanctions. It also goes against the trend of the last decade when Russia was building an ever closer and deeper alliance with Iran. Indeed, Iran is now threatening to sue Russia to keep the contract and deliver the missiles.

What does all this mean? Is Russia fundamentally backing away from Iran, or making a tactical adjustment? Do Putin and Medvedev agree on this decision, or is there a split inside the Kremlin? Could sanctions actually delay a war between Iran and Israel? Important questions all, but it’s too early to say. For now, let’s keep praying for the peace of Jerusalem. No one wants to see more blood spilled in the region.