North Korea’s dying leader Kim Jong-Il, 68, last week began laying the groundwork for transferring power to his youngest son. That transition is important because the range of possible outcomes include an atomic war or a nation that abandons its radical past to become a member of the international community.

North Korea last changed its head of state in 1994 when regime founder Kim Song-Il died and his son Kim Jong-Il took over. Kim Jong-Il’s political introduction began 14 years earlier and even with that lead he needed another three years after his father’s death to completely secure control. Those years were marred by a deteriorating economy while millions starved to death.

The plan to usher the Kim dynasty into a third generation comes very late by comparison. Kim Jong-Il just launched a public relations (PR) campaign to make his little known youngest son, Kim Jong-Un, a household name and build-up the youth’s credibility among Pyongyang’s skeptical elite who see the dynastic succession as a contradiction of Communist ideology.

The PR and credibility-building processes began when North Korea’s Central Committee declared in August Kim Jong-Un “the only successor” to Kim Jong-Il which was followed by a flurry of prestigious appointments. 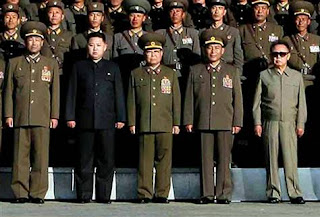 Last week the 27 year-old “crown prince” was elevated to the rank of a four-star general and named deputy chairman of the Military Commission of the Workers’ Party. But Kim Jong-Un will need help before he is ready to lead.

That is why Kim Jong-Il set-up a kind of Communist regency which includes his sister Kim Kyong Hui, 64, who the elder Kim also appointed as a four-star general. It’s not a coincidence that Kim’s sister’s husband, Jang Song-Taek, who handles the day-to-day duties of running North Korea, will work with his wife to guide the young Mr. Kim’s transition. Also acting as a regent is Vice Marshal Ri Yong-Ho who the elder Kim just elevated to the Military Commission’s other deputy chairman position. Ri is expected to tutor the “crown prince” and help curry support for him among the military elite.

Kim Jong-Il’s leadership transition plan faces serious obstacles such as the inevitable dissatisfaction of some military leaders with young Kim’s sudden rise to power. But the most troubling obstacle may be the feeling by Mr. Kim or his regents that he must prove himself militarily by engaging in provocative actions.

The New York Times reported U.S. Defense Secretary Robert Gates expressed a sobering view regarding this aspect of the succession struggle. Gates ascribed the sinking of a South Korean warship by a North Korean torpedo this March to the succession process. Apparently, Gates agrees, sinking the warship was meant to earn Mr. Kim the military’s respect. What else might the young man be willing to do to earn “the military’s respect?”

Last week’s flurry of activity surrounding the generational transition news captured most of the attention but there were other actions that sent mixed signals about the regime’s intentions — some positive and others decisively negative.

Pyongyang renewed its decisively negative war-like rhetoric last week as well. A North Korean spokesman at the United Nations General Assembly vowed his country would strengthen its nuclear arsenal because of the perceived U.S. military threat. The regime also blasted a just completed U.S.-South Korean joint naval exercise in the Yellow Sea. Pyongyang said the exercise proved the U.S. and South Korea are preparing for a “real war” and added Pyongyang will “wipe out” any provocateurs.

Those tough statements keep tensions high and explain why South Korea’s defense ministry seeks a 10% budget increase for 2011. One-third of that increase is intended to buy an anti-missile Aegis destroyer, submarines, and anti-submarine torpedoes to detect and destroy North Korea’s unconventional threats.

Stratfor also reported the elevation of three men with significant negotiating experience with the U.S. Kang Sok Ju, who helped negotiate the 1994 Agreed Framework which earned considerable largess from America for Pyongyang’s failed promise to shut down its nuclear program, is now vice premier. The regime also elevated two nuclear negotiators with experience with the U.S. These elevations may signal that Pyongyang is ready to resolve the nuclear issue and move to one of economic development and international integration, according to Stratfor.

What should the U.S. do during the transition period?

First, we must stand by our allies. We acted appropriately by conducting joint naval exercises with South Korea to demonstrate resolve against Pyongyang’s warship attack in March. More exercises are warranted and we should also sell Seoul sophisticated capabilities it needs to defend itself.

Second, we must lean on China to keep Pyongyang in check. China, which enjoys a special relationship with North Korea, must help stabilize that country. Beijing has consistently taken steps to aid Pyongyang with food and energy supplies in the past and this must continue to prevent a repeat of the economic distress that occurred during the 1994 transition.

China should also help shape the emerging political situation. Reportedly Kim Jong-Il made two visits to Beijing in recent months to bolster China’s support and solicit its endorsement of the transition plan. Beijing should use its influence to wean Pyongyang’s new leadership from its combative ways and seek to bring it into the international community.

Finally, the U.S. should cautiously pursue a relationship with North Korea’s new leadership. It is possible Pyongyang’s renewed interest in talking with South Korea and the elevation of those with the most experience with the U.S. will lead to something positive. However, preconditions must be satisfied before re-engaging North Korea.

We must insist on no more empty promises. We’ve been consistently burned by Pyongyang’s promises to dismantle its atomic programs for aid. Our aid arrives then Pyongyang reneges, which is followed by something provocative like testing an atomic device.

There are many ways North Korea’s new leadership can demonstrate its sincerity. It can stop threatening its neighbors; sign a peace treaty ending the almost 60-year-old Korean War; stop proliferating weapons across the globe; develop economic zones like those in China to diversify its failed economy; abandon its nuclear weapons program; dismantle its ballistic missile arsenal; distribute its massive army-controlled rice stores to the starving to name but a few.

North Korea faces a very uncertain transition. It is not clear that Kim Jong-Un, the “crown prince,” will take the reigns of power. But whoever is the new head of state must choose whether to continue Kim Jong-Il’s combative strategy that threatens nuclear war or reject intimidation for a course of action that brings North Korea into the international community. While the world waits to see which path the new leader takes, America’s prudent strategy should be to upgrade South Korean capabilities and maintain a strong deterrent.

N.Korea on UN List of Countries in 'Protracted Food Crisis' - The Chosun Ilbo