"I'm calling to inform you you're late with your house payment, but we're able to help."

Watch out. Scammers have taken advantage of the large number of foreclosures and have randomly called people's homes, hunting for those who might be a bit behind on their mortgages. Sure, these con artists will help; they'll offer to work out a payment plan, and they'll help themselves to the victim's credit card or checking account numbers or personal identity information. They will not use the money to pay anybody's mortgages but their own.

The financial situation around the world has not improved as quickly as we'd all like. The Department of Labor announced on Friday that the jobless rate dropped in 23 states. That sounds great. The jobless rate rose in 11 other states, though, and the final 16 experienced no change. Las Vegas has earned the top prize for joblessness at 14.4 percent, and Michigan is not far behind at 13 percent. Fifteen states total have jobless rates above 9.6 percent. It's a hard time for a lot of people.

Home loss continues to be a problem, as the scammers have made clear. Foreclosures jumped 19 percent in California during the third quarter. Scammers have demonstrated the extent of the problem; they know that if they just call a few homes, sooner or later they will find somebody struggling to pay their mortgage. 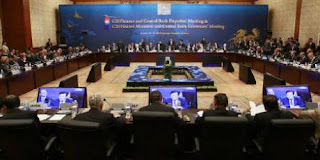 The crisis continues globally. At the G20 meeting this weekend, the world's biggest economic powers gathered to wrestle out ways to keep the world financial markets sane. The International Monetary Fund (IMF) announced that an agreement had been reached among the nations not to devalue their currencies, averting the anticipated currency wars. The meeting has been seen as a success in collaboration among the world's economic powers and is geared toward more global governmental goings on.

"We saw a lot of collaboration at the G20. It's important also to remember that coming from this global slowdown, it was policy collaboration across countries and regions that avoided it being a much worse recession than it has been. The G20 recognize that this collaboration needs to continue in the future to sustain a strong sustained balanced growth over the medium term. And they have set new objectives, how they look at sustainability, (and) the role of the IMF. So I think we're very pleased that this collaboration will continue."

There will be a struggle before and if the world comes out of its economic peat bog. The currency wars have been given a temporary respite. However, plenty of people still believe that a global currency used by all countries would provide the best economic hope for the world. The decades-old idea of a single world currency keeps getting regurgitated. In fact, the IMF offered a promotional report on it this summer. In his report, Reza Moghadam of the IMF's Strategy, Policy, and Review Department said a global currency would work as follows:

"A global currency, bancor, issued by a global central bank would be designed as a stable store of value that is not tied exclusively to the conditions of any particular economy…. The global central bank could serve as a lender of last resort, providing needed systemic liquidity in the event of adverse shocks and more automatically than at present."

No longer would nations trade in dollars or yen or euros. Those who favor a global currency argue it would offer an end to all currency wars and would stabilize world business. However, a global currency would limit the freedom individual countries have to regulate their own interest rates and deal efficiently with domestic economic situations. It would act as a catalyst for even broader global government.

The longer the financial difficulties continue, the greater the world's financial experts will strive to find answers through global cooperation, and the more likely scam artists will find ways to con unsuspecting people out of their money.

We have no reason to fear, though, no matter how dire our financial situations look. We know that God does care for us and this long financial storm does not frighten Him. May we take these opportunities to draw closer to God our Provider and place ourselves squarely under the shadow of His wings.

"Wait on the LORD, and keep his way, and he shall exalt thee to inherit the land: when the wicked are cut off, thou shalt see it." - Psalm 37:34

End of US hegemony, why the Bancor and not gold will be the new currency - Investment & Business News