Time to Reunite Church and State

"Our Constitution was made only for a moral and religious people. It is wholly inadequate to the government of any other."

The U.S. Constitution, indeed our entire republican form of government, was crafted by deeply pious men who were overwhelmingly Christian. It was fashioned within the context and framework of the Judeo-Christian zeitgeist of the time and was further intended to function in harmony with a Judeo-Christian worldview – period. Though leftists may deny this reality, it remains indisputable fact. The historical record is unequivocal.

"It cannot be emphasized too strongly or too often that this great nation was founded, not by religionists, but by Christians; not on religions, but on the gospel of Jesus Christ!"

“Of all the dispositions and habits which lead to political prosperity, Religion and Morality are indispensable supports. In vain would that man claim the tribute of Patriotism, who should labor to subvert these great pillars of human happiness, these firmest props of the duties of Men and Citizens. … [R]eason and experience both forbid us to expect that national morality can prevail in exclusion of religious principle.”

I'll say it: I agree with George Washington. Those godless, postmodern secular-socialists, who, today, hold the reins of government, are unpatriotic. Fringe leftists like Barack Obama, Nancy Pelosi and Harry Reid seek to "subvert" Washington's "great pillars" of "religion and morality" and are distinctly un-American for it.

Part and parcel of Obama's agenda has been to push, at a fever pitch, the most extremist pro-abortion, pro-homosexual, anti-Christian agenda in American history.

Indeed, in contrast with the deeply held religious and moral values embraced by our Founding Fathers, today's America is governed by an "immoral" and "irreligious" chief executive. Barack Obama is the high priest of secular-socialism.

He seeks to undermine – if not altogether dismantle – the American exceptionalism that, hitherto, has been fundamentally woven throughout our national fabric.

He aspires to the lowest common denominator. He seeks to uproot Ronald Reagan's "shining city on a hill" and relocate the "land of the free and the home of the brave" to a much lower altitude, alongside those Euro-Marxist nations he so admires and wistfully desires to emulate.

The U.S. Constitution was neither intended to, nor can it, work in harmony with the postmodern secular-socialist worldview embraced by those on the political left. Such a worldview is, by its very nature, counter-constitutional.

To the secular-socialist, the Constitution is a relevant document only insofar as it constitutes an encumbrance to "progress." It must be circumvented and overcome at all cost, and by any means available. Why else do you suppose President Obama has called our original "contract with America" – the U.S. Constitution – an "imperfect document," a "living document … that reflects some deep flaws in American culture ..."?

Rather than properly viewing our Constitution as a God-inspired tool to be used in furtherance of Washington's "indispensable supports" of "religion and morality," this arrogant little man, with singular resolve and discipline, forges ahead with his thinly veiled, yet wholly destructive left-wing political agenda: Namely, to "fundamentally change America" to reflect his own secular-socialist self-image. 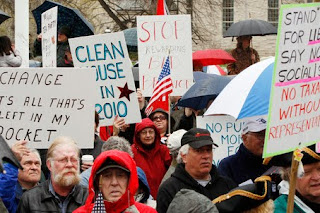 Enter the tea-party revolution (a national clamoring for a return to our nation's founding principles). America has coldly and quite vocally rejected Obama's anti-American agenda.

You've heard it said, but I'll say it again: People with conservative values – particularly Christians – need to take back America. We must take charge of government at every level from the municipal hall to the White House.

It's time for men of the cloth – as they did during the first American Revolution – to exercise true leadership, return to the pulpit and call for national revival, both spiritual and political. As George Washington so astutely observed, the notion that political issues, and those of "religion and morality," are somehow mutually exclusive, is patently absurd. They are one in the same.

Am I calling for a theocracy? Of course not. Am I calling for men and women of strong faith to retake control of all high-level positions of influence in government, academia, media and entertainment? Absolutely.

Pastors, priests and rabbis: It's up to you to address, head-on, these moral issues. Don't be intimidated by anti-theist groups like the ACLU, American's United for Separation of Church and State, People for the American Way and the like. These hard-left outfits engage in dishonest letter-writing schemes and file frivolous threats with the IRS in hopes of silencing you. Don't be silenced.

Guess how many churches have been penalized, or have lost tax-exempt status due to even one of these complaints: Exactly zero. To call these groups "paper tigers" is too strong. They're paper kittens.

Biblical values must once again guide our political and cultural decisions and discourse, or tragically, this great American experiment – having survived longer than any governmental system in existence – may be at its twilight.

How should a Christian view politics? - GotQuestions.org

The Right Hook: From The Ring To The Culture War - Matt Barber (Book)