By Chris Perver
Prophecy in the News

The Turkish government has just completed its largest security review since the end of the Cold War. The National Security Council, a gathering of top military officials, have published a document outlining a list of perceived threats to Turkey's national security. The document called 'Red Book', is considered to be a snapshot of the nation's current security situation, and will form the basis of Turkish foreign policy for the next five years.

Following the election of Prime Minister Erdogan's pro-Islamic Justice and Development Party, Turkish relations with the West and in particular Israel have been at an all time low. Only a few years ago, Turkey was considered one of Jewish state's closest allies in the Middle East, and trusted enough to act as mediator between Israel and Syria in secret negotiations. Relations have since soured, and now the Turkish government considers Israel to be a 'major threat'.

Israel's possession of nuclear weapons is cited as a prime factor for spurring on a regional arms race. While nations such as Iran, who are openly defying the international community by covertly developing a nuclear weapons programme, are now considered to be allies of the Turkish nation.

"The Turkish national security council recently designated Israel as a "major threat" in a document known as the "red book," which lists threats to Turkey, local media reported. The council decided to remove Syria, Bulgaria, Georgia and Armenia from the list of threats. Greece, however, is still considered a threat, whereas Iran was also removed from the list. This is the first time Turkey has designated Israeli activity in the Middle East as a threat."

Interestingly, Iran was also once considered to be one of Israel's closest allies, before the Islamic Revolution of 1979. Now Iran represents possibly the greatest security threat to both Israel and the Western world. 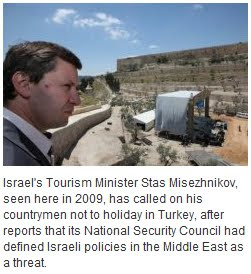 But long before Turkey had even begun writing its 'Red Book' designating Israel as a major threat, God had already documented the geopolitical alliances that would exist in the latter days. The prophecy of Ezekiel foretells how that after the Jewish people had come back to the land, and had been gathered out of all of the nations to which they were scattered, that a regional alliance would arise. This regional alliance will include such countries as Iran (Persia), Turkey (Togarmah, Gomer), Sudan (Ethiopia), Libya and possibly Russia and the former Soviet satellite states (Magog, Meshech and Tubal, Ezekiel 38:2-6).

The Bible declares that in the latter days, these nations will be gathered together to mount a massive invasion of the land of Israel. The Bible also predicts that this invasion force will be completely destroyed by divine intervention. Ezekiel states that God will "send fire on Magog, and among them that dwell carelessly (or securely) in the isles", Ezekiel 39:6, that the nations may know that He is the Lord.

As you can see from today's news, the Bible is always one hundred percent accurate in its predictions. This is because it was written by one who knows the end from the beginning (Isaiah 46:9-10).

But why has God chosen to reveal these things to us? What is the purpose of prophecy, if God is going to do as He pleases anyway? As Jesus said in John 13:19,

"Now I tell you before it come, that, when it is come to pass, ye may believe that I am he (the Messiah)".

As John discovered in the book of Revelation, the testimony of Jesus is the spirit of prophecy (Revelation 19:10). All prophecy ultimately points to Him, and it is in Him that we must place our trust. He is the one who has died for our sins. He is the one who paid the price of our salvation upon the cross. And all those who put their trust in Him shall have the forgiveness of sins (Acts 13:38-39). Turn away from your sins and put your trust in the Lord Jesus Christ for salvation today.

Behold my servant, whom I have chosen; my beloved, in whom my soul is well pleased: I will put my spirit upon him, and he shall shew judgment to the Gentiles. He shall not strive, nor cry; neither shall any man hear his voice in the streets. A bruised reed shall he not break, and smoking flax shall he not quench, till he send forth judgment unto victory. And in his name shall the Gentiles trust (Matthew 12:18-21).

Psalm 83 or Ezekiel 38 - Which is the Next Middle East News Headline? - BPB (Bill Salus)