By Elwood McQuaid
The Friends of Israel Gospel Ministry

An estimated 10,000 protestors showed up on the streets of New York June 6 to rally against the proposed construction of a giant 13-story mosque and Islamic cultural center near Ground Zero where the World Trade Center was brought down by Islamic terrorists on September 11, 2001.

“Building the Ground Zero mosque is not an issue of religious freedom, but of resisting an effort to insult the victims of 9/11 and to establish a beachhead for political Islam and Islamic supremacism in New York. . . . Ground Zero is a war memorial, a burial ground. Respect it.”

Families of victims of the terrorist outrage were joined by thousands of others who were dismayed when a New York City community board in May voted 29-to-1 with 10 abstentions to support the project that would go up near the site where America suffered its single most soul-shattering calamity in modern history.

Daisy Khan, executive director and cofounder of the American Society for Muslim Advancement, claims the $100 million project would be a community center with prayer space to give Muslims the opportunity to “give back to the community.” She said on television,

“There is a lot of ignorance about who Muslims are. And a center like this would be dedicated to removing that ignorance. And it will also counter the extremists because the moderate Muslims need a voice. Their voices need to be amplified.”

“I don’t think anybody wants to do anything to disrespect those families [of 9/1 victims]. They made the ultimate sacrifice. At the same time, we have to balance diversity and look for opportunities to bring different groups together.”

Many particularly cringe at having the mosque built two blocks from Ground Zero. Viviana Hernandez, a chaplain with better instincts than the community board, correctly assessed the problem, saying the 9/11 victims’ families “would be wounded by erecting a mega mosque so close to the place where their loved ones were massacred. Even though they may have altruistic reasons, the real terrorists will see it as a win on their side.” 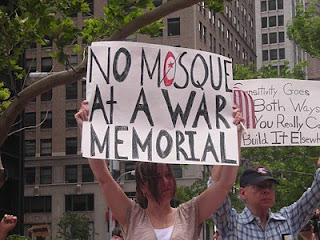 And that’s the material reason for not building the structure that would accommodate 2,000 Muslim worshipers and which supporters promote as a “vibrant and inclusive world-class community center.” Critics assert that, to radical jihadists, the mosque — located in the very heart of what Muslims call the “Great Satan” — would be a monument to the supremacy of Islam over decadent America. Regardless of what imams preach there, jihadists will give the messages a symbolic twist all their own.

A ready example of this fact is already on display near a Manhattan mosque whose imam preaches against terrorism. But outside the brothers of the “Revolution Muslim” spread another message. Reporting for CNN, Drew Griffin and Kathleen Johnston filed this report late last year:

Protected by the Constitution of the country they detest, radical Muslim converts like Yousef al-Khattab and Younes Abdullah Mohammed preach that the killing of U.S. troops overseas is justified. In their thinking, so were the September 11, 2001, attacks on the United States — and so are attacks on almost any American. “Americans will always be a target — and a legitimate target — until America changes its nature in the international arena,” Mohammed said.

Not Our War, but a War

Indeed It is regrettable we are involved in a conflict that Islamists promise will not cease until a global Islamic caliphate becomes a reality and Muslim Sharia law the universal instrument of justice. And though we commend moderate Muslims who would wish it otherwise, this is the reality we live with. Refraining from the use of terms like jihadists, radical Islam, Islamic terrorists, or the like does not change the equation. It’s war, and we are in it.

Five times each day the world over, Muslims hear the adhan (the Muslim call to prayer) ringing from their minarets. Excerpts declare,

We’ve heard Allahu Akbar emanate from the Fort Hood jihadist murderer in America, as well as from the lips of every suicide bomber who has detonated his or her lethal explosives belt while standing among innocent victims — be they Muslims, Christians, or Jews. Therefore, with all due respect, we need not hear it five times a day reverberating within earshot of Ground Zero.

It's Come to This - American Spectator

Moscow Has a Ground Zero Mosque Controversy Too - ABC News

It Is No Dream! Bible Prophecy: Fact or Fanaticism? - Elwood McQuaid (Book)