The United States has requested that Israeli Prime Minister Netanyahu extend the construction moratorium in Jerusalem and the area of Judea and Samaria, referred to as the West Bank, in order to keep the Palestinians from walking out of the peace talk negotiations as they have threatened to do.

Meanwhile, Catherine Ashton, the Chief of Foreign Policy for the European Union, while in Israel has told both the Israeli and the Palestinian leaders the peace process will fail if Israel continues to build in the Jewish settlements and Ashton has applied pressure on Israel to continue the moratorium on building. 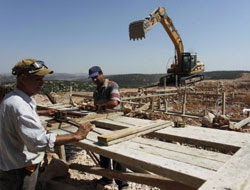 US and European pressure on Israel to stop building in Biblical lands - their promised land - is a precursor to the end of times scenario that can be found in Bible prophecy.

This scenario is exactly what Jesus said would happen in the last days. In His Olivet Discourse, as recorded in Luke 21:24, the Lord told the Jewish people that Jerusalem would be trodden down (controlled) by the Gentiles until He returned to the Earth. Daniel, an ancient Jewish prophet, wrote this same scenario in Daniel chapters 2 and 9 as he foretold that the Gentiles would have control of the Jewish people until Jesus Christ comes back to resolve this conflict. By the way, the United States and the European Union are Gentile world powers. John, who wrote the book of Revelation, reveals the plan of God to bring Gentile world powers to defeat (Revelation 6-19).

United States and European Union pressure on the Jewish state of Israel is indeed setting the stage for Bible prophecy to be fulfilled.

Daniel: On the Times of the Gentiles - BPT (David Reagan)

US, Euro diplomats strive to save Mideast talks - AFP