A superficially wide coalition of about 300 left and far-left groups, from the AFL-CIO to the Communist Party USA to the United Methodist lobby office, is sponsoring a rally in Washington, D.C. this Saturday to match and counter Glenn Beck’s successful event on the National Mall last month.

Called “One Nation Working Together” (ONWT), the rally will demand more-more-more government, while denouncing U.S. military power, pressing for open borders, and pushing the usual litany of liberationist social causes. They hope to attract 100,000 or more as an antidote to Tea Party populism.

“As people of faith, we deeply care about the issues of justice, education and jobs, and we feel those are issues facing society we have to address,” chimed the Rev. Amy Stapleton, of the United Methodist General Commission on Religion and Race, to the New York Times. “A march like this is something that hasn’t been accomplished since Dr. King brought people together in 1963 around issues of race, war, class and the right to decent pay and good jobs.”

Besides United Methodist liberal elites, ONWT also has sponsorship from the United Church of Christ, Michael Lerner’s Tikkun-Network of Spiritual Progressives and Jim Wallis’s Sojourners Evangelical Left group. But the real muscle will come from trade unions, most of them for government workers, who will bus in their usual placard waving activists.

“The Tea Party has been getting much more media attention than it deserves, and it’s been saying it represents the voice of middle-class America,” explained an official with a New York health care union local, who told the New York Times that his union has chartered 500 buses to carry 25,000 union members to the rally. “A lot of us feel we have to get a different voice out there speaking for working people, one respecting the diversity of this country, which the Tea Party does not.” 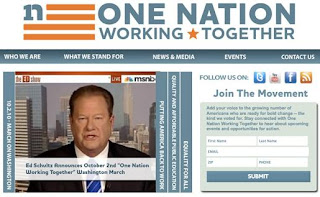 “And yet, we are the majority – fueled by hope, not hate,” insists the ONWT website. “We have the pride, power and determination to keep ourselves – and our country – moving up and out of the valley greed created.” Despite the far left groups that comprise the coalition, including the Communist Party USA, ONWT wants to pretend that it is mainstream. It also poses as the natural successor to Martin Luther King’s “I Have A Dream” rally at the Lincoln Memorial, in contrast to Glenn Beck’s rally there last month, which the Left saw as a usurpation of King’s imagery.

ONWT obviously has the November elections in mind, wanting to rally a leftist base against a Republican landslide while also warning Democrats not to further compromise their message in a bid for centrists. ‘On 11-2-10, we will march again – into the voting booths,” the ONWT website warns. “We will bring our families, our friends, and our neighbors. And once the ballots are counted, we will keep organizing, we will hold our leaders accountable, and we will keep making our dream real.” Howard Dean has produced a promotional video for ONWT. And perennial Hollywood leftist Danny Glover is chipping in with an ONWT West Coast pep rally.

Another sponsor of ONWT is the U.S. Peace Council, an affiliate with the World Peace Council, an old Soviet front group founded in the early Cold War to promote Soviet strategic objectives under the banner of “peace.” Amazingly, the Helsinki-based World Peace Council and some of its affiliates survived the Soviet Union’s collapse and the end to KGB funding. Now highly diminished, its U.S. affiliate remains “a multi-racial, pro-working class, anti-imperialist organization committed to peace, economic and social justice, and to international solidarity with the peoples of the world.”

Years ago, serious coalitions of the Left, especially when involving trade unions like the AFL-CIO, worked hard to distinguish themselves from Soviet fronts and other extremist and anti-democratic groups. ONWT, professing to represent the “majority” of Americans, seems indifferent to the company it keeps. The continuing interweaving of some Muslim groups into leftist coalitions like ONWT, despite the involvement of sexual liberationists whose behaviors would earn death sentences under Sharia, is also remarkable.

The common banner that bonds the ONWT coalition seems to be hostility to a strong America and identification with victim mythology. However many show up for ONWT’s October 2 rally, they likely will not effectively counter the Tea Party movement. Instead, ONWT’s bizarre and extremist causes will serve as a useful foil for conservative activists.

Liberals to March for Jobs, Justice in ‘One Nation Working Together’ Rally in DC - CNS News

What is 'progressive' about defending communists and terrorists? - World Tribune