What’ll They Offer Next?

It’s a bit like a transparent – cheap – mafia movie.

First there’s the threat. “You’d better do what we tell you, punk, or else…”

Then when, to their exasperation, the warning doesn’t work, they switch tactics.

Desperate for the good guy to comply with their demands, they’ll offer most anything to buy him off.

They’ll start slow, with inducements increasingly difficult to turn down.

But the really juicy carrots they’ll keep for last. By the time they offer those, the pressure on the good guy to take the bribe will be so intense – from both his enemies and his friends – it’ll be almost impossible to resist.

He’ll buckle, to his personal ruin, and the enduring detriment of those around him.

As for the cartel, it will have secured both its goal, and its revenge.

The cards it’ll let lie where they fall.

For decades the United States – that is to say, the administrations operating out of Washington DC – has been levering first threats, then promises, to drive successive Israeli prime ministers into playing ball with their peace game.

Intensely, since he entered the White House, the current occupant has been practicing this good cop bad cop technique on Benjamin Netanyahu.

First, upon receiving the presidency, Barack Obama stretched out his hand pledging – apparently from the heart – his best effort to ensure peace and security for Israel, and independence and dignity for the “Palestinians.”

Then the leader of the free world went to Cairo, where he bowed before the Muslim world, messaging Israel of his intention to move America closer to the Arab camp, and away from the Jewish one.

In the ensuing months, Obama used Hillary, his right-hand woman – to squeeze Israel into agreeing to a “settlement freeze” in Samaria and Judea. They tried applying that to construction in Jerusalem as well – with less success.

Still, when the American judged the time ripe to tie his personal political prestige to the process, he launched the 2010 Peace Talks – inviting Netanyahu, the PLO’s Mahmoud Abbas, Jordan’s King Abdallah and Egypt’s Hosni Mubarak to the White House. 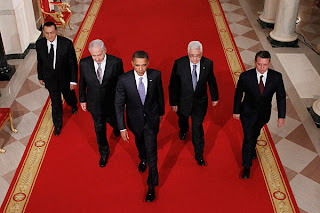 As the five men strode down the corridor to the waiting press corps, the implication for the watchers, and especially Israelis, was clear.

Netanyahu represented one side. Mubarak, Abdallah, Abbas and Barack Hussein Obama the other.

Knuckle under – Israel heard – you’re on your own.

Apparently Obama believed that he would be able to impel these discussions by applying personal and coordinated US-EU-UN-Quartet pressure on Netanyahu to extend the building moratorium; to ensure that the PLO not jump ship again.

This didn’t work in the run-up to September 26 – the deadline on which the freeze was set to expire. Bolstered by members of his government, Jewish groups in Judea and Samaria, ordinary Israelis and Christians in Israel as well as worldwide, Netanyahu stayed strong.

But the nations won’t let this go. No sooner had the freeze been allowed to thaw than they swung back into action.

The United Nations said it was “disappointed” with Netanyahu, and secretary-general Ban Ki Moon “reminded” Israel that settlement building was “illegal” under international law.

The headlines in the Hebrew press Thursday – a Sabbath day on which the Jewish people conclude the Feast of Tabernacles and celebrate Simchat Torah – were that Obama has made “a personal appeal” to Netanyahu to re-impose the freeze for two months.

It would be a demonstration of damnable poor faith for the prime minister to rebuff the plea.

To sweeten that pill and up the pressure, Obama offered the following goodies:

These offers were devilishly designed to nudge a hesitant or wavering Netanyahu over the line. He can spread them out before those coalition members opposed to any concessions and “justify” his decision to, after all, comply.

The “quality” of the American promises now on the table should heighten Netanyahu’s state of alert.

Obama looks increasingly desperate to help Israel and the PLO seal a deal. If these bribes don’t produce results, he may dangle those truly juicy ones.

Jonathan Pollard should brace himself; he may be confronted with an unimaginably difficult choice really soon.

For what should the poor man do if, after years of imprisonment for spying for Israel, he is offered his freedom in exchange for guarantees from Bibi to immediately make possible the creation of a Palestinian state?

Dear Prime Minister: U.S. Efforts to Keep the Peace Process on Track - The Washington Institute for Near East Policy