The nation’s leading security experts warn homegrown Islamic terrorism is becoming a serious problem. And it will likely get worse because our politically correct (PC) leaders refuse to address the root cause — fundamentalist Islam — and virtually no Muslim leaders are willing to demonize the teachings that fuel Islamic terrorism.

The Senate Homeland Security Committee heard last week from those charged with America’s domestic security. FBI Director Robert Mueller III testified, “The threat from radicalization has evolved” from homegrown Islamic extremists during the past year and they are “increasingly more savvy, harder to detect, and able to connect with other extremists overseas.” 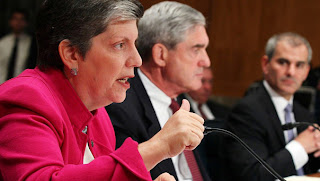 Department of Homeland Security Secretary Janet Napolitano testified the homegrown terrorist threat increased over the past year because of cooperation with groups like al Qaeda by “sharing financial resources, training, tactical and operational expertise.”

Unfortunately, these officials only offer defensive solutions while avoiding Islamic terrorism’s root cause. That’s because our government is operating on the false premise that Islam is only a religion and that terrorism is caused by legitimate complaints — such as social injustice — and not an Islamic imperative.

For the sake of our security, our leaders must acknowledge Islamic terrorism is rooted in their religion. That doesn’t mean all Muslims endorse terrorism but to ignore the association is naively PC.

Our officials cited evidence of surging domestic Islamic terrorism. “The range of al-Qaeda core, affiliated, allied, and inspired U.S. citizens and residents plotting against the homeland during the past year suggests the threat against the West has become more complex and underscores the challenges of identifying and countering a more diverse array of homeland plotting,” testified Michael Leiter, director of the National Counterterrorism Center (NCTC).

FBI Director Mueller testified to recent examples of domestic Islamic terrorism. The FBI disrupted the al Qaeda plot to attack the New York subway system and, in May, an attempt to detonate a car bomb in Times Square, Mueller said. There were homegrown “lone-wolf” extremist attacks on soldiers at Fort Hood last November and the Arkansas recruitment station over a year ago. There were attempted bombings of an office tower in Dallas and a federal building in Springfield, Ill.

Secretary Napolitano testified to evidence of al Qaeda’s growing homeland influence. She said “over the past 12 months, efforts by violent [Islamic] extremist groups and movements to communicate with and recruit individuals within the United States have intensified.” Some Americans, Napolitano said, are inspired by the global jihadist movement to commit violent acts in the U.S. and use the Internet to connect with extremists.

Internet relationships have led to recruiting and overseas terrorist training. NCTC director Leiter testified, “at least 20 U.S. persons — the majority of whom are ethnic Somalis — have traveled to Somalia since 2006 to fight and train with al-Shabaab,” a U.S.-designated terrorist organization.

Unfortunately our government has no agency charged with identifying radicalization or preventing terrorism recruitment. Rather, the federal government’s anti-Islamist terrorism efforts focus almost exclusively on defensive systems such as hardening our transportation systems.

Even though our transportation systems were strengthened after 9/11 there are still flaws. The attempted terrorist attack on Northwest Flight 253, bound to Detroit, last Christmas, illustrates aviation’s continued vulnerability.

The FBI developed an extensive outreach program to Muslim communities to develop trust, address concerns, and dispel myths. It established the Specialized Community Outreach Team to work with communities such as those in Minneapolis, where U.S. persons are recruited to travel overseas to fight with the al-Shabaab. There are also numerous information sharing programs across government agencies with links to local law enforcement.

These defensive programs must continue but they will never defeat homegrown Islamic terrorism alone. Rather, fundamentalist Islam’s toxic influence must be addressed but politics are in the way. Some PC leaders like President Obama, who exorcised Islamic references from our security strategies, want us to believe that defeating Islamic terrorism depends on addressing grievances like the Israeli-Palestinian conflict and Muslim poverty. And those who correctly blame terrorism on Islamic religious and cultural traits are labeled Islamophobic.

Islamic fundamentalists want modern Muslim societies to return to traditional Islam which makes no distinction between the political and the religious. “Islam is the solution” to all problems, explains Mr. Bar, and “no area of human activity is outside its remit.”

That is why one must understand the religious-ideological factors which are deeply embedded in Islam in order to formulate an effective strategy for fighting Islamic terrorism, Mr. Bar argues.

But this view creates a dilemma for Westerners who believe there are pragmatic causes of Islamic terrorism rather than an ideological basis, says Mr. Bar. That puts Westerners at a disadvantage because the only effective counter to Islamic terrorism requires a religious-ideological solution which is precluded by Western concepts of civil rights and government non-intervention in matters of organized religion.

What can be done?

The U.S. must seek religious reform in the Muslim world. Mr. Bar suggests Islamic authorities must intervene to contradict their radical worldview — such as there is no state of jihad between Islam and the West and terrorism has no justification — and they must “excommunicate” the radicals. But at present the West is unprepared to deal with Islamic imams who incite followers with fiery sermons and fatwas — Islamic rulings — justifying terrorism.

This strategy, Mr. Bar argues, cannot take shape without a “reinterpretation of Western concepts of the boundaries of the freedoms of religion and speech, definitions of religious incitement, and criminal culpability of religious leaders for the acts of their flock as a result of their spiritual influence.”

The solution is to make a paradigm shift and understand that Islam is not a Western-style religion that deserves protection and noninterference from the state.

Fundamentalist Islam is a theocracy which means it is a dominant government philosophy and mandate, a cultural imperative designed to control all aspects of life and an oppressive judicial system designed to establish and enforce certain religious beliefs. Finally, Islam is a national strategy that openly states that it is the only acceptable form of government for the world and that tactics including murder of unbelievers is mandated in order to achieve it.

Once free from the false view of Islam as solely a religion, our leadership will be able to move from the defensive to an offensive mindset and fight for the safety and security of America and the West. Our present PC mindset regarding Islam and terrorism dooms us to reaction and ultimate failure.