By Chris Perver
Prophecy in the News

The European Union has formally asked for its observer status at the United Nations General Assembly to be upgraded to that enjoyed by member-states, following the ratification of the Lisbon Treaty late last year. The EU has submitted a resolution requesting permission for European Council President Herman Van Rompuy and High Representative for Foreign Affairs Catherine Ashton to be able to address the UN General Assembly on a ministerial level, a privilege normally reserved for heads of government of member nations. On Tuesday the resolution was put to a vote, but other regional groupings with observer status objected to the demand, resulting in the matter being deferred to the 65th session of the General Assembly. Although the motion has been deferred, the EU is continuing to press for its status at the UN to be enhanced, and officials expect a compromise could be reached some time next year.

"A UN General Assembly resolution that sought to allow European Council President Herman Van Rompuy to address the UN chamber - no differently from US President Barack Obama or Iranian leader Mahmoud Ahmadinejad - was narrowly defeated after a majority of nations voted to delay debate on the matter. The resolution would also have awarded the EU, which currently only carries observer status at the UN, the right to make proposals and submit amendments, the right of reply, the right to raise points of order and the right to circulate documents. There would also be additional seats put in the chamber for the EU's foreign policy chief, High Representative Catherine Ashton and her officials".

While EU members such as Britain and France enjoy permanent seats on the Security Council, formerly being a regional organization, the EU has only had observer status with the United Nations. EU ministers have in the past proposed that it be allowed to represent these states on the Security Council as and when there is a European consensus on any given issue. Up until now that hasn't happened, but the redrafted EU Constitution does make provision for it. 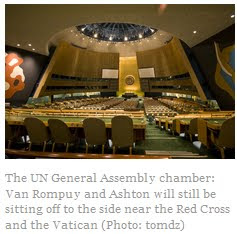 As the Lisbon Treaty states, "When the Union has defined a position on a subject which is on the United Nations Security Council agenda, those member states which sit on the Security Council shall request that the Union Minister for Foreign Affairs be asked to present the Union's position". And not only has the EU obtained the legal authority to speak on behalf of Britain and France at the United Nations, albeit with their prior consent, the EU now has the power to represent itself at the General Assembly. The ratification of the Lisbon Treaty in November 2009 has for the first time given the union its own legal identity on the world stage. Along with a permanent president, foreign minister and external action service representing the union overseas, the EU now has the ability to make or break its own agreements with international organizations, such as the United Nations in this case. Article 188p of the Lisbon Treaty states, "1) The Union shall establish all appropriate forms of cooperation with the organs of the United Nations and its specialised agencies, the Council of Europe, the Organisation for Security and Cooperation in Europe and the Organisation for Economic Cooperation and Development. The Union shall also maintain such relations as are appropriate with other international organisations. 2) The High Representative of the Union for Foreign Affairs and Security Policy and the Commission shall be instructed to implement this Article. And it seems EU ministers are now attempting to make good on that promise.

As the European Union seeks to acquire ever-greater and more centralized powers on the world stage, so I believe the way is being prepared for the appearance of a man to head it all. As Dr. Paul-Henri Spaak, the first president of the UN General Assembly, once said, "We do not want another committee, we have too many already. What we want is a man of sufficient stature to hold the allegiance of all people, and to lift us out of the economic morass into which we are sinking. Send us such a man, and be he God or devil, we will receive him". The Lord prophesied that such a man will come, and he will be warmly received (John 5:43). The book of Revelation says of this man, who will control this final world empire of history, that he will be installed by Satan himself. "The dragon gave him his power, and his seat, and great authority", Revelation 13:2. During the temptation of Christ, Satan offered to give all the kingdoms of the world to the Lord if He would but bow down and worship him. And Satan added, "for that is delivered unto me; and to whomsoever I will I give it", Luke 4:6. Satan has acquired this authority on earth. It is not his by right, but it is his by forfeit. For Adam forfeited his right to dominion over Creation after the fall, and now Satan has usurped it. While Christ rightly refused Satan's offer, there is a man coming who will accept it. The Bible calls him the Antichrist. And for a short time he will be given the authority to rule over this earth. "And there was given unto him a mouth speaking great things and blasphemies; and power was given unto him to continue forty and two months", Revelation 13:5. But his reign will come to an end. For the day is coming when He will come whose right it is (Ezekiel 21:26-27), and in that day all earthly authority will be given unto Him. Praise God that Jesus Christ is coming back, and that He will reign in righteousness (Isaiah 32:1), and of the increase of His government and of peace there shall be no end (Isaiah 9:6-7). There is no hope for you in this present world system. But like the writer of Hebrews, we can say, "here have we no continuing city, but we seek one to come", Hebrews 13:14. Can you also say that? Have your sins been forgiven? Have you put your trust in the King of Kings for salvation? Turn away from your sins. Believe on the Lord Jesus Christ and you shall be saved (Acts 16:31).

Israel could join the EU's existing list of privileged or "strategic" partners - EUobserver.com