The Day the Grid Stands Still

NASA continues to warn of the potential for a sudden solar flare emanating an Electro Magnetic Pulse (EMP) in the earth’s direction at some point during the coming solar maximum, scheduled to peak in 2012.

A team led by Mausumi Dikpati of the National Center for Atmospheric Research (NCAR) predicts the current solar maximum to be the most intense in at least fifty years and possibly as intense as the 1859 Carrington Event.

As we discussed in June, the impact of a solar storm upon the earth is measured in nano-Teslas or nT. The solar storm that knocked out the Quebec power grid in 1989 measured 589 Nt’s. The 1859 Carrington Event measured 1,760 nT’s.

The scientists at NCAR say they have confidence in the forecast because, in a series of test runs, the newly developed model simulated the strength of the past eight solar cycles with more than 98% accuracy.

The forecasts are generated, in part, by tracking the subsurface movements of the sunspot remnants of the previous two solar cycles.

The NCAR team's computer model, known as the Predictive Flux-transport Dynamo Model, draws on research by NCAR scientists indicating that the evolution of sunspots is caused by a current of plasma, or electrified gas, that circulates between the Sun's equator and its poles over a period of 17 to 22 years.

Think of it like the Gulf Stream currents that regulate the weather on either side of the Atlantic.

I used to go out with a buddy who had a charter fishing boat to fish the blue water of the Gulf Stream. It runs about fifty miles offshore from Cape Lookout, NC.

You can see it before you get there . . . it is a ribbon of deep, Caribbean blue cutting through the sea-green mid Atlantic. In mid-winter when the temperatures on shore are in the thirties and forties, you’re still fishing the Blue Water in temperatures in the 70’s.

According to the current flow, NCAR predicts that Cycle 24 will peak in 2012 with a massive coronal mass ejection that will blast the planet with a massive EMP pulse.

The US Army calculated that it would take an EMP blast level of between 30-80 kV/m to fry the circuits in a vehicle. But in tests using a 2010 Toyota Prius, they began at a minimum level of 5 kV/m. They didn’t need to raise the EMP level any further.

And if they want to raise it any higher, they’re gonna need another Prius.. .

According to various official astrophysics and solar research labs around the world, something very, very strange is going on in our solar system. A partial list includes the following:

I was fascinated to learn the name of the Large Binocular Telescope Near-infrared Utility with Camera and Integral Field Unit for Extragalactic Research located on Mt Graham in Southeast Arizona that's keeping an eye on all this.

What was fascinating to me was not its ponderous and unwieldy name, but the acronym derived from the letters in boldface. They call it Lucifer. Coincidence?

What would happen in the case of another Carrington Event is all speculative since the planet hasn’t been hit full on since becoming wired. But most probably, the side that took the full force of the hit would be instantly plunged into the 19th century. 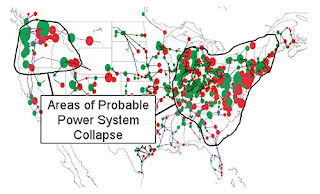 The rule of thumb would be that if it has wires, it’s broken. The Grid would be cooked. Most cars would stop dead in their tracks. Cellphones and satellites would fry. Forget about computers and the internet.

There would be no food delivery system, no way to deliver clean water, no banks, no ATMs and no money. Cities would become war zones. If you live in a city, your best bet would be to try to get out. But that will be no easy trick without transportation.

There is probably no good way to prepare for something like this, but we have several weeks worth of food on hand, together with some cash and other barter materials. (Just in case we’re still here and the Rapture hasn’t happened yet.)

But I’m not so sure we will be. Among the signs Jesus outlined as harbingers of His return was the following:

"And there shall be signs in the sun, and in the moon, and in the stars; and upon the earth distress of nations, with perplexity; the sea and the waves roaring; Men's hearts failing them for fear, and for looking after those things which are coming on the earth: for the powers of heaven shall be shaken." (Luke 21:25)

Compare that verse to conditions as they have been, say, since you were born. In just my lifetime, sunshine has gone from being the healthiest thing on the planet to one of the most deadly and toxic.

Now, it threatens to wipe out life on earth, at least as we know it.

The more we learn about outer space, there more there is to fear. Asteroid strikes, solar storms, even warnings about killer gamma rays are part of our daily news cycle.

Add to that the fear associated with climate change, the celestial alignments due over the next few years (in 2014-15 there will be four “blood” moons) and the global drive to clean up the environment at any price and you find that you pretty much have in Luke 21:25 a summary of this week’s Space News.

The powers of heaven are indeed being shaken, right before our very eyes. This ‘shaking’ will continue in both frequency and intensity until the 2nd Coming when the Lord returns in power and great glory.

But Jesus said that once it begins, it will continue through to the end. To those living at that time, He said this:

“And when these things begin to come to pass, then look up, and lift up your heads; for your redemption draweth nigh.” (Luke 21:28)

What does that mean? The signs in the sun, moon and stars, and the distress of nations, with perplexity have already long since begun to come to pass. The Lord warns us to “look up and lift up our heads” once these things begin, because our redemption draws near.

What can that mean? I was redeemed at the Cross. But my redemption isn’t complete until the Promise becomes reality and I am in His Presence. Why lift up my head? Because,

“. . . the Lord Himself shall descend from heaven with a shout, with the voice of the archangel, and with the trump of God: and the dead in Christ shall rise first: Then we which are alive and remain shall be caught up together with them in the clouds, to meet the Lord in the air: and so shall we ever be with the Lord.” (1st Thessalonians 4:16-17)

“So likewise ye, when ye see these things come to pass, know ye that the kingdom of God is nigh at hand. Verily I say unto you, This generation shall not pass away, till all be fulfilled.” (Luke 21:31-32)

Top Physicist Says Solar Flare Would Set Us Back 100 Years