The progressive world was shocked by the throngs of people who gathered at the Lincoln Memorial on Aug. 28 in response to Glenn Beck's call to attend his "Restoring Honor" rally. Crowd estimates ranged from 87,000 to more than 500,000, which liberal media talking heads discounted as little more than the number of tourists in Washington on any given day.

Across town, Rev. Al Sharpton complained about Beck's attempt to hijack Martin Luther King's dream – to a few hundred of his faithful followers.

Within hours of Beck's event, the progressive world announced its bigger and better demonstration to be held at the Lincoln Memorial on Oct. 2, one month before Election Day. Their event is called "One World Working Together." More than 150 organizations are promoting this event. Even a casual review of the mission statement of these groups, and the "what we stand for" statements, reveal that these organizations are the people who are promoting a socialist agenda in this country.

Rarely has there been an opportunity to see so vividly the political and philosophical division in this nation. 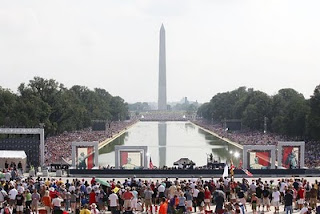 Glenn Beck's rally called for a return to God and the principles of freedom set forth in the Constitution.

The "One Nation" rally, according to their website, will call for government to adopt a socialist agenda to control the work force, to control education and to achieve social equality.

Compare what the "One Nation" organizations advocate with the Socialist Party USA platform.

Socialists in America have made great gains in recent years because they are far better organized than are non-socialists. Socialists have re-labeled themselves as "progressives," rather than the socialists they are. Americans are discovering that even though it may be politically correct to call a skunk a mustelidae, when it begins to spew, there is no question about what it really is. There can be no question that the groups aligned with "One Nation" are working to implement a socialist agenda.

It is interesting, and perhaps instructive, to know that the One Nation Working Together website was registered by PowerPac.org on June 23, 2010. PowerPac.org was formed in 2004 as a not-for-profit corporation (501(c)(4)), located at 44 Montgomery St., San Francisco, headed by Steve Phillips, chairman, and Andrew Wong, executive director. Their revenue for 2008 was $8.5 million.

The PowerPac Foundation was formed in 2007 by Steve Phillips, president, and Andrew Wong, as a 501(c)(3) tax-deductible not-for-profit organization, located at 44 Montgomery St., San Francisco. Their revenue in 2008 was a little more than $2 million.

The "One Nation Working Together" event is a project of the Tides Center, a 501(c)(3) not-for-profit organization with 2008 revenues of $97 million. The Tides Center is headed by Drummond Pike, whose compensation is $275,000. Pike is also a Director and CEO of the Tides Foundation, whose 2008 revenue was $114.4 million.

Now examine the organizations that supported the Glenn Beck event: The tea parties are so new and disorganized that no IRS 990 tax returns are available yet. Most of the tea party and 9/12 groups are not incorporated; they are truly grassroots organizations funded out of the pockets of participants. One group promoting the "Restore Our Constitution" event in Washington on the 9-11 weekend is fairly typical. The group reserves a bus, charges riders an amount sufficient to cover the costs, and the people who can afford the fare and the time go. There are no big organizations chartering buses for their membership.

The purpose of the demonstration on Oct. 2 is to convince America, and the world, that there are more people in American who prefer a socialist agenda than there are people who prefer the principles of freedom set forth in the U.S. Constitution.

The socialists' Oct. 2 rally is calling for an even more radical transformation of America; the Nov. 2 rally at election booths across the nation will echo Beck's call to restore honor to America by returning to God and to the principles of freedom enshrined in the U. S. Constitution.

Author Robert Ringer: US 'Decaying From Within' - NewsMax.com