On September 12, 1960, Sen. John F. Kennedy, the Democratic Party’s candidate for President of the United States, went to Texas and addressed the Greater Houston Ministerial Alliance. The background to Kennedy’s speech was ardent opposition to his Catholicism and accusations that, if elected, he would be controlled by Catholic authorities. Against the advice of many of his own senior staff, Kennedy decided to face the issue head-on, and to do so in a context that was anything but friendly. 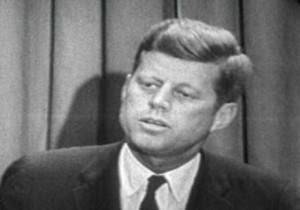 Kennedy’s speech is one of the most memorable of his political career, and it may have been essential to his narrow victory over Vice President Richard M. Nixon just a few weeks later. And yet, what strikes us now is that this speech actually set the stage for a very unfortunate turn in national politics.

In essence, Senator Kennedy argued that his Roman Catholic faith would not be a consequential matter in his political life. He stated:

But because I am a Catholic, and no Catholic has ever been elected President, the real issues in this campaign have been obscured — perhaps deliberately, in some quarters less responsible than this. So it is apparently necessary for me to state once again — not what kind of church I believe in, for that should be important only to me — but what kind of America I believe in.

Note his assertion that his religious convictions “should be important only to me,” and thus of no public consequence. In the most famous line of the speech, he said:

“I am the Democratic Party’s candidate for President who happens also to be a Catholic.”

In his book, The Ordeal of Civility, John Murray Cuddihy points to that language of “happens to be” as the language of avoiding or denying significance to beliefs.

Looking back, the Houston speech was probably a political necessity for Kennedy. A careful reading of the text will reveal much to admire, as well as many areas of concern. But, in the end, the significance of this speech lies in its role as the paradigm for so many that would follow, in which politicians and public figures would insist that their religious convictions and beliefs have no public consequence.

We must expect more than that. What we need is for politicians and candidates to tell us what they believe, and how this will be translated into a governing philosophy and moral/political decision making. “Happens to be” is just not enough.