A Gavel Falls on Marriage: The Proposition 8 Decision

The importance of the decision handed down yesterday by U. S. District Judge Vaughn R. Walker in California’s Proposition 8 trial will be difficult to exaggerate. Proponents of same-sex marriage immediately declared a major victory — and for good reason. The editorial board of The New York Times declared the verdict “an instant landmark in American legal history,” and so it is, even if later reversed upon appeal. 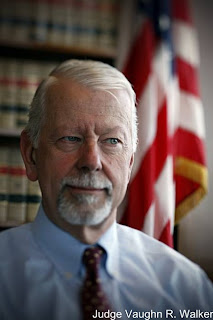 Judge Walker’s decision is sweeping and comprehensive, basically affirming every argument and claim put forth by those demanding that California’s Proposition 8 be declared unconstitutional. That proposition, affirmed by a clear majority of California voters, amended the state’s constitution to define marriage as the union of a man and a woman. In one brazen act of judicial energy, California’s voters were told that they had no right to define marriage, and thousands of years of human wisdom were discarded as irrational.

Even as the case is immediately appealed, the reality is that a Federal court has now declared that same-sex couples have a constitutional right to marry. Pressing beyond this verdict, Judge Walker also released a set of “findings” that include some of the most radical statements about marriage yet encountered.

In rendering his verdict, Judge Walker declared that California’s Proposition 8 violates both the equal protection and due process rights of homosexual citizens. The proposition, he concluded, “fails to advance any rational basis in singling out gay men and lesbians for denial of a marriage license.” He continued:

“Indeed, the evidence shows Proposition 8 does nothing more than enshrine in the California constitution the notion that opposite-sex couples are superior to same-sex couples.”

In order to reach this conclusion, Judge Walker provided more than 100 pages of legal reasoning, based on the evidence that he allowed or accepted. On page after page, Judge Walker arbitrarily accepted the claims put forth by proponents of same-sex marriage as rational, and declares the evidence and arguments put forth by the defenders of Proposition 8 as lacking in any rational basis.

The decision handed down Wednesday in San Francisco comes with virtually no surprise. Judge Walker’s statements and rulings in the course of the trial proceedings pointed directly to the decision released yesterday.

This decision, whatever its final resolution, serves as an undeniable reminder of the power of Federal judges. A single unelected judge nullified the will of the voters of California as expressed through the electoral process. Those who have been arguing that judicial activism is a fiction will have to look this decision in the face. The New York Times celebrated Judge Walker’s usurpation of the political process, arguing that “there are times when legal opinions help lead public opinions.” The paper and the proponents of same-sex marriage clearly hope that this is one of those times.

That is clearly the most significant dimension of the verdict. Judge Walker’s decision, bearing the full force of a Federal court, adds to the sense of inevitability that the proponents of same-sex marriage have been so carefully constructing in recent years. Defenders of marriage as a heterosexual institution should resist the temptation to minimize the significance of this decision, even as the verdict is vigorously appealed. Yesterday’s ruling is a huge win for the homosexual community, and a significant step toward the full normalization of homosexuality within the culture.

Anyone who reads Judge Walker’s decision will see that the normalization of homosexuality was one of his major concerns. Any belief that heterosexual relations are morally superior to homosexual relations “is not a proper basis on which to legislate,” he asserted. Proposition 8, he insisted, “was premised on the belief that same-sex couples simply are not as good as opposite-sex couples.” The judge claimed to have “uncloaked” the real reason California’s voters adopted Proposition 8 — “a desire to advance the belief that opposite-sex couples are morally superior to same-sex couples.”

The judge released enumerated “findings” within his decision. Among the most important — and startling — of these are the following: In a breathtaking and brief sentence, Judge Walker asserted:

“Gender no longer forms an essential part of marriage; marriage under law is a union of equals.”

Until this verdict, such language had never appeared in a decision of a Federal court. If gender is no longer “an essential part of marriage,” then marriage has been essentially redefined right before our eyes.

The religious liberty dimensions of the decision are momentous and deeply troubling. While Judge Walker declared that the religious freedoms of citizens and religious bodies were not violated because no such body is required to recognize or perform same-sex marriage, the very structure of his argument condemned religious and theological objections to homosexuality and same-sex marriage as both harmful and irrational.

Beyond this, Judge Walker claimed to read the minds of California’s voters, arguing that the majority voted for Proposition 8 based on religious opposition to homosexuality, which he then rejected as an illegitimate state interest. In essence, this establishes secularism as the only acceptable basis for moral judgment on the part of voters. The judge’s statements condemning religious opposition to homosexuality speak for themselves in terms of animus.

Judge Walker’s decision will be appealed to the Court of Appeals for the Ninth Circuit, also located in San Francisco — the most notoriously liberal appeals court in the nation. Inevitably, the case will be then appealed to the U.S. Supreme Court. The decision handed down by Judge Walker, especially as expressed in his findings, was clearly constructed with such appeals in mind.

Thousands of cases make their way through the Federal courts each year. Some are important, but only a few have lasting legal significance. Whatever happens on appeal, the decision handed down yesterday by Judge Vaughn R. Walker will reverberate for decades to come. Yesterday, a very important gavel fell on marriage. The central institution of human civilization suffered a direct hit, and its future hangs in the balance.