Thousands of Jews Gather at Temple Mount to Declare Allegiance

Thousands of Jews gathered recently at the gates to the Temple Mount in Jerusalem to declare their allegiance to this holy site and to declare the city of Jerusalem is the united, undivided, eternal capital of the Jewish people.

Speakers at the rally march said that discrimination has severely restricted the ability of Jews to ascend to the Temple Mount while at the same time Muslim rules forbid Jews from praying on this site which is Judaism's most holy site. 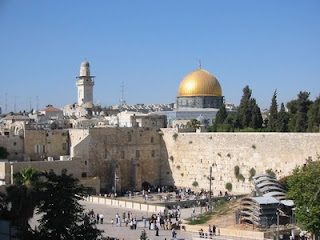 Thousands of Jews marching around the Temple Mount to say that this sacred piece of real estate is Jewish is an event that speaks to the past and to the future that is according to Bible prophecy.

The Temple Mount in Jerusalem, the location of the gold domed building, the Dome of the Rock that is seen on the Jerusalem skyline, is the same as the spot that Abraham took his son Isaac to offer as a sacrifice. This place is Mount Moriah where King Solomon built the first Jewish Temple 3000 years ago, II Chronicles 3:1. The Temple Mount, as it is known today, is also where the Jews returning from the Babylonian captivity rebuilt the Temple, Ezra 1-6.

By the way, that same Jewish prophet Zechariah also predicted that the Lord was jealous for Jerusalem, aggressively possessive for the city that He chose to dwell among His people forever and He is sore displeased about the heathen control of this sacred spot and He also said that one day He will come back to Jerusalem and to the Temple Mount there to build His Temple that will be on that spot forever, Zechariah 1:14-16 and this is Bible prophecy that will be fulfilled.

Is Temple Mount in our hands? - Ynetnews