Shi’ite Muslims in Detroit were in mourning last week for the Ayatollah Sayyed Mohammed Hussein Fadlallah, a world-renowned Lebanese cleric who died on July 4.

That ought to give law enforcement and government officials pause, since Fadlallah was a bloodthirsty jihadist cleric who hated America and Israel, and approved of the 1983 Hezbollah attacks on a U.S. Marine barracks and the American Embassy in Beirut that killed over 300. 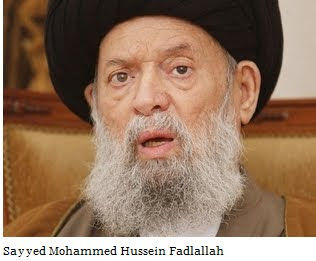 If what the mainstream media constantly tells us about Islam and Muslims is true, wouldn’t thousands of Muslims in Detroit be denouncing Fadlallah, rather than mourning him? It is constantly demanded of us, on pain of charges of “Islamophobia” and bigotry, that we assume without examination that most Muslims in the U.S. — all but a few “wackos,” such as are found in “any religious group” — are loyal citizens who love constitutional liberties, abhor jihad terrorism, and have no intention of bringing Islamic law here, at any time or in any way, in whole or in part, now or in the future.

So why do so many Detroit-area Muslims love Fadlallah? Shouldn’t patriotic, pluralistic American Muslims oppose such a man, and not engage in such a public display of mourning, simply as a matter of principle? It certainly seems so from Fadlallah’s public record.

Imam Mohammed Elahi of the Islamic House of Wisdom in Dearborn Heights last week called Fadlallah a “man of peace, man of justice ... a man of antiterrorism and antiviolence.” There are some very compelling indications, however, that Elahi’s characterization of Fadlallah was about as accurate as calling Barack Obama an advocate of the free market.

In the words of one the ayatollah’s most notorious admirers, former CNN Mideast editor Octavia Nasr (who lost her job after she lauded Fadlallah on Twitter after he died), Fadlallah “hated with a vengeance the United States government and Israel,” “regularly praised the terror attacks that killed Israeli citizens,” was a Holocaust denier, and was “designated a terrorist by the U.S. Treasury Department.”

None of that seemed to impress the mourners in Detroit. One Detroit Free Press story noted that area Muslim leaders disputed the accuracy of some of these claims about Fadlallah, but they didn’t explain how the false information gained so much currency as to hoodwink the Treasury Department and so many others.

In August 2006, Fadlallah encouraged Hezbollah jihadists who were fighting against Israel:

“You are moving ... to reach a new victory for the nation and to defeat the American and Zionist political pride and all the enemies of freedom in the region and the world. You are the soldiers of the Arab and Islamic nation and your struggle will bring victory to Arabs, Muslims and the oppressed.”

He characterized their fight as a “new battle of Khaibar.”

As I explain in my book The Truth About Muhammad, Khaibar was less a battle than a massacre: Muhammad, the prophet of Islam, suddenly appeared at the Arabian oasis of Khaibar, which was inhabited by Jews, and he and his men began killing in earnest. Thus when modern-day jihadists invoke Khaibar, they are recalling an aggressive, surprise raid by Muhammad, which resulted in the final eradication of the once considerable Jewish presence in Arabia. To the jihadists, Khaybar means the destruction of the Jews and the seizure of their property by the Muslims.

Not surprisingly, Hezbollah’s chief Hassan Nasrallah eulogized Fadlallah as a “merciful father.” Also not surprisingly, Fadlallah was a dear friend of Iran’s Ayatollah Khomeini, the architect of the Iranian revolution. Yet thousands of Muslims in the Detroit area turned out to pay final respects to this man.

Could it be that we’ve been sold a bill of goods about what Muslims in the U.S. really think, and need to examine that subject much more closely?

Could the knee-jerk assumption on the part of government, media and law enforcement that all Muslims in America are “moderates” who abhor jihad terrorism and work against it, be false. And could it be leading us to expose ourselves to unnecessary vulnerability? A great deal could be riding on the answer to that question.