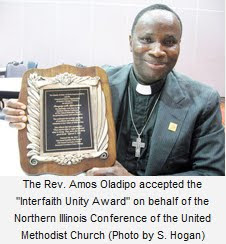 “At the national level, the Islamic Society of North America has found a close ally in The United Methodist Church,” ISNA’s program cooed, “both working together in campaigning for social justice, peace and equity.” No doubt. Apparently ISNA did not specifically cite the Chicago-area United Methodist stance against Israel. But presumably this policy only enhanced ISNA’s commendation for United Methodism’s “remarkable” solidarity.

Of course, no direct mention was made during the award ceremony of ISNA’s having been named in 2007 as an unindicted conspirator in the Holy Land terrorist financing case. According to the Dallas Morning News, court documents showed that the Islamic Society of North America was “an integral part of the [Muslim] Brotherhood’s efforts to wage jihad against America through non-violent means.” But National Council of Churches chief Michael Kinnamon was present for the Chicago Interfaith Unity Award. And ISNA’s website advertises Kinnamon’s own effusive defense of ISNA from last year.

As an ally and friend of the Islamic Society of North America (ISNA), I lament that the United States of America has neglected to consult with ISNA leadership before publicly designating the organization as an ‘unindicted co-conspirator’ in the alleged terrorist funding activity of the Holy Land Foundation.

He surmised that “since September 11th, it has become increasingly socially acceptable to fear difference in others, occasionally even in the arenas of law and public policy.” And he lamented that the “label of ‘co-conspirator’ is damaging to the excellent reputation of ISNA and those who collaborate with them to build a better America.”

Probably Kinnamon had not examined the evidence against ISNA that the court case revealed. But his NCC does want to protect ISNA as a key interfaith partner, since he explained that the NCC and ISNA have been conducting a “rich” Muslim-Christian dialogue since January 2008. “In my experience working with ISNA, their leaders have offered the United States a strong and consistent Muslim voice for peace,” he reassuringly noted, citing that “their interfaith collaboration to end nuclear weapon proliferation” and “work to prevent domestic violence” as evidence that “ISNA has collaborated effectively with others to promote national security.”

So Kinnamon was bewildered about the allegations against ISNA, since “support of violent terrorist tactics seems diametrically opposed to the character of this distinguished body of the North American Muslim faithful.” He hoped that the “damage done by this discriminatory action can be reversed and that ISNA will continue to manifest God’s peace in North America.” ISNA understandably included Kinnamon in their July convention. “Working with United Methodists has taught us the value of shared experience,” added Imam Kareem Irfan, president of the Council of Religious Leaders of Metropolitan Chicago, in subsequent remarks to the United Methodist News Service. He’s the first Muslim to head the Chicago interfaith council.

Not quite three weeks before the Islamic award for the Chicago United Methodists, the Northern Illinois Annual Conference for United Methodists approved anti-Israel divestment, ostensibly in response to a “plea by Palestinian Christians for action, not just words.” A news release explained that divesting from Caterpillar, General Electric and others who supposedly profit from the “occupation” is merely a “nonviolent form of economic protest long-used by churches and other shareholders to encourage companies to end unjust practices.” Church advocates of divestment want to target companies that are “involved with the physical settlements [by Jews on the West Bank], checkpoints and the separation wall, or support activities of the Israeli military in the occupied territories.” The proposal originated with the conference’s “End the Occupation Task Force.” And the anti-Israel divestment message will be disseminated to the regional body’s 400 local congregations and about 125,000 church members throughout northern Illinois.

Presumably the Chicago-area United Methodists do not have any similar special task forces examining human rights abuses in Iran, Syria, Saudi Arabia, or Egypt, and companies that purportedly profit from the repressive policies of those regimes, which of course include the active persecution of Christians. Jewish Israel is the only target of special concern for the United Methodists in northern Illinois who, like all left-leaning churches, have been continuously losing members for decades, despite their preoccupation with “diversity” and “inclusion.”

Almost amusingly, the Chicago area United Methodists’ anti-Israel resolution was titled “Steadfast Support of Christians in the Holy Land.” Of course, the northern Illinois United Methodists are not expressing solidarity with Christians anywhere else in the world, as apparently Israel is the only, or perhaps just the worst, persecutor of Christians. Specifically the resolution cites Israel’s purported abuse of Gaza and the infamous United Nations Goldstone report about Israel’s “war crimes” and “crimes against humanity.” The resolution briefly cites Hamas rockets from Gaza against Israel but emphasizes a quote from Jimmy Carter:

“Never before in history has a large community like this been savaged by bombs and missiles and then denied the means to repair itself.”

Needless to say, the United Methodist resolution did not mention Hamas’ radical brew of theocratic Islam, which includes suppression of and legally mandated second-class citizenship (dhimmitude) for Christians. The elites of Chicago-area United Methodists, as they slam Israel and receive an Islamic commendation, perhaps envision themselves comfortably in the role of dhimmitude.