It was the year 1569, at the height of Catholicism's Spanish Inquisition in Holland. Dirk Willems, a humble and pious follower of Jesus Christ, lay in prison awaiting a fiery death at the stake. His crime? Having been rebaptized upon confession of faith in the finished work of Jesus Christ on the Cross. The official town records stated that the prisoner, "...persisting obstinately in his opinion...shall be executed by fire, until death...." 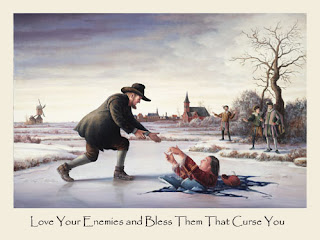 One day, Dirk, finding his cell momentarily unguarded, took the opportunity to escape. Across the nearby frozen lake he fled. The alarm was quickly raised, however, and a "thief catcher" was summoned to pursue the fleeing man. Hearing the crack of ice behind him, Dirk turned to see his pursuer break through into the frigid water. Pausing only a moment, he returned to rescue his enemy from certain death. In deepest gratitude, his pursuer pleaded that Dirk might be allowed to go free. His plea was denied. Dirk's date with death was upheld. Official records, preserved to our day, tell us that "...a strong east wind blowing that day, the fire was driven away from the upper part of his body...in consequence of which this good man suffered a lingering death."

Do we see some reflection in this account of Christ's own suffering for us sinners? The Scripture declares that "God is love." Love is His very nature. God's handiwork in creating the perfect environment for man showed in exquisite detail His forethought on behalf of the coming recipients of His love, culminating in His plan for man's redemption after the Fall. The sacrificial lamb prefigured the ultimate sacrifice of God's only begotten Son, when, in the dark hours of Calvary, He poured out His wrath against the dearest object of His love. From the Cross came Jesus' cry, "My God, my God, why hast thou forsaken me?" Jesus knew the answer to that question, though its reality was so agonizing. God's Son became sin itself and thus must suffer His Father's rejection (2 Cor 5:21).

Do we dare compare Dirk Willems's act of "redemption" with that of our Savior? Should we, as Christians, take that step beyond happily rejoicing in our salvation to that of also taking the role of sacrificial lamb, as Dirk Willems did, when the opportunity arises?

Let's enter another arena, far removed from the times of the Spanish Inquisition of the sixteenth century. We have another "inquisition" arising farther east and reaching alarming proportions in our day.

In Saudi Arabia, for example, there is a total blackout on anything Christian: one cannot carry a Bible on the street or have a Bible study in the privacy of one's own home. Even in our embassy, over which the American flag flies, Christian church services are banned. It is officially the death penalty in Saudi Arabia and some other Muslim countries (and enforced unofficially elsewhere) for a Muslim to convert to any other religion.

Only Muslims can be citizens of Saudi Arabia. Even in Arab countries where shari'a(Islamic law) is not enforced by the government, Islam's influence prevents freedom of speech, of the press, of religion, and of conscience. In PLO territories, Christian Arabs, who once had freedom under Israel, now suffer persecution, imprisonment, and death for their faith. Yet neither the UN nor our own government protests such oppression behind the Islamic curtain. Muslims build mosques and worship freely in the West, but in their own countries they deny such freedoms to others. Instead of reporting this hypocrisy, the world media covers it up.

Islam spread rapidly under Muhammad and his successors through jihad ("holy war"). Muhammad himself planned 65 campaigns and personally led 27 involving naked aggression and treachery. This incredible "evangelism" made "converts" by the millions at the point of a sword. At its peak, Islam had conquered all of North Africa and almost took over Europe.

Islam continues its conquest worldwide. Today's invaders are millions of immigrants who make converts to Islam through misrepresentation. One sees on TV well-coifed and fashionably dressed women who claim to be converts to Islam and testify to its joys and peace-loving ways. Yet in Saudi Arabia, they would have to be veiled with only their eyes showing, would have to wear plain, dark full-length robes, could not drive a car, could be one of four wives habitually mistreated by their husband, could be divorced by mere denunciation, and would be virtual slaves under shari'a.

Islam's earnest goal, set forth in the Qur'an (references given herein are from three versions) and Hadith (Islamic written tradition), remains the same: to bring all mankind into submission (that's what "Islam" means) and to kill or enslave all "infidels" (i.e., unbelievers in Allah and Muhammad his prophet - Surah 2:190-92; 4:76; 5:33; 9:5,29,41;47:4, etc.). Islam (in obedience to the Qur'an and Muhammad's example) is the driving force behind most terrorism today. According to the Hadith, Muhammad declared, "The last hour will not come before the Muslims fight the Jews and the Muslims kill them."

Instead of conversion by force, Christ said that His disciples did not fight because His kingdom was not of this world (Jn 8:36). Indeed, He told His disciples, "Love your enemies, bless them that curse you, do good to them that hate you, and pray for them which despitefully use you and persecute you" (Mt 5:44).

Christ gave His life to save sinners, and His followers must be willing to lay down their lives to bring this good news to the world. Biblical salvation is a free gift paid for by the death of Christ, who said, "Go ye into all the world, and preach the gospel to every creature" (Mk 16:15). That command includes today's one billion Muslims. They present a tremendous (and inescapable) challenge to every Christian. But how can we bring the gospel to those who may be killed for believing it, or who may kill us for offering it to them? To die fighting infidels is the only sure way for a Muslim to gain Paradise. Yet Christ also died for Muslims, and His love compels us to share the Good News.

In spite of the honor and reverence accorded Jesus, however, the Jesus of Islam is not the Jesus of the Bible but "another Jesus" (2 Cor 11:4). While the Qur'an in its early passages honors at least parts of the Bible as "the Book" and both Jews and Christians as "the people of the Book," it often contradicts the Bible: it denies that Jesus is God (3:59, 62; 4:171) and that He died on the Cross (4:157-58; 5:116-20) for our sins. Early tradition held that at Christ's request a look-alike disciple rescued Him from the Cross by dying in His place. Other passages, however, seem to declare that Christ did indeed die (3:33,55; 5:117; 19:33), and many Islamic scholars take that view today. The Qur'an denies that one person could die for another (17:13-15; 35:18). Actually, it says that no "soul laden [i.e., sinner] bears the load [sin] of another." Since Jesus was without sin, He would have to be an exception.

For the sinner to be righteously forgiven, Christ had to pay the penalty demanded by God's justice; but that concept is foreign to Islam. The Qur'an breeds uncertainty: "Forgiveness is only incumbent on Allah toward those who do evil in ignorance [and] then turn quickly [in repentance] to Allah....Lo! Allah pardoneth...all save [except] that to whom he will not..." (4:17,116). Neither "ignorance" nor "quickly" are defined nor why Allah forgives some and not others. Nor does repentance guarantee forgiveness.

In contrast, the Bible offers forgiveness to all. Christ even died to redeem those who hated Him and asked His Father to forgive those who crucified Him (Lk 23:34).

In real life, Allah's forgiveness never comes in time to prevent a hand, foot, or ear from being cut off as the penalty for stealing. Hundreds of Iraqis, mutilated by this inhumane Islamic decree, flee to camps bordering that country. Yet kidnapping requires no such mutilation because a person is not considered to be property. Fornication also requires no such mutilation, while petty thievery does.

In quoting the Qur'an and Hadith, we must avoid the impression that we are endorsing these writings. Consider Paul's discussion with the philosophers on Mars Hill: "...as certain also of your own poets have said" (Acts 17:28). Paul was not suggesting that these writers were inspired of God - and he went beyond them to to present the gospel. Likewise, we must be careful to go beyond what the Qur'an and Hadith say about Jesus to present the true gospel; otherwise there is no basis for salvation.

For a Muslim to become a true Christian, he must renounce Islam's false God, Allah, and its false gospel of salvation by works. Unfortunately, the gospel is being compromised to make it appealing to Muslims. (In the West, it's being made appealing to nearly everyone.) Many "converts" have never understood the gospel and thus have not believed that which is "the power of God unto salvation to every one that believeth" (Rom 1:16). The gospel is definitely not in the Qur'an. Yet Muslims are supposedly being saved by heeding it. The author of Building Bridges: Christianity and Islam (NavPress, 1997) gives the testimony of a Muslim "converted" to Christianity in Pakistan (p. 27):

As I was listening to the Qur'an read on the radio day after day, I heard that Christ was highly honored...and near-stationed to God. I said to myself, "If I wanted someone to intercede for me to God, who would be better than someone like Christ...?" And so I prayed, "Lord Isa [Jesus], please come to my help. I want to devote myself to God through you. Since you are highly honored and sitting near Him, you can do it."

The author then comments, "After that, he felt like a changed man, much happier than before...."

This is a delusion similar to that of those who say, "Lord, Lord, have we not prophesied in thy name?...and in thy name done many wonderful works?" to whom the Lord responds, "I never knew you: depart from me..." (Mt 7:21-23). Asking Islam's Isa to intercede for oneself will not save. One must believe the gospel to be saved:

That gospel is not in the Qur'an, and there is nothing in this "convert's" testimony to indicate that he knew or believed it.

The same author declares that "60 percent of Muslims who are approached with the methods explained in this book put their trust in Christ...." Yet Christ and His apostles experienced no such percentage of converts. Jesus said that few would be saved (Mt 7:13-14). The author enthusiastically refers to Muslims converted to Christ "while remaining [for years] in the fold of their Islamic community...without becoming detestable to their own communities" (p. 10). But Jesus warned His disciples, "And ye shall be hated by all men for my name's sake..." (Mt 10:22; Jn 15:20). All men, except Muslims?

We want to be wise and not needlessly offend in our presentation of the gospel (1 Cor 10:32), whether to Muslims or anyone else to whom the Lord gives us the grace to present the "unsearchable riches of Christ" (Eph 3:8). But there is an unavoidable offense because of Christ (Mt 26:31; Rom 9:33; 1 Pt 2:8) and the Cross (Gal 5:11). We must be careful that we actually present the gospel, which one must believe to be saved. It will only damn souls if in our zeal to get the world to accept the gospel, we preach another gospel acceptable to the world.

Let us remember Dirk Willems, who, as Christ's representative on earth in another age, willingly embraced the Cross that his enemy might live. May we, too, minister life to Christ's enemies in our age, even as we see the followers of Allah minister death. The Cross proclaims that God is love, a love that conquers by the shedding of Christ's own precious blood for sinners:

In weakness like defeat He won the victor's crown;
Trod all His foes beneath His feet by being trodden down.

Courting Shariah: Kagan supported Islam at Harvard but not the U.S. military - The Washington Times