The Gulf Oil Spill: A Sea of Blood?

Many Christians are beginning to wonder aloud whether we have entered into a period when God is visibly judging the Earth. We now seem to be wildly careening from one crisis to another. At this writing, the latest big calamity – British Petroleum’s
Gulf of Mexico oil spill – has brought endless media dramatization, wailing and gnashing of teeth. Meanwhile, secular power and authority is using this crisis to extend its grasp on global power.

Lately, several authors have written books that chronicle the coincidental timing between the U.S. policy toward Israel and catastrophic events affecting our nation. Since Israeli statehood in 1948, we have been Israel’s chief guarantor and support. Now, we are pulling away, and the world seems to be trembling in response to this ominous transformation.

In the wake of the underwater gusher, many poisonous screeds have been written, calling either for the end of deep-water drilling, or government control of the oil business. In short, a tragedy has been politicized, even to the point that President Obama resorted to profanity in an attempt to establish himself as an executive power figure. Approaching day 50 of the spill, in a television interview, he spoke of his conversations with certain oil experts. Concerning those dialogues, he said, “We talk to these folks so I know whose - - - to kick.” 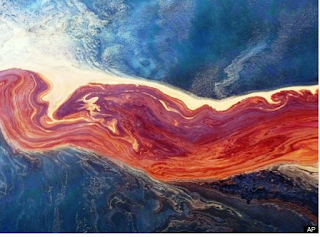 At the beginning of May, many students of Bible prophecy began to take note of the reddish color of the floating oil slick. It reminded them of blood. They then wondered aloud if prophecy had been fulfilled. Specifically, they recalled Revelation 16:3:

And the second angel poured out his vial upon the sea; and it became as the blood of a dead man: and every living soul died in the sea.

Some have speculated that if the undersea oil flow continues, all life in the sea could die. On the other hand, we have survived such oil leaks before. Another similar one happened on a Mexican rig in the Gulf and also on an Arabian rig in the Persian Gulf.

Still, there is something amazing about this latest disaster. It happened on April 20, the very day that the nation of Israel was celebrating its 62nd Independence Day, called Yom Ha’Atzmaut in Hebrew. On the very day that BP’s deepwater rig exploded, Israelis were commemorating their holiday with a national ceremony on Mount Herzl, along with national picnics, barbecues and celebration in general.

If the Lord was sending a message, He certainly chose an appropriate day to do it. Many now believe that God is actively judging the world, particularly in relation to Israel’s treatment. They view the weakening relationship between the United States and Israel with great trepidation. Bible-believing Christians understand that the Abrahamic covenant between God and Israel is still in effect. Its primary edict could not be clearer:

“And I will bless them that bless thee, and curse him that curseth thee: and in thee shall all families of the earth be blessed” (Gen. 12:3).

We believe that since Israel has once again become a nation in the modern era, it operates under this covenant. Therefore, any man or nation who stands against Israel is liable to be cursed. Some have openly stated that the blood-like slick in the Gulf is a fulfillment of Bible prophecy.

By March 25, U.S. criticism of Israel became a daily news release. In an effort to restore talks, Netanyahu and his aides made an emergency trip to the U.S. This resulted in the “dumped for dinner” disaster, in which the Prime Minister was snubbed, as Obama retired to his private quarters in the White House. Instead of a State Dinner, Obama and his aides got a brusque, “Let me know if there is anything new.” Netanyahu was said to have received “the treatment reserved for the President of Equatorial Guinea.”

Moving into April, we learned that China’s President Hu Jintao extracted a promise from the Obama government that would allow a possible UN sanction against Israel.

Quickly after that, Lebanese Prime Minister Saad Hariri, who had been widely seen as a moderate, went to Damascus to solidify ties with Bashar Assad and the Syrians. And as always, Mahmoud Ahmadinejad daily called for the destruction of Israel.

Because of deteriorating U.S. support, Israel had suddenly arrived at the position of being openly derided as an international pariah. This massive change had taken only a little over a month.

Then came April 20th, and the explosion in the Gulf. Many in the Christian community reacted by saying that God was judging the U.S., directly as a result of having dropped its longstanding support for Israel. The greater the extent of the oil slick, and the more its resemblance to blood on the water, the more people took notice.

“In the Last Days, Scoffers …”

On June 4th, Newsweek magazine took note of this, using the moment to blow the whistle on Christian fundamentalists, ridiculing the suggestion that God may now be judging the world in a series of catastrophes.

In an article by Lisa Miller, the magazine published the following:

“To some Christian fundamentalists, the oil plume in the Gulf of Mexico heralds the apocalypse.

“A growing conversation among Christian fundamentalists asks the question that may have been inevitable: is the oil spill in the gulf a sign of the coming apocalypse?

“About 60 million white evangelicals live in America, and about one third of them believe that the world will end in their lifetime, according to the Pew Research Center for the People and the Press. Broadly speaking, these Christians subscribe to
a theology called “premillennial dispensationalism.” In this world view, they are warriors on the side of God: a cosmic battle — culminating in apocalypse, judgment, and, finally, the reign of Jesus in “a new heaven and a new earth” — will come soon. The most determined of these believers mine the Book of Revelation for signs that the end is near. A text of terrifying and mysterious prophesy, Revelation forecasts the apocalypse in coded language; Christians have spent lifetimes trying to break that code by correlating its verses to current events. (A New York minister named William Miller used Revelation and other sources to predict that the world would end on Oct. 22, 1844. He had previously predicted — wrongly, obviously — that the date would be March 21, 1843. The Millerites, once a powerful and fast-growing sect, quickly became extinct.)”

It is clear that Lisa Miller blissfully envisions the day when premillennial dispensationalists become extinct, just like the 19th-century Millerites.

“Now blogs on the Christian fringe are abuzz with the possibility that the oil spill is the realization of Revelation 8:8-11.

‘The second angel blew his trumpet, and something like a great mountain, burning with fire, was thrown into the sea. A third of the sea became blood, a third of the living creatures in the sea died, and a third of the ships were destroyed … A third of the waters became wormwood, and many died from the water, because it was made bitter.’

According to Revelation, in other words, something terrible happens to the world’s water, a punishment to those of insufficient faith. The foul water, according to the New Oxford Annotated Bible, mirrors one of the plagues God called upon Egypt on behalf of his people Israel.”

She goes on to quote those in the Christian community who believe that the red tinted water really looks like blood, and that this could not possibly be a coincidence. Her scoffing tone makes it clear that she, along with the editors of Newsweek, see such speculation as ridiculous.

But Christians who are sensitive to the subtleties of Bible prophecy cannot deny the obvious connection between the building U.S.-Israel conflict and the climactic explosion that came on the very day that celebrates Israel’s modern statehood. We are not yet in the Tribulation, so the oil spill cannot be a fulfillment of prophecy in the judgments in the Book of Revelation. Still it may be a foreshadowing of things soon to come.

On the 20th of April, an information service called Standing with Israel News published Independence Day remarks made by featured speakers. Their remarks were tinged with the acknowledgment of the gathering storm.

“Knesset Speaker and veteran leader Reuben Rivlin warned against ‘fatal segregation’ of Arabs and Jews, and secular and haredi religious Jews, in Jerusalem.

“Defense Minister Ehud Barak said, ‘The tension that is developing with the United States is not in Israel’s interest.’”

And then the oil rig exploded.

What is the Great Tribulation? - GotQuestions.org