You have to hand it to US President Barack Obama. He is relentless. Just when you thought he was shifting gears - easing up on Israel and turning his attention to Iran's nuclear weapons program - he pulls out a zinger.

His recent courtship of Prime Minister Binyamin Netanyahu led some Israelis and supporters of Israel in the US to believe the administration had seen the light. After 18 months, we were told Obama finally realized that contrary to what he had thought, Palestinian statehood is not the most urgent issue in the Middle East, Iran's nuclear weapons program is.

In the past week alone, two prominent commentators - Aluf Benn from Haaretz and Ehud Ya'ari from Channel 2 both wrote articles claiming that Obama's Middle East policy has undergone a transformation. As Benn put it, "President Barack Obama's campaign of wooing Israel reflects a fundamental about-face in US policy in the Middle East."

And in Ya'ari's words in an article in the Australian, "The foreign policy team of US President Barack Obama is undertaking a reassessment of its policy all over the Middle East, including Israel."

Both claimed the administration has resolved to cooperate with Israel as an ally rather than attack it as an obstacle to peace, and that Washington has recognized that Iran must be prevented from acquiring nuclear weapons.

The basic notion informing both of these nearly identical articles is that the Obama administration's foreign policy is fundamentally pragmatic rather than ideologically motivated. Both Ya'ari and Benn, like many of their fellow commentators on the Left, argue that Obama's decision to invite Netanyahu to Washington and treat him like an ally rather than an enemy is proof that when stripped to its essentials, his foreign policy is pragmatic.

After a year and half in office, Obama recognized that his previous view of the Middle East was wrong. And as a pragmatist, he has embarked on a new course.

Yet before the ink on their proclamations had a chance to dry, Obama demonstrated that their enthusiasm was misplaced. Late last week the administration decided - apropos of nothing - to upgrade the diplomatic status of the PLO mission in Washington. 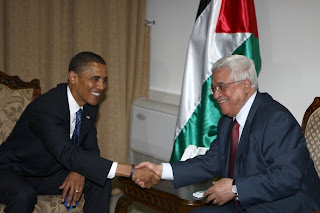 From now on, the PLO will be allowed to fly its flag like a regular embassy.

Its representatives will enjoy diplomatic immunity just like diplomats from states.

Indeed the PLO delegate in Washington Maen Areikat claimed that the administration's move equates the PLO's diplomatic status in the US to that of Canada and states in Western Europe.

Some in the media have claimed that this is a symbolic act and essentially meaningless.

But this is not true. While this step does not constitute US recognition of a Palestinian state in the absence of a peace treaty between the Palestinians and Israel, it certainly sends a clear signal that this is the direction the US is heading. As such, it represents a dangerous step that will encourage continued Arab hostility.

To put this move in perspective, it is worth comparing the PLO's new status to that of the US's firm ally and fellow democracy - Taiwan, the Republic of China. Whereas the PLO now has a "delegation general" in Washington, Taiwan has the "Taipei Economic and Cultural Representative Office."

When asked to comment on the move, White House spokesman Thomas Vietor said, "This decision reflects our confidence that through direct negotiations, we can help achieve a two-state solution with an independent and viable Palestine living side by side with Israel. We should begin preparing for that outcome now, as we continue to work with the Palestinian people on behalf of a better future."

Like the decision itself, Vietor's explanation signals that the Obama administration has not embraced pragmatism over ideology. Vietor could never have made his statement if it had.

Any pragmatic analysis of the situation leads to the clear conclusion that there is little chance of the Palestinians agreeing to a settlement anytime soon. Just this past week Fatah leader Mahmoud Abbas escalated still further his already unacceptable preconditions for direct negotiations.

Now in addition to his absurd demand that Israel agree ahead of time to withdraw to the indefensible 1949 armistice lines, Abbas is demanding that it also agree to withdraw all of its forces to those lines and accept the deployment of foreign forces along its borders with the Palestinian state.

These are demands that no government in its right mind would accept in direct negotiations, let alone as a precondition for them.

And any pragmatic US administration upon hearing these demands would recognize that there is no chance that the Palestinians will agree to any reasonable offer of a peace treaty in the foreseeable future.

Indeed, for any pragmatic US administration, the message to send at this time is that statehood can be achieved only by getting serious about negotiations. That means clarifying that statehood is not inevitable but, rather a potential result of Abbas deciding to abandon his preconditions and get serious about talks.

In line with this, if the US intends to recognize a Palestinian state formed in the framework of a negotiated peace settlement, then it is utterly ridiculous, in the face of Abbas' latest pronouncements, for it to upgrade the Palestinians' diplomatic status. The move makes sense only if the US is secretly preparing to help the Palestinians avoid negotiations and obtain a state that is not established in the framework of a peace treaty.

This is the case because there is no Palestinian leader - not the US favorites Mahmoud Abbas and Salam Fayyad and not their competitors in Hamas - who accepts the legitimacy of the Jewish state. And so any state formed outside the framework of a peace treaty will be in a de facto state of war with Israel. Indeed, its legitimacy with the Palestinian people and other Arabs will be defined by its commitment to the eventual destruction of the Jewish state. And now, by upgrading the PLO's mission, the Obama administration is actively encouraging just such an outcome.

Obama's decision shows that he has not allowed reality to interfere with his perception of the absence of a Palestinian state as the most urgent problem he faces in the Middle East. He has adopted other measures that indicate that he remains fundamentally unconcerned about the threat that Iran poses to both US national security and to regional security in the Middle East.

That threat has been spelled out clearly in recent weeks by top US officials. Last week the outgoing US commander in Iraq, Gen. Ray Odierno, told reporters that Iran fields three Shi'ite militias in Iraq whose forces are attempting to attack US troops as they withdraw from the country. Iran's goal is to present the image that the US is withdrawing in defeat.

As for Afghanistan, last March the Sunday Times reported that Iran is training Taliban fighters at camps inside Iran. Last Wednesday the deputy commander of the Iranian Revolutionary Guards Corps threatened that US commander Gen. David Petraeus will be overwhelmed by terror in Afghanistan.

Brig.-Gen. Massoud Jazayeri told the Iranian media, "The presence of Petraeus in Afghanistan will increase terrorism and seal the expansion of American failures.

The US government has no chance of success as the igniting flames which will engulf America in Afghanistan are already visible."

Then there is Iran's nuclear weapons program.

As CIA Director Leon Panetta said last month, sanctions on Iran will "probably not" deter the regime from moving forward.

If Iran becomes a nuclear power it will be able to wreak havoc on oil shipments from the Persian Gulf. So too, it will make it all but impossible for the US to safely protect its military force in the region. The current threat that Iranian proxies will force US troops to flee Iraq and Afghanistan will likely be realized.

Furthermore, Kuwait, Bahrain and Qatar can be expected to expel US forces from their territory as the regimes cut deals with the new regional nuclear power.

Obama recently ended his public support for appeasing Iran and seemed to adopt a more confrontational approach as he moved to pass a new round of sanctions at the UN Security Council and when he signed congressional sanctions. But rhetoric aside, as Michael Ledeen reported at Pajamas Media Web site last week, his appeasement policy remains in force.

Since 1979 the Swiss Embassy in Teheran has represented US interests. According to Ledeen, last week the Swiss ambassador submitted a request from US congressmen to meet with their Iranian counterparts. The Iranians rejected their request out of hand.

What this means is that the Obama administration - now working through congressional proxies - is still trying to cut a deal with Mahmoud Ahmadinejad and Ali Khamenei.

All of this makes clear the sort of leader Obama is. He is a pragmatic politician and a radical ideologue all rolled into one. The pragmatic politician understands that going into the congressional elections in November, he has to convince the US public that he is a reliable ally for Israel and that he is credible on Iran. So he invited Netanyahu to Washington for a public hug and he made angry declarations about Iran's nuclear program.

As an ideologue though, even in the midst of his charm offensive he couldn't resist the urge to attack the Jewish state, so he signaled that he will recognize a Palestinian state that does not recognize it. And as an ideologue, he can't stop begging the Iranians to love him.

The desire of commentators like Benn and Ya'ari to believe that the US government is behaving rationally is understandable. But their wish is unsupported by facts.

We can only hope that Netanyahu has not been similarly fooled.