A Forecast of Economic Doom

The folks at the Office of Management and Budget have released an update of the budget deficit. The latest estimate shows the budget deficit reaching a record $1.47 trillion this year. The government is now borrowing 41 cents of every dollar it spends.

The forecast for the U.S. is incredibly dire. The gap for 2011 is only seen narrowing to $1.42 trillion. Projections show the U.S. national debt doubling between now and 2020, when it's forecast to hit over $26 trillion. These latest figures show the debt will top 100 percent of the nation's Gross Domestic Product in 2012.

The outlook for jobs is equally grim. The estimate for unemployment has the economy experiencing a relatively jobless recovery. The unemployment rate, presently averaging 9.5 percent, would average 9 percent next year under the new estimates. By 2012, the unemployment rate will still be above 8.1 percent.

What is truly scary about these numbers is that they come from the federal government. The Office of Management and Budget has always painted the most rosy vision for future budgets. This current forecast is criticized for being overly optimistic for economic growth. The projects call for 3.2 percent this year, 3.6 percent in 2011, and 4.2 percent in 2012. The vast majority of the Wall Street economists see us as being lucky to stay at about zero growth.

The real problem with our national debt rests with entitlement programs. There are simply too many people living off government handouts. 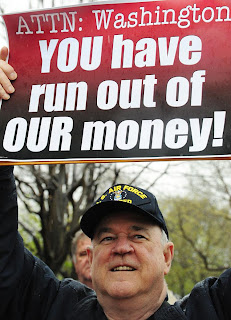 Author Alexis de Tocqueville added to this idea, saying, "The American Republic will endure, until politicians realize they can bribe the people with their own money."

Our path towards socialism began when President Franklin Roosevelt signed the Social Security Act into law on August 14, 1935. “We can never insure one hundred percent of the population against 100 percent of the hazards and vicissitudes of life, but we have tried to frame a law which will give some measure of protection to the average citizen and to his family against the loss of a job and against poverty-ridden old age,” said Roosevelt.

Decades later, we have reached the point where Tyler and Tocqueville have been proven correct. The name of the game is to get as much as you can from the government.

Right now, the state of Illinois is suffering from one of the worst recessions since the depression. Illinois is currently $13 billion in debt and faces a massive budget crisis. Despite the hard times, Illinois construction workers are demanding a wage increase of 15.9 percent over the next three years. They currently make $50 to $68 an hour.

Last week in Bell, California, the salaries of three municipal officials sparked a firestorm of outrage. Robert Rizzo, the city manager, was being paid $784,637. The assistant city manager earns $375,000, and the police chief was getting $475,000. Rizzo has stepped down, but that doesn't end his burden on the city. The fifty-six-year-old will draw an immense pension, between $650,000 and $880,000 per year.

I find it amazing that the focus on our financial debt problem seems to be waning. People seem to have adopted a "what-I-don't-see-can't-hurt-me" mindset. I've stayed on this story because I know we can't go on like this for very much longer.

We are eventually going to hit the wall. When the financial system breaks down, people may be shocked at how fast our economy implodes. Iceland and Greece were relatively stable nations, but within a matter of days, both nations found themselves facing national bankruptcy. Lucky for them, they are small nations that were able to get a handout from the global community.

America is too big for any bailout. At best, the world could put together a trillion-dollar rescue package. We would burn that amount of money in a matter of months. If we should collapse, the rest of world will either seek shelter or try to profit from our downfall.

I am as certain as I can be that a huge financial collapse is headed our way. The timing seems to imply that it has a strong link to prophecy. If that is the case, the only rescue package I’m looking forward to is the one from the Lord Jesus Christ.

"Watch ye therefore, and pray always, that ye may be accounted worthy to escape all these things that shall come to pass, and to stand before the Son of man" (Luke 21:36).

An Admission of Failure - The Heritage Foundation