Today Tish B'Av, the 9th day of the Jewish month Av, is the day on the calendar in 586 BC and 70AD that both the first and second temples were destroyed. The first temple being destroyed by the Babylonian army led by Nebuchadnezzar and the second temple devastated by General Titus and the Roman army.

Jews on this day gather near the area where these temples once stood at the Western Wall and during the 25 hour fast they read the book of Lamentations and pray for the temple to be rebuilt by next Tish B'Av, a prayer that has been prayed every day for over 1900 years. 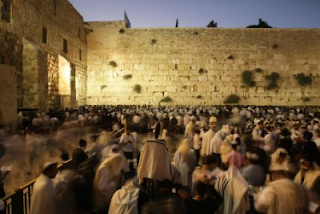 Even as America applies pressure on the Israeli government to give up the Temple Mount, there are Jews preparing to follow through on their prayers for a Jewish temple on the Temple Mount. They have everything ready to build the next temple and fulfill Bible prophecy.

On Tish B'Av hundreds and thousands of Jews gather at the Western Wall in Jerusalem and at the seven gates that lead up onto the Temple Mount to read the book of Lamentations and to pray for the temple to be rebuilt by next Tish B'Av.

US pressure on Israel to give up the Temple Mount is in the face of God's plan for this sacred piece of real estate. 2500 years ago the ancient Jewish prophet Zechariah prophesied that the Messiah, Jesus Christ, would come back and build His temple, the kingdom temple, on the Temple Mount (Zechariah 6:12). I must remind you, however, that before Jesus builds His temple, there will be a temple in the seven year Tribulation period (Daniel 9:27, Matthew 24:15, II Thessalonians 2:4, and Revelation 11:1.) This next temple will be desecrated by the false messiah, the Antichrist. All preparations have been made for that temple, the tribulation temple, to be rebuilt and they could start construction today.

On Tish B'Av remember - Bible prophecy will be fulfilled.

Remembering the Destruction of the Jewish Temples - Joel Rosenberg's Weblog