Egypt’s President Hosni Mubarak has been diagnosed with terminal stomach cancer, and is not expected to live beyond a year. After that, the uneasy equilibrium of Egyptian politics could be violently disrupted, with the possibility for escalation in the Middle East and beyond. The Islamic supremacist Muslim Brotherhood, from which sprang both Hamas and Al-Qaeda, could attempt to seize Mubarak’s death as an opportunity to try to take power in Egypt. Mubarak’s son Gamal, however, appears to be determined not to let that happen. It is by no means beyond the realm of possibility that armed conflict could result – conflict that could be the deadly match in the Middle East’s tinderbox. 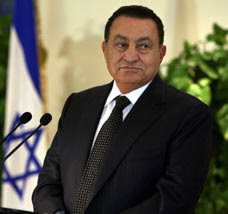 Officially, the Muslim Brotherhood is banned in Egypt, but its candidates often run in elections as independents – winning one-fifth of the seats in the 2005 parliamentary elections. Since the presidency of Gamel Abdel Nasser (1956-1970), the Egyptian government has practiced steam control with the Brotherhood, looking the other way as the group terrorized Coptic Christians and enforced Islamic strictures upon the Egyptian populace, but cracking down when the Brotherhood showed signs of growing powerful enough to actually seize power. Shortly before he was assassinated by members of another Islamic supremacist group that was enraged by his peace treaty with Israel, Nasser’s successor Anwar Sadat not only released all the Brotherhood political prisoners who had been languishing in Egyptian prisons, but also promised the Brotherhood that Sharia would be fully implemented in Egypt.

The Islamization of Egypt has been proceeding steadily for decades. While in the 1960s women wearing hijabs were rare on the streets of Cairo, now it is rare to see a woman not wearing one; the Brotherhood’s societal and cultural influence has long outstripped its direct political reach, and shows no sign of abating. Nonetheless, nearly thirty years after Sadat’s promise, the Brotherhood is still waiting for that full implementation of Sharia. Mubarak’s son and heir apparent, Gamal Mubarak, said in a July 2008 interview that “religion” was one of the “most important components” of Egyptian society and culture.” Yet he maintained that Egypt’s “constitution formally prohibits confessional political parties and the use of religion in political discourse.” He added, in clear reference to the Brotherhood and allied Islamic supremacist groups:

But this is not enough. During the last months, these groups have been trying to take advantage of the difficulties our country is going through. By multiplying anti-Western references, they are building barriers between the different cultures. They are destroying the bridges between the Eastern and Western worlds that the past generations had so much trouble building. That is the worst thing that could happen.

Gamal Mubarak’s remedy for this growing Brotherhood influence involved “audacious leaders who are able to prepare their country for the future and implement some reforms even when they are unpopular. Such a leader must be brave enough to remain faithful to his convictions, despite all opposition.”

But is Gamal himself such a leader? Middle East analyst Barry Rubin tells Frontpage that “he has some good characteristics – pragmatism and moderation – but his age, lack of military experience, and limited charisma are against him.”

And what could happen if Gamal failed? “If Gamal did not rule well and consolidate his support,” Rubin continues, ” there could be some kind of coup against him. In addition, the Brotherhood could gradually grow in power to fill the vacuum and exploit the discontent. The Brotherhood cannot take over for some years to come. The danger is a longer-term one.”

Indeed, but the Brotherhood is working hard now in the short-term. Recently it came out strongly for the presidential candidacy of Mohamed ElBaradei, the former Director General of the International Atomic Energy Agency (IAEA). Brotherhood leaders may be banking on being able to exploit the popular discontent with the Mubarak regime that is unwilling to take up the cause of the Brotherhood itself, and to holding real power in a weak ElBaradei presidency. ElBaradei is widely regarded as ineffectual. Dr. Michael Widlanski of the Jerusalem Center for Public Affairs saw his abject failure to stop Iran’s nuclear program as an indication of how effective he would be as president of Egypt:

“If he’s soft on a nuclear Iran, how much help will he be against the Muslim Brotherhood or Hamas or Hezbollah?”

But the Brotherhood is not necessarily hoping for an ElBaradei presidency at all. Hossam Tamam, a political analyst and former editor at the Islamic supremacist website IslamOnline, offers an alternative scenario: that the Brotherhood is using its support for ElBaradei to win concessions from the Mubarak regime:

If the Brotherhood succeeds in imposing a strident Sharia regime in Egypt via a figurehead or weak ElBaradei presidency, the Camp David Accords, already much transgressed and ignored by Egyptian authorities, could be swept aside altogether. Egypt could follow Turkey’s path of a new belligerence toward Israel as it jockeys for power with the Saudis and the Turks among the major players of the Sunni Muslim world. If, on the other hand, it wins enough concessions from Gamal Mubarak and his ailing father to push forward its agenda with new energy, confidence, and power, an Egyptian Sharia state inveterately hostile to the United States and Israel is not necessarily forestalled, but merely postponed.

Hosni Mubarak is the third in a row of Egyptian strongmen who have kept a lid on the Brotherhood’s power and preserved Egypt as a relatively secular republic for over fifty years. He could be the last. And the chaos that could follow in the wake of his death could spread far beyond the borders of what is still, at least putatively, the Arab Republic – not yet the Islamic Republic – of Egypt.

Analysis: How would Mubarak's successor affect the IDF? - Jerusalem Post

Mubarak Will Die Within One Year, Intelligence Sources Report - INN

Psalm 83 or Ezekiel 38 - Which is the Next Middle East News Headline? - BPT (Bill Salus)