Tisha B'Av and Sovereignty on the Temple Mount

All public transportation silenced, all restaurants closed in Jerusalem on Monday evening as the sun set. The Hebrew day of great tragedies, Tisha b'Av, fell at sundown. In remembrance, tens of thousands of Jews gathered at the Western Wall to pray and petition the God of Abraham, Isaac, and Israel.

Tisha b'Av is simply Hebrew for the 9th day of the month of Av, and it completes the Three Weeks of mourning that began with the Fast of Tammuz. Many disasters have befallen the Jews on the 9th of Av throughout history. According to Jewish tradition, this was the day that God told the Children of Israel they were prohibited from entering the Promised Land because of disbelief. They were forced to wander in the desert forty more years until that adult generation had died out. That tragic day was just the beginning…

The day has continued to be associated with grief for the Jewish people throughout history. For example, Pope Urban II declared the Crusades on the 9th of Av in 1242. The Jews were expelled from Spain in 1492 on this day, and in 1942, the Jews in the Warsaw Ghetto were mass deported to the Treblinka extermination camp in Poland. Thus the 9th of Av, Tisha B'Av, has become a symbol of all the persecutions and misfortunes of the Jewish people, for the loss of their national independence and their sufferings in exile. Above all, it is a day of intense mourning for the destruction of the Temple.

This week, Jews look toward the Temple Mount with even more longing than normal. Israel has technically controlled the Temple Mount since the Six-Day War in 1967, but the Waqf, a Muslim council, manages the site, which is noticeably dominated by the al-Aqsa Mosque and the Dome of the Rock. Israeli law is supposed to protect free access to the site, but the Israeli government enforces a ban on any non-Muslim prayer on the Temple Mount in order to avoid Muslim riots. Tuesday morning three Jews were removed from the area after allegedly "trying to cause a provocation" (which could have just included praying there), and the Temple Mount was closed to visitors at 11am.

But while Israel enforces the prayer ban and the Waqf's oversight, there is still a deeply felt belief in the Knesset that Israel has greater legitimate rights to the Temple Mount than do the Muslims. In the Knesset on the 9th of Av a year ago, Dr. Mordechai Keidar commented on the lack of a Palestinian connection to the Temple Mount, saying:

"Jerusalem does not appear in the Koran, not even once, not even in any one of the four different names the city has in Arabic. The struggle for Jerusalem is not territorial, it's theological. Is Judaism still a relevant religion, or do we give in to the Muslim claim that Judaism is no longer relevant? And that's why we heard from PA official Saeb Erekat not long ago that they will not recognize the State of Israel as a Jewish state even in 1000 years. Why is this? Because Judaism in their eyes is irrelevant, so how could a Jewish state be founded?"

Keidar also noted that the Palestinians are not moderate on the issue of Jerusalem and the Temple Mount, but claim it as their own. He held up a PLO traditional garment, which bore the words, "Jerusalem is ours." 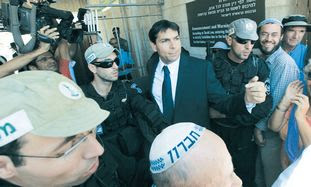 Not all Jews want people flooding the Temple Mount, however. Nobody is certain exactly where the Holy of Holies was located, and these faithful Jews do not want the unwitting visitor to tread on that spot. Worshipers must first be cleansed with the ashes of the red heifer, as required in Numbers 19, before Jews can worship freely in the Temple area.

East Jerusalem and the Temple Mount have been points of major contention in past efforts to negotiate a two-state agreement. The Palestinians want East Jerusalem, and the Jews do not want to give up this location that is so precious to Judaism. The world would never expect the Muslims to hand over control of the Kaaba in Mecca in order to keep peace, but the Jews are not free to worship on their holiest site because they fear Muslim violence.

A Day of Mourning.... And Future Joy

Tisha b'Av is indeed a day of mourning. It is marked with sadness and fasting from food and drink. Observant Jews avoid bathing or washing clothes or enjoying entertainment like music or movies, and the Book of Lamentations is traditionally read both in the evening and during the day. On this day the Jews are reminded of their tragic history.

Yet, this day is also expressly linked with Israel's glorious destiny. The Jews also look forward to the ultimate rebuilding of the Temple, to a time when Tisha b'Av will become a day of joy and gladness (as it was foretold in Zechariah 8:19).

We do know that the Temple will be rebuilt because Jesus, John, and Paul all make reference to it (Matt 24:15; Rev 11:1, 2; 2 Thess 2:4). But we also know that this Temple will be desecrated by the Coming World Leader when he sets himself up to be worshiped (2 Thess 2:3-4). It is possible this prophetic event will also take place on Tisha b'Av - and may happen in the not-too-distant future.

A Commentary on the Tribulation Temple - SpiritandTruth.org (Tony Garland)