Why There Should Be No Mosques at Ground Zero

Now that it has been revealed that not one, but two mosques are planned for the area around Ground Zero, the supremacist and triumphalist character of this effort is clearer than ever. Is the Muslim population of lower Manhattan so huge that one projected mosque — even one so large as to be housed within a 15 story Islamic Center — would immediately be bursting at the seams, and thus yet another is required even before the first is built? 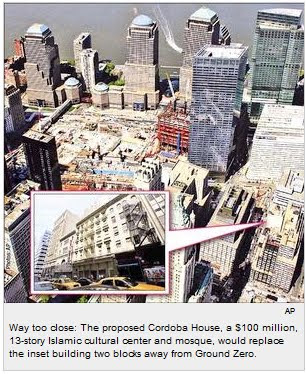 Of course not. Muslims are already praying at the projected site of the massive Islamic Center, an old Burlington Coat Factory outlet that was damaged by a piece of one of the hijacked airplanes fell through the roof on 9/11. (A Muslim real estate company paid $4.85 million in cash for the building. Where that cash came from has not been explained).

That building doesn’t appear to be overflowing, although Muslims are reportedly holding prayers on the sidewalk outside another lower Manhattan mosque, apparently in order to give the impression that they’re in dire need of more space. This is, however, more for show than for necessity.

The placement of mosques throughout Islamic history has been an expression of conquest and superiority over non-Muslims. Muslims built the Al-Aqsa Mosque and the Dome of the Rock on the site of the Jewish Temple in Jerusalem in order to proclaim Islam’s superiority to Judaism. The Umayyad Mosque in Damascus was built over the Church of St. John the Baptist, and the Hagia Sophia Cathedral in Constantinople was converted into a mosque, to express the superiority of Islam over Christianity. Historian Sita Ram Goel has estimated that over 2,000 mosques in India were built on the sites of Hindu temples for the same reason.

But the Ground Zero mosque, or mosques, won’t be another example of that Islamic supremacism, will they? After all, the mosque initiative’s organizer, Imam Feisal Abdul Rauf, has said that the building of the mosque by the World Trade Center site was intended to make “the opposite statement to what happened on 9/11.”

The group behind the 15 story Islamic Center sent a statement to Mike Huckabee’s show on Fox News (declining an opportunity to meet my colleague, Pamela Geller, to discuss the mosque issue), claiming that the planned mosque was “a project to honor those who were harmed on September 11. It is a project to proclaim our patriotism to this country and to stand side-by-side all men and women of peace.”

And Ground Zero is not a holy site, so the symbolism of Islam conquering and replacing other religions isn’t there - or is it?

The Twin Towers, after all, were the symbol of America’s economic power. Placing a mosque by the site of their destruction (at the hands of Islamic jihadists) symbolizes the taming of that power. Abdul Rauf has placed the blame for 9/11 not on jihadists at all, but on the U.S. and the West, saying that they “must acknowledge the harm they have done to Muslims before terrorism can end.” Statements like that call into question just who the mosque organizers have in mind when they say the mosque is intended to honor “those who were harmed on September 11.”

The possibility of deception cannot here be ruled out, given that Abdul Rauf has a history of making smooth statements that appear to endorse American principles and values, when on closer examination he is upholding Sharia law, denigrating freedom of speech, and advocating against anti-terror measures.

It was to honor the Americans who really were harmed on September 11 that Pamela Geller has organized, with help from me and our new group, Stop Islamization of America, a rally against the 9/11 Mosque. The rally will be held on June 6 in lower Manhattan. June 6, D-Day, was chosen because on that day Americans began to beat back from Europe the scourge of a totalitarian and genocidal ideology. Today, no less unmistakably, it is incumbent upon us to stand and defend the principles of freedom that are once again threatened, this time by Islamic jihadists.

An Open Letter to Mayor Bloomberg and Electeds: Stop the Ground Zero Mosque At Once - Family Security Matters

Reasoning from the Scriptures with Muslims - Ron Rhodes (Book)