It is quite ironic that while a member of the left like Noam Chomsky would reject biblical truth, especially as it relates to Israel being a fulfillment of predictive prophecy, Chomsky himself unknowingly affirms many of those very prophecies. 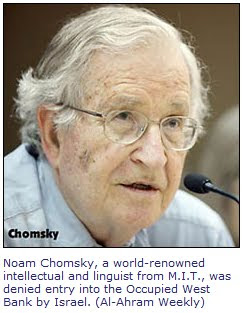 This past week, Chomsky, a linguistics professor at MIT, was denied entrance into Israel, where he was due to give a lecture to students at Bir Zeit University, near the West Bank city of Ramallah; the institution is a hot-bed of Palestinian activism.

Instead, Chomsky gave the lecture via video link from Amman, Jordan, no doubt a country with which the leftwing Chomsky is rather chummy, given his anti-American, anti-Israel rantings of the past half-century.

Speaking to the press, Chomsky had this to say:

“He told the paper that Israel's behaviour reminded him of that of South Africa in the 1960s, when it realised it was already considered a pariah, but thought it would resolve the problem with better public relations.”

Israel as pariah. How interesting that the linguistics professor, who understands language so well, would use that term to describe the only progressive society in the Middle East. Chomsky, you see, has never had the privilege of living in a totalitarian state. Rather, he writes lovingly of them from the brutal confines of dark and ghastly America.

(You’ll appreciate, I hope, that the preceding sentence was tongue-in-cheek.)

When Zechariah (and other prophets) wrote thousands of years ago that, in effect, Israel would one day find herself a pariah in the international community and be the target of a globally coordinated attack, the very thought seemed preposterous.

Now, not only is the idea of Israel as black-sheep outsider plausible, it is reality. When radical Muslims the world over are blowing people up, it is easier for dream-catcher thinkers like Chomsky to pontificate against the victim, in this case, Israel.

Chomsky has long raged against American and Israeli actions to defend themselves, or others who are being brutalized by various thug regimes. It is also interesting to note that a guy like Chomsky can criticize, say, the dropping of atomic bombs on Japan to prevent a million American soldiers from invading the homeland. Again, it’s easy to criticize when you haven’t fought for your country. Notice that the guys who gave us our freedom, with their blood, come home and keep their mouths shut and work hard for their families, while radical anti-Americans like Chomsky also share that freedom, and repay our boys by bashing them. In the same way he treats the IDF with disdain, and it is probably the most moral fighting force in world history.

In human terms, Israel is in peril. Physical, political, and moral dangers surround her like a pack of jackals.

Although I probably sound like I’m not making sense to many when I sound-off about American Christianity. It’s just that after observing things for well over a decade, I’ve concluded that the great shift in dialogue has occurred, in which origins issues are now somewhat mainstream — thanks to the efforts of groups like ICR and Creation Ministries International. They have made creationism much more accepted.

Now, the debate within the Church and wider society is, what to do about Israel? I maintain, though it may not be a popular position, that support for Israel is weakening, in terms of numbers and influencers — especially influencers. A prediction: most if not all major ministry leaders in the U.S. in the next decade will abandon Israel.

It is already becoming politically expedient for them to do so. For example, Rick Warren is no friend of Bible prophecy; by extension, I maintain he is no friend of Israel (see his chummy visit with Syrian dictator Bashar Assad a couple years ago).

Now, Warren has so infected the Southern Baptist Convention, that whatever he says, thousands of pastors are going to do. Not all, but many. Watch for leaders like him to subtly move away from Israel.

And Christians on the left, like Tony Campolo and Brian McLaren, would no doubt be friendly with Chomsky; he shares their worldview.

But when it comes to Israel, they also share the same worldview with increasing numbers of American Christian leaders. There is latent anti-Semitism running through these ranks.

In many cases, they are not. The American mind cannot wrap itself around the idea that some people lie. You’d be shocked if you knew how much the Arabs lie about Israel.

The corrosive effect in the church is that leaders begin to turn away from the Jewish state. It is then a short step to Israel becoming a pariah.