Greece, Thailand, America, and the Rapture

Greece and Thailand face mobs of addicted citizenries that have been put on rations. Having for years been the wards of government-engendered employment and socialistic largess, the people of those nations are enraged by the realities of painful withdrawal.

Greece has been required by the European Union to put into effect severe austerity measures in order to qualify for a massive bailout. Without the almost trillion-dollar infusion, Greece would become insolvent, a thing the EU and Western democracies cannot allow to happen.

It was a weekend rich in symbolism. Sunday, May 9, was Europe Day, the 60th anniversary of the moment when France, Germany and the other war-shattered European states declared they would pool their resources in a supranational community. The message — from crisis comes opportunity — was not lost on today's generation of European leaders. With Greece seemingly on the brink of insolvency and markets pounding other vulnerable euro members like Portugal and Spain, the continued viability of the single currency — the European Union's most emblematic project — is under threat. So in the early hours of Monday morning, after weeks of indecision, Europe's leaders met the challenge by setting up a colossal €750 billion ($950 billion) crisis fund. (Leo Cendrowicz, "The E.U.'s $950 Billion Rescue: Just the Beginning," Time, 5/10/10, - My thanks to Dana Neel.)

The International Monetary Fund/eurozone bailout stipulated that the Greek government drastically cut its huge deficit of 13.6 percent of the nation's GDP. Jay Bryson, global economist at Wells Fargo Securities said that Europe's monetary crisis won't ease "until money starts to flow" to Greece from the EU/IMF. He said the crisis will probably linger for a time even with such measures. 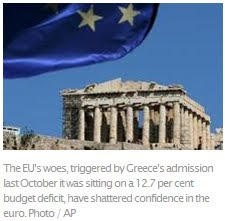 The Greek national government has had to do away with a large number of jobs that were linked directly to public services and bureaucratic positions. Ever-increasing government controls destroyed incentives for creating private sector employment. Demands by Greek citizenry (mostly government employees' unions) that they could retire with full benefits as early as age 45 in some cases, age 53 on average, and massive expenditures on public social services drove deficit spending to calamitous levels.

Austerity implementation and its effects on Greek society have been profound. Rioting in the streets has brought things to the crisis level, and has drawn a harsh response from police and the military. The EU/IMF infusion of a trillion dollars is only a stop-gap effort to try to prevent total implosion of Greek society, thus, possibly, the EU itself. When the people have been given their fix to assuage the pain of their weaning off the government spigot - what then?

Thailand is perhaps even more bloody than Greece in the government-vs.-the unions clashes. Thailand's workers have become accustomed to a bureaucratic handout system/society.

Thailand's fledgling democracy is now all but dead; bloodied and battered on the streets of Bangkok. How did this happen?

The above question, posed by ABC News, frames the situation precisely. America's heretofore relatively stable ally in Southeast Asia is in the process of meltdown because of economic crisis. The government is in disarray due to conflict primarily brought on by handing out more money to the populace than can be sustained, for purposes of gaining political advantage.

Riots fill the streets of Bangkok. A continuing battle rages between the government forces of a brutal, unresponsive government that seems for the moment to be winning the day over the "red shirts" - organized workers against what they perceive as government discontinuing the policies of universal health care, infrastructure investment, local economic stimulus, and agricultural debt relief which they had come to expect as guaranteed rights.

The fact is, Thailand is mischaracterized in ABC's calling it a "fledgling democracy. Like Greece, the masses are addicted to getting socialistic largess for their votes. The government, used to being in favor because of, in effect, buying votes with a Thai version of pork-barrel spending, is reacting as many socialistic governments react when opposed. Many believe Greece and Thailand are well down the road of the same path America is taking.

Jesus foretold as recorded in Luke 17:26-29 that it would be like it was in the days of Noah and in the days of Lot at the time God's judgment and wrath begins to fall. One of the characteristics that the apostle Paul gave in his "perilous times" prophecies as recorded in 2 Timothy chapter 3 is that people will be "incontinent." This means they will lack self-control. A further meaning is that they will be incorrigibly addictive - susceptible to violently craving fixes for their addictions.

A major addiction I perceive as becoming pandemic at this late hour of human history is the craving for pay without work by growing numbers of people in America and within the western economies. Socialism might be considered the virus that infects the masses who demand that the few pay for the many to enjoy the comforts of life.

Noah's time saw the mocking and the threats by the listless, vile masses toward Noah as he prepared the ark while preaching the message that they should repent. Lot, in Sodom, endured the vexation caused by the incontinent (sex-addicted) people who made demands that they be served night and day. Jesus said it will be like that at the time He will catastrophically intervene into the affairs of mankind at the end of the age. People will be addictive without control - "incontinent," as the KJV has it.

That "perilous times" characteristic of end-times man seems to be infecting this generation in many areas, and especially in matters of economy. The distress it is causing the nations, who are in perplexity as to what to do to fix the problems involved, will one day cause a tyrant of unprecedented power and authority to call for a one-world monetary system. I'm more and more convinced that it will be a system of Special Drawing Rights (SDR) - Electronic Funds Transfer (EFT) - that will be the computer solution he will concoct.

Monetary chaos is building across the world. I believe it will take a crisis of major proportion to get peoples around the globe to agree to give up their nationalistic, autonomous allegiances, in the desperate hope that their comforts might be secured/preserved/restored.

With the signals of the end of the age in every direction the student of Bible prophecy looks - including the addictive characteristic of humanity we've just examined - there seems good reason to wonder: Might the Rapture be about to serve as the instrument the Lord uses to bring about the crisis that will give Antichrist the excuse to produce his system of control foretold in Revelation 13:16-18?

A Deeply Divided Society: What Next for Thailand? - ABC